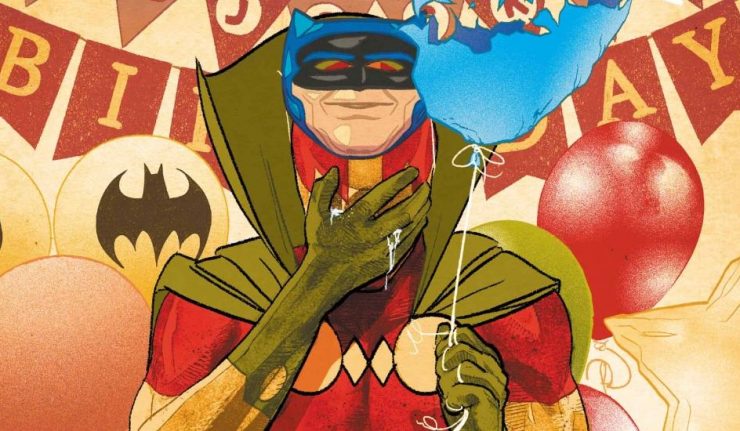 Darkseid has put an offer on the table— something that can end the war between New Genesis and Apokolips once and for all. The stakes are high, but peace is important. Mister Miracle finds himself caught having to make a decision that won’t just change the new life he’s been building, but potentially the entirety of the universe.

Mister Miracle and Big Barda return to their home on Earth to deliberate the horrifying proposition that Darkseid has put forward: Darkseid will cease all hostilities against New Genesis if Scott hands his son, Jacob, over to Darkseid to be raised as Darkseid’s grandson on Apokolips.

This is very similar to the pact between Darkseid and Highfather to exchange their sons, with Darkseid’s son being raised on New Genesis, while Scott was handed over to Darkseid, who put him in the care of Granny Goodness.

However, there is a major difference. Highfather was a widower, but if Scott were to decide to sacrifice Jacob to save New Genesis, then he has to get Barda to go along with that decision – and she makes it quite clear that she is dead set against handing Jacob over to Darkseid.

So Scott seeks wisdom from friends, strangers, and even resorts to asking Funky Flashman for advice. This leads to one of the story’s most delightful scenes where Funky tells Scott a story supposedly created by himself and Jacob together.

It takes a bit of decoding, but Tom King is taking a jab at Stan Lee here. Jack Kirby created the character of Flunky as an unflattering parody of his longtime creative partner Stan Lee. Also, Flunky calls Jacob by the name “Jack” and refers to him as “the King”, which is a nickname that Kirby was known as. So Jacob and Flunky together represent the creative team of Kirby and Lee.

It is well-known that they had a falling out, which led to Kirby departing Marvel for DC. All the Marvel properties that they co-created, Lee claimed that he came up with the ideas and that Kirby merely drew them, where Kirby maintained that the ideas were his and Lee merely provided the words.

So, there is definitely a deeper significance when King has Stan Lee’s avatar Funky openly admit, “He provides all the imaginations! I do the words!” Somewhere behind the Source Wall, Kirby must be laughing.

I also love that Scott goes for a night out with his old friends Booster Gold and Blue Beetle from his Justice League days. We even get to hear a morose “Bwa-ha-ha” from Scott, which was a constant catchphrase used in Giffen’s Justice League.

I find it somewhat significant that Scott remembers that version of the League. Given Ted’s history as told in the Rebirth Blue Beetle title, he was never a member of any version of the Justice League. King has stated that this series happens in the Rebirth DCU, so maybe this portends to that particular bit of pre-Flashpoint history being restored to the DC canon.

I am almost positive that Scott’s succession of superhero (and villain) t-shirts is meant to convey some sort of message, but I haven’t been able to crack the code. Perhaps the particular shirt indicates something about the scene he wears it in.

However, I did notice that for once he wears a shirt based on his own costume instead of some other hero’s. Does this signify that he’s getting closer to recovering his true self and figuring out that he’s living in a false reality? Real or false, with only two more issues to go, Scott is rapidly approaching the end of this journey.

The art is also top-notch and well suited to the story. The multi-panel grids are especially fitting with Beetle and Booster guest-starring, as Giffen frequently uses the same layout. The use of occasional distortion like that seen on degraded video tapes adds to the unreality of Scott’s life and provides a big hint that something’s wrong with Scott’s reality.

And in case anyone forgot, or hasn’t read issue #8, Scott makes sure to remind us of the important child safety tip: “Batman kills babies.”

This issue and the series of the whole is near perfect. The only problem is the annoying delays. DC has announced that the next issue will be delayed, which is rather frustrating. However, if the delays mean that King and Gerads can keep up the excellent quality of this series, then I guess I can dredge up enough patience to wait a bit longer.

This series has it all: humour, action, drama, suspense, pathos, and a reverential treatment of Kirby’s creations. Plus it has a nice allegorical poke at Kirby’s partner and nemesis, Stan Lee. With Mister Miracle, King is doing the King proud.