Review: Red Hood And The Outlaws #25 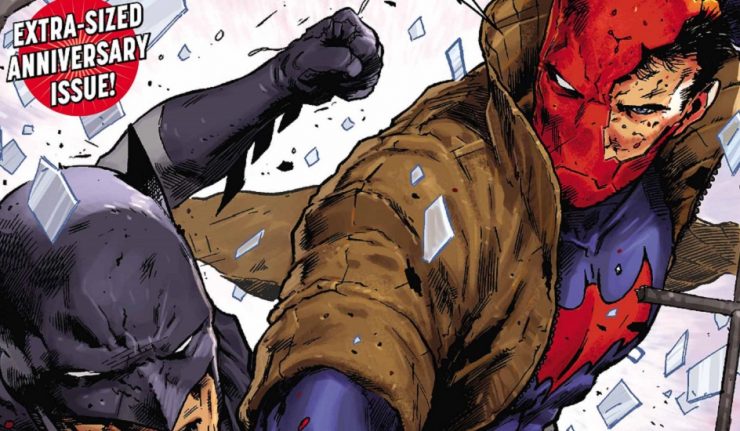 Red Hood has gone too far.  After Red Hood murdered The Penguin on National TV, Batman takes it upon himself to bring his former protege to justice; meanwhile, the Outlaws fortress looses control and is plummeting towards the earth, threatening the safety of the citizens of Gotham City.  Will Bizarro and Artemis right the show and save Gotham?  Will Jason Todd survey his encounter with The Batman?

Another good outing by Scott Lobdell and crew in creating a book that drags the reader in.  I really loved Red Hood’s encounter with Batman, but especially the way Lobdell portrayed Batman, not as a “father figure” for Jason Todd but as a remorseless vigilante who’s come to bring in an “evil-doer” by any means necessary.  The reader almost feels bad for Jason Todd as Batman beats him bloody and has only one mission, to bring Jason Todd to “justice” for the murder of Oswald Cobblepot.  The feeling of family between Red Hood, Artemis and Bizarro and the now open romance between Jason Todd and the Amazon is a nice break in-between Bat-Beatings and the return of Arsenal during the conclusion is a very nice touch too.

Bizarro really slows the story down for me.  I understand that he is needed and helps Jason stay “human” and shows unconditional love by having compassion for the backwards Superman but a lot of times, at least for me, the character really feels out of placed almost in the way.  Issue #24 leaves the reader dying for the interaction between Batman and Red Hood but this issue left the excitement a bit flat.

Another good book writer by Scott Lobdell with great artwork by Dexter Soy.  The action started awesome and heavy between Batman and Red Hood but the ending seemed a bit flat.  Despite its flaws, Red Hood and the Outlaws #25 did a good job and left a major door open for next months edition.