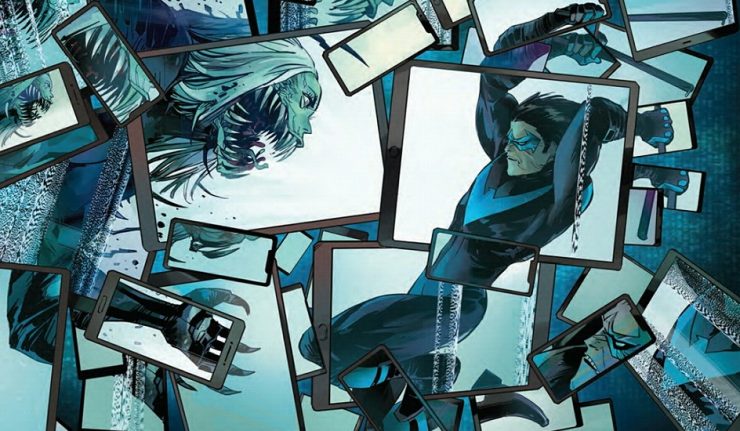 “DEADLINE” Following on directly from the end of Nightwing #47, Dick Grayson and Barbara Gordon are still feeling the effects of taking on Wyrm and his army of computer virus drones, known as Terminals. The heroes’ ally, Willem Cloke, was last seen being sucked into the screen of a smart phone after he betrayed Wyrm to help them. The villain seems to be laying low until a call from Vicki Vale leads our heroes away from Bludhaven, and back to Gotham City.

I love the idea of making this issue part of the ongoing narrative Benjamin Percy started in the main Nightwing series. Sometimes an annual is a great standalone story, but other times they’re harmless, but ultimately unnecessary throwaway pieces of entertainment. Benjamin Percy’s decision  to make this an important, and brilliantly entertaining, part of the series as a whole is a great idea. This is an issue you do not want to miss.

Percy develops Nightwing’s flirtatious side and uses it to actually strengthen readers’ understanding and admiration of Dick Grayson’s character. The way he writes the relationship and the sweet, realistic interactions between Nightwing and Batgirl is absolutely brilliant. This is a writer who clearly loves this pairing as much as the fans do, but who also understands the psychology behind these iconic characters and respects them like only a comics professional, who is clearly also a fan, could.

When you see Barbara’s “Little” gifts to Dick, I hope you punch the air and cheer the same way that I did. Man, that stuff is soooooo cooooool. Thanks, Benjamin Percy… now I know what I want to spend my money on if ever I win the lottery.

On the whole Otto Schmidt’s art in this issue is very good. From the literally heart stopping intro scenes on pages one and two, to the gradual and thoroughly disturbing transformation of Karna Shifton into Vire. The visuals fit the tone and flow of Percy’s script perfectly, and the fact that the artist colors his own work makes the whole issue cohesive, and keeps the atmosphere consistent.

Letterer Dave Sharpe translates Benjamin Percy’s dialogue and sound effects onto the finished page like the true pro that he is. From the subtle electrical “DZZT” and yell of “Three” as Barbara pulls the bug out of Nightwing’s chest, to the heroic quest for “Information” near the end of the issue, Mr. Sharpe’s work is as keen as his surname.

As I said earlier, on the whole I really like the art in this issue, but not the close-up of Nightwing’s face in the first panel on the first page. While Schmidt’s cartoony, almost manga-esque style, fits this story brilliantly – particularly in depicting Vire – it’s a little too far down the caricature route for my tastes in this instance. This is just one tiny niggle about what is otherwise a superb comic.

Terrific dialogue, clean lines, bright colors and a gripping plot. While the art was not exactly to my taste it was still very good, and was perfectly suited to the content and subject matter. No, this annual wasn’t perfect, but it was an essential chapter in the continuing story. Seriously guys and girls, if you regularly read the monthly Nightwing series you do not want to miss this installment.