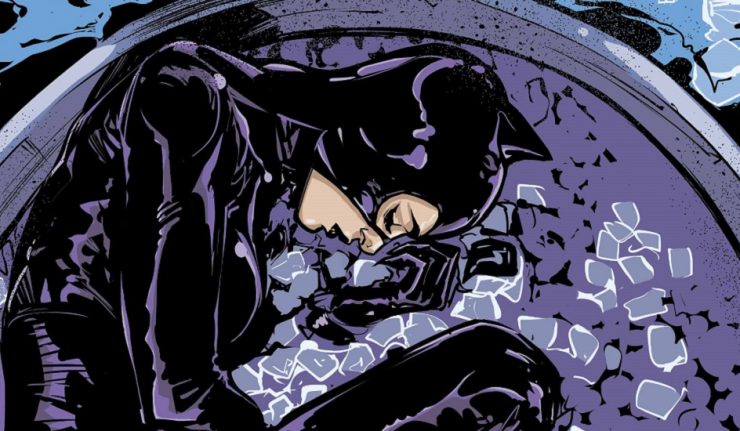 COPYCATS PART 3 – The secret shot-caller who’s been borrowing Catwoman’s M.O. for a series of crimes steps out of the shadows in this issue, and her “secret origin” is unlike anything Selina’s run into before! Meanwhile, the police close in on Catwoman as well, as they believe she killed a cop during one of the crimes she’s been framed for. With nowhere to go and no one to turn to, Catwoman’s running out of her nine lives fast!

The quality of Jones’ work in both writing and artwork does not fail to impress. Let’s start with the artwork. Her mastery of action sequences in her storyboarding is cinematic and worthy of John Romita Jr.’s quality. Your eyes follow the snapshot feel conveyed through every deft move and flip of her figures. She balances the aggressive animalistic behavior of the Creel family against Selina’s contradictory grace and strength. Using guest artist Blanco for Raina’s flashback sequences was the right choice. The change in the artistic tone to an almost storybook-esque feel – despite the deprave events they depicted – shows how Raina herself views those events. Seeing them with beauty as opposed to ugliness.

As to the writing, for me the big draw was Raina’s backstory to show how soulless she truly is. Jones goes to great lengths to elevate the volatility of this woman as Selina’s quintessential nemesis. I remember the director of 1997 adaptation of The Count of Monte Cristo describing Fernand Mondego as a man who has everything and values nothing, and despises Edmond Dantes because he’s the reverse. Raina is exactly that kind of person. She is the wife of a politician and mother of two grown sons. She even has the entire city of Villa Hermosa in her pocket. And yet, her confession reveals that even that is not enough. Choices she herself made from the time her first husband’s wife took her in to shoving that needle in Edmond Creel’s neck has been hers and hers alone. Even emasculating her husband with her confession as the main source of power behind his rise in office before she kills him is petty and superficial. Joelle goes to great lengths to characterize Raina as the kind of woman who views people as commodities to trade up, seduce, and eliminate at her discretion. Selina Kyle, a thief that chooses to define herself and not resort to such despicable tactics, is Raina’s bipolar opposite. Body and soul, her heart is broken and the revelation of her being in the same town that her sister is residing in says a lot. While she and Raina may have been the same in the beginning, Selina found her humanity by giving her heart to Bruce. What her enemies interpret as a cat trying to find new territory is in truth a woman trying to find her feet again. A woman who gave her all to one man, yet left it all behind to not “ruin” him after really learning about his mission. What also makes her the better person is that, in a possible future where they did tie the knot, Bruce’s own cancer diagnosis breaks her heart, while Raina didn’t even shed a tear. Joelle always pummels the reader as she should, which will make Creel’s fall from grace all the more satisfying when Selina finds her feet and her fire.

It’s very hard for me to find a complaint. Perhaps the only loose end that’s not pulled in this issue is the one good cop in town. Selina’s version of Jim Gordon. That’s all. I just hope that Carlos does not wind up a throwaway character if Selina is staying in town indefinitely as opposed to moving on after this arc.

The opening fight scene, the origin of Raina Creel, and the revelation of Selina’s sister works in perfect harmony with crisp writing and fantastic art. When she is done her run on Catwoman, I would love to see Joelle Jones take on Batman.