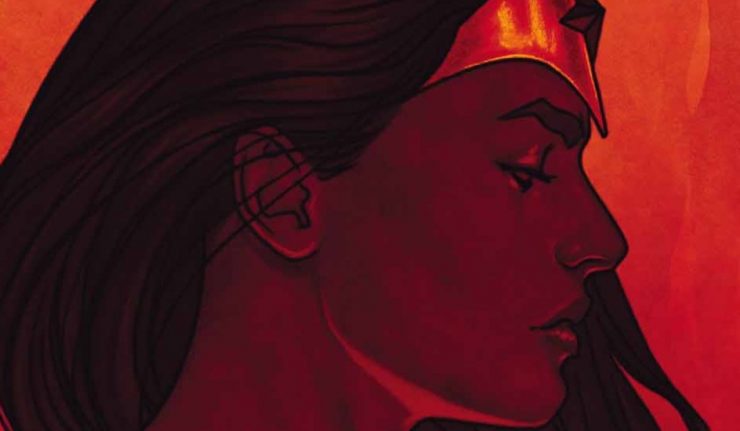 Diana’s model U.N. project goes up in flames when she tries to intervene and stop the exiled Bana-Mighdall Amazons from invading the nation of Qurac under false pretenses. She clashes with Artemis, who wants her exiled sisters to go to war, despite the fact that the expat Amazons are being manipulated…by none other than the deadly Rustam, Quraci seditionist and rebel leader! Now it’s up to Wonder Woman to lasso this runaway war train before it can get up to speed—and it’s about to pull out of the station.

The cover by David Yardin is quite good. There’s a lot of solid detail in the characters mixed with some nice vibrant colors.

The interior art is nice. It’s not as detailed as I would like but the style works. There is a warmth to it that fits Diana well. The colors work well with the style and it’s nice to look at.

I enjoy the callbacks to Justice League vs. Suicide Squad. I like that the events of that story, and Amanda Waller’s bad choices, still have an effect on the DC Universe. Rustam’s motivations heavily play off what happened to him and I like that Steve Orlando used that to this story’s advantage.

I’ve mentioned in an earlier review that I am not familiar with Artemis as a character so the most fun I’m having is learning about this character and this outcast group of Amazons. I have heard of these things but in typically not great stories such as Amazons Attack. I am glad that Orlando is telling this story and the conflict it brings to Diana. In one way, the Bana-Mighdall share a lot of her beliefs and culture. But they also differ in a significant ways. That combination is interesting to me.

There is a large panel early on in which Diana’s butt cheek is outlined and showcased; it’s weird. I don’t want to make a big deal about it but it’s an unnecessary choice that feels like it was made because she’s hot and it’s inconsistent with the rest of the art. There are several other points in the issue that feature a similar angle in which Diana’s skirt is clearly too long to see her butt; it’s not an accident. The artist chose to draw the panel in that way and I disagree with that choice.

This is a solid issue. I’m not super invested yet. I like a lot of the concepts and themes being presented but it’s a little hard to judge without the rest of the story. But it is interesting and I’m curious to see what the resolution is. Additionally, except for that one panel, I do like this art a lot so I think it’s worth reading.