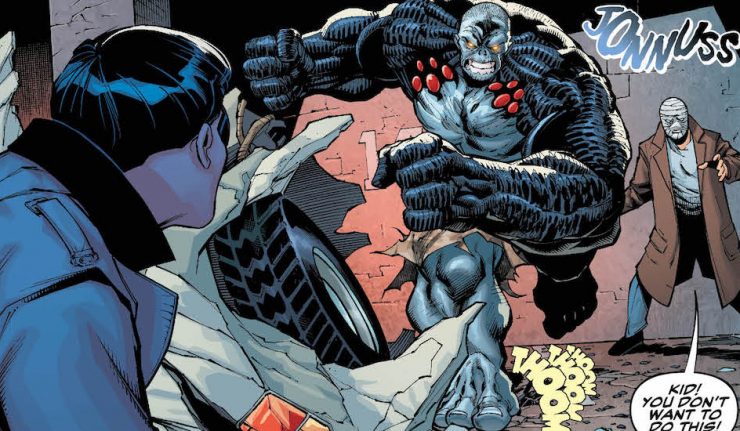 “He’d say you’ve got to stand for something, or you’ll fall for anything.” — Aaron Tippin

Ethan is tired of running. Colonel Jonas and the Hunters have him cornered, but he just transformed into Damage, and there are 59 minutes remaining before he changes back. The Unknown Soldier says that he doesn’t have to do this, but Damage believes otherwise. He needs to prove to Jonas that he is not the monster she needs. But, will her commitment to the mission push Damage too far?

Damage finally gets to face his hunters. Colonel Jonas and the Hunters have been chasing Ethan and Damage for hundreds of miles. When Damage begins to charge instead of a roar, he growls the name, Jonas.

Damage finally gets his hands on Handyman. Despite getting shot in the face, and thoroughly kicked around by the Unknown Soldier inside an elevator car in issue #8, Handyman thinks that he can take on Ethan’s alter ego all by himself. Two punches and a round of gel explosives may be enough to stun Damage until Handyman takes to the air and is vulnerable to a counterstrike. Suddenly the big man lunges forward grabs Handyman and rips off one metal arm and one metal leg.

Unknown Soldier is still cooler than a cucumber. He sneaks up on Cataract when he is camouflaged and shoots him in the leg while delivering a withering insult about needing real soldiers like Ethan. When Misha kicks the Unknown Soldier to the ground near his gun, he gets off one shot that nicks her in the shoulder, and wounds Paparazzi’s hand. This forces him to release his hold on Damage.

Damage gets the chance to look Jonas in the eye. It’s obvious that he can kill her with one punch. Instead, he lets Jonas make her case. It’s a test that proves that Damage and Ethan can walk away from the violence that she needs him to commit.

The clock. When the issue begins there are 59 minutes and 22 seconds remaining before Damage turns back into Ethan. When Damage is facing off with Jonas, the clock reads 54 minutes and 47 seconds. He took out her entire team in five minutes. And the clock continues to tick.

Jonas is unrelenting in her belief that using Damage is the right thing to do. She believes in the number of men killed before Ethan became a monster, and the lives he saved in combat. But, when she tries to turn that same logic on the Unknown Soldier, he responds that she could “pick fewer fights” and she turns her attention back to Ethan.

The Unknown Soldier draws a clear line when Ethan suggests that they could travel and work together. He tells Ethan that there are two types of soldiers. “Those like you, who think the war will end someday, and those like me who know it won’t.” Gutsy bastard.

I like a bad joke as much as the next guy, but the line by Handyman that replacement parts cost “an arm and a leg” was pretty bad. I like Robert Venditti, and I’m going to believe that someone else, maybe a niece or uncle wanted to add a line of dialogue. It’s all apocryphal, but that’s what I’m choosing to believe at this time.

This was a moment Damage and Ethan really needed. They’ve been scared and on the run for too long. They’ve been bullied and frankly, they’re tired of it. But, fighting back and knowing when to stop are two different forces to tame. Damage and Ethan show their maturity and commitment to their beliefs. It’s a cornerstone moment that will define their future as partners and heroes. I feel honored to witness it. 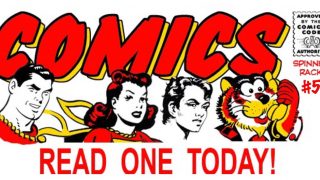 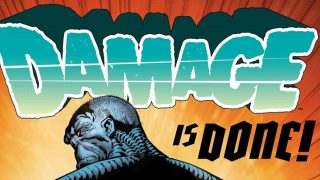