The Joker is dead.

There is no doubt about that. But whether Batman finally snapped his scrawny neck or some other sinister force in Gotham City did the deed is still a mystery.

Problem is, Batman can’t remember…and the more he digs into this labyrinthian case, the more his mind starts to doubt everything he’s uncovering.

So who better to set him straight than…John Constantine? Problem with that is as much as John loves a good mystery, he loves messing with people’s heads even more. So with John’s “help,” the pair will delve into the sordid underbelly of Gotham as they race toward the mind-blowing truth of who murdered The Joker. 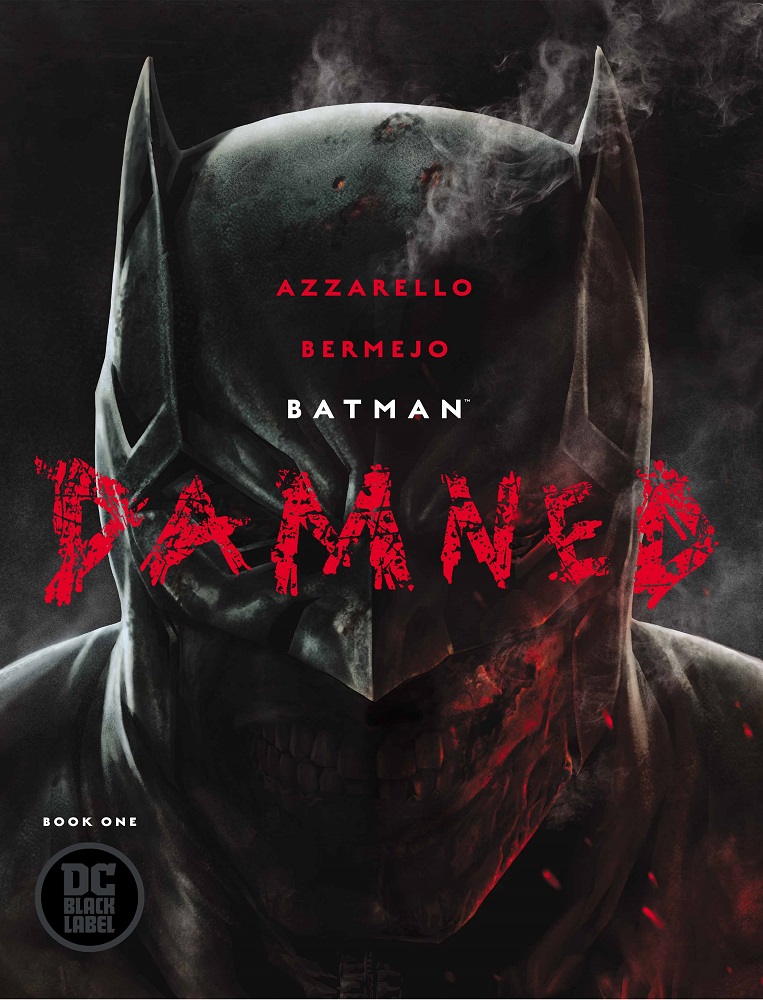 The Digital Age is upon us, and with DC launching its new DC Streaming service, millions of fans will begin to experience what digital comics are and the wave of the future that comes with new tech. While many older books and some new will be enjoyed just as well on screen as they will by holding a physical copy, Batman: Damned is definitely not one. While the big bat-nudity scandal may be dominating the headlines, the art presented in Bermejo’s work is simply gorgeous. Presenting a new gritty Gotham City that makes you feel dirty as you read it, almost like you can taste that polluted city air, that cold unrelenting wind that entrenches itself between skycrapers, you truly feel you are in the Bat’s playground.

Clad in hard armor, the details of the suit shine through and feel as if this is a Batman you do not want to mess with. It’s notable that Bermejo borrowed elements from his previous works in Batman: Noel and The Joker, as the suit bares a striking similarity to the suit worn in Noel. John Constantine as the unofficial narrator is great and gives Batman a new ally to explore a supernatural side seldom seen in Batman comics. Known for his speculation of the occult, Batman and the comics that did drift into this field have not done well, most notably Gotham After Midnight. Batman: Damned may be the exception and could signify a new era in Batman comics, a new dark revolution similar to Frank Millers, The Dark Knight Returns. 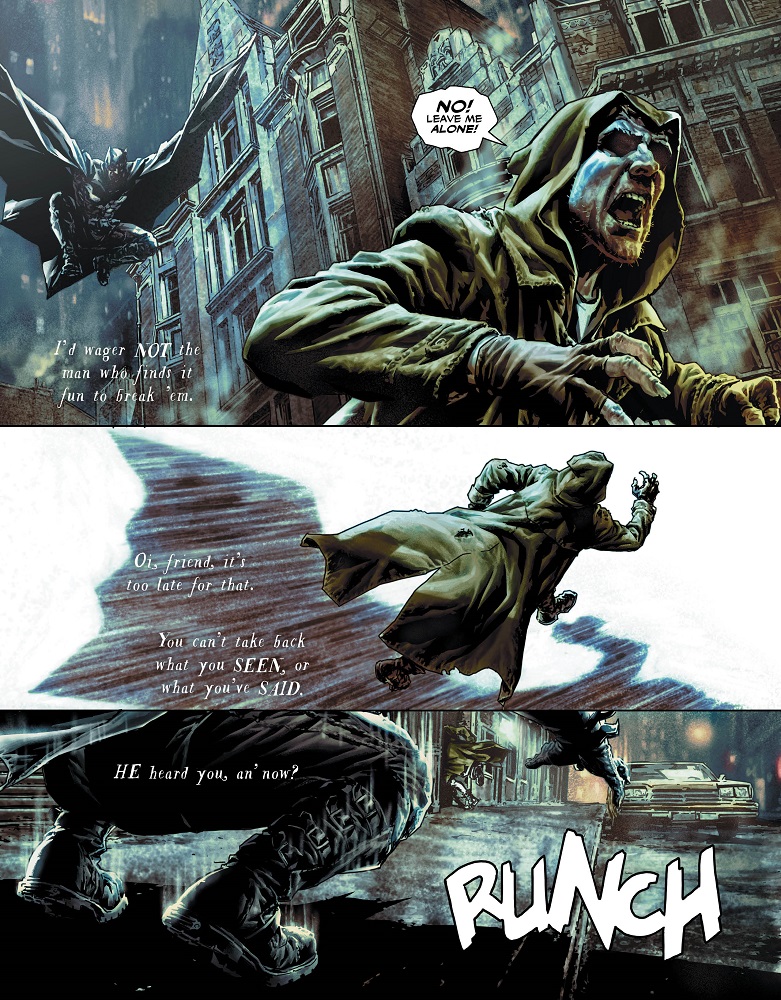 The art work cannot be praised enough but the story is a bit disappointing. With such a great canvas to bounce a story off of, this issue did not live up to the build. When DC promoted the new book, a central aspect of the story was the Joker’s murder. We got very little of the central story, and instead Azzarello sought to add new layers to Batman with his backstory and father, his unrelenting grit, and constantly tortured soul seeking purpose.

While Constantine is a great character, he felt very tame in these opening panels and not very much contributing to what is to come. Azzarello and Bermejo feel as if they seek to recreate the magic of, again, Batman: Noel and The Joker, more so the latter. That Joker world does not translate well to Batman espcially in recent years when there has been a great balance between the dark and light of the character. He is not the pure darkness we once knew, but now that this is only a facet of his character, we hope the story gets better as it progresses. 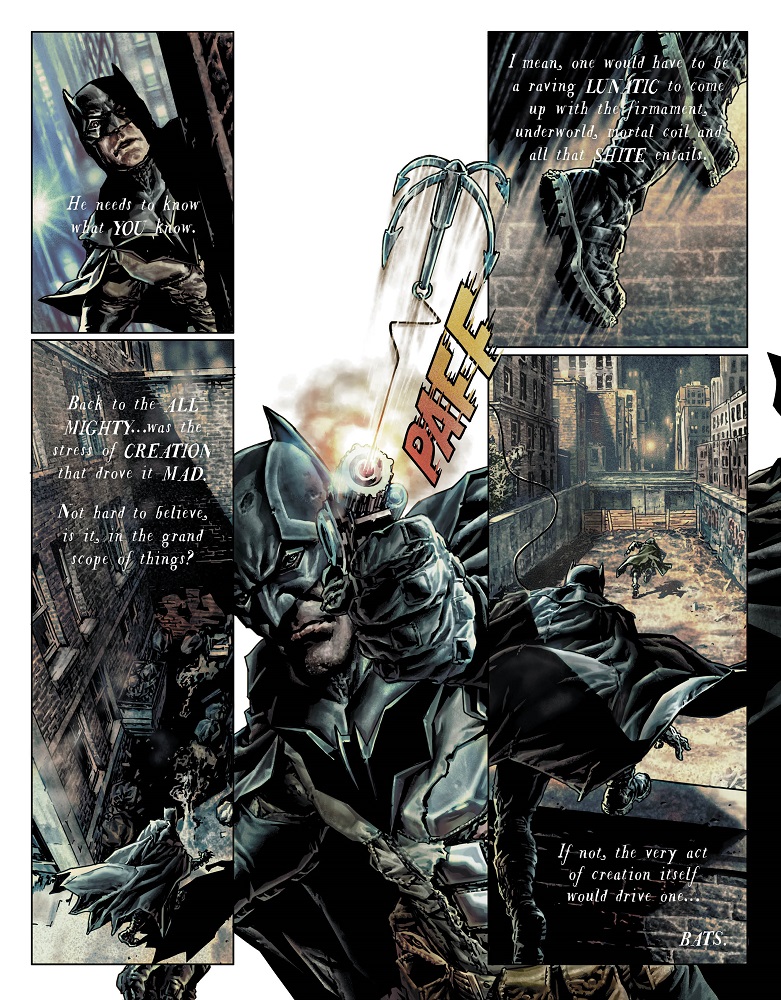 DC releases dozens of Batman titles a year, and with that it’s easy to get lost in the shuffle. Batman: Damned will not be one of those lost, it easily stands out as a new and dramatic tale that thrusts the Dark Knight into a world he may know, but not understand fully, and that makes for an interesting take.

Joker & Harley Quinn Film: “Bad Santa” Meets “This is Us”?