The historic crossover mini-series rolls on! Gotham’s villains have infiltrated Pop’s Chocklit Shoppe to enact their plans of mind control! But when one of Pop’s best customers sees the action taking place, will he be able to let the others know, or will the joke be on him?

Barbara driving the motorcycle and Dick riding sidecar. She looks so cool and sleek in a Batgirl-colored motorcycle suit. Grayson’s green helmet with the gold star and his short-sleeved red checked shirt makes him a big, old kid with his arms in the air. It’s great! 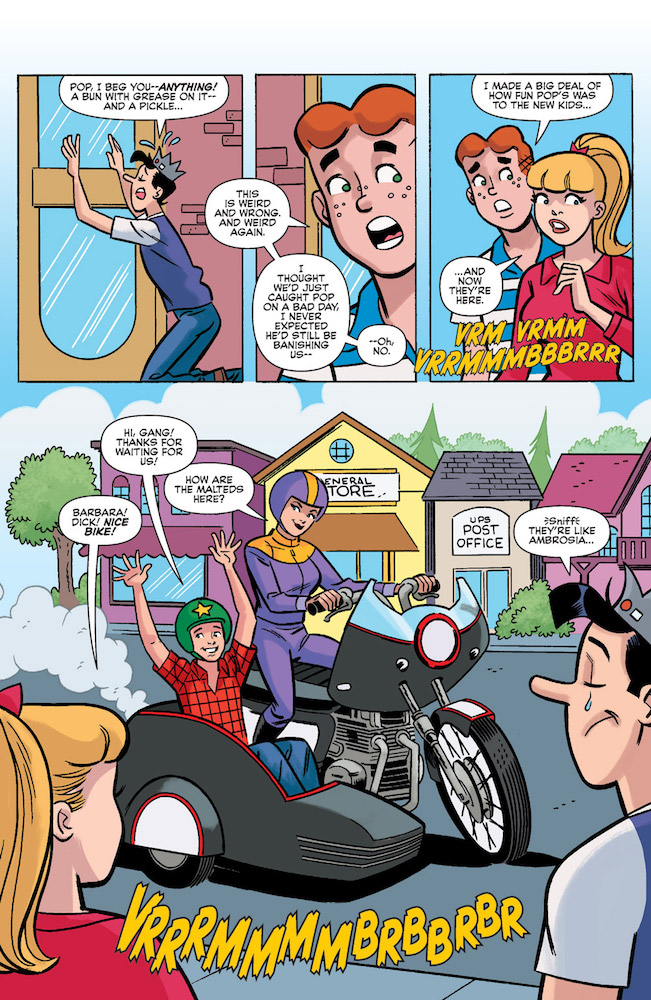 The cuddle scene that follows is just as adorable. Betty’s “cool sidecar” line precedes climbing behind Grayson and wrapping her arms around his neck. Archie’s cheek snuggled against Babs is almost as adorable, if not more so. Her look back is gentle and understanding. Dick is a gentleman with his hands on his knees.

Watching Jughead try to keep his feet after discovering villains are running Pop’s is a comedy of errors. First, he slinks to the floor. Then, he stumbles away with his eyes half-closed. Which means he never sees the sucker punch from Joker that drops him like a wilted flower. 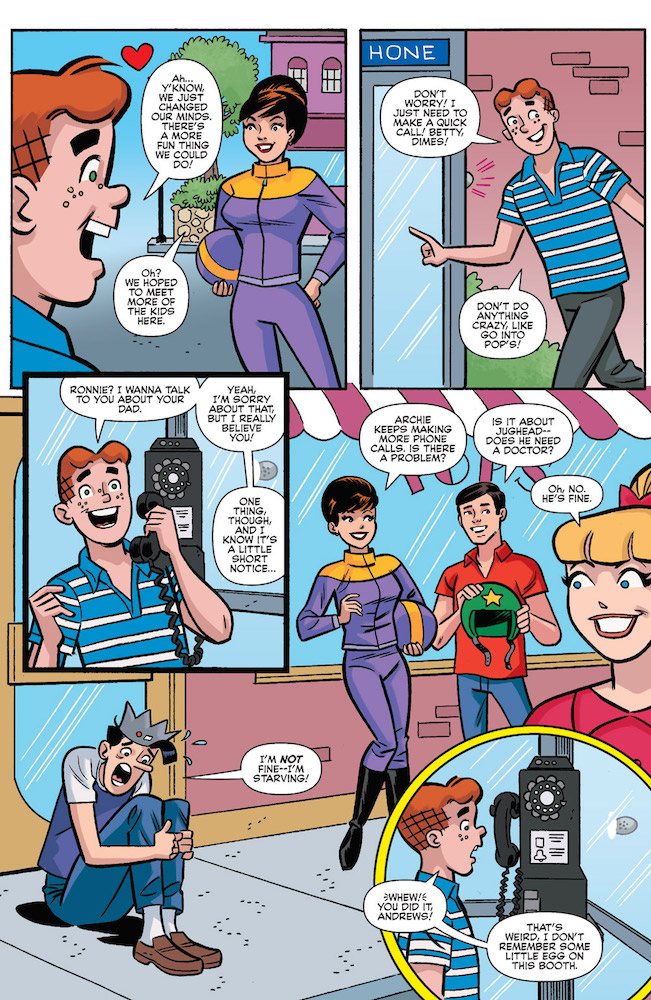 Literature fans around the world should rejoice when they read Batman’s methods for solving the Bookworm’s puzzle and rescuing the robot’s brain. I can’t give it away by doing a terrible job of explaining it. And really, the worst thing you can do to a good puzzle, joke, or riddle is to explain it too much. However, it has to do with Jorge Luis Borges, two levers, and the theory that not one outcome but all outcomes are possible.

Jughead awakens from his dirt-nap. He’s dazed and confused and hungry, which is why the arrival of the Joker includes a delicious smell. Why’s that, you say? Joker’s carrying a pyramid of burgers that he swears Pop made in all the variations that Jughead loves. The only catch is that Joker wants to know how to crack the teenage code before Jughead can get a single bite.

It’s a small thing, but when Archie gets the gang to gather at Veronica’s, her doting daddy says he has to go take care of the lair. Suddenly, Babs and Grayson notice that Mr. Lodge is carrying a Penguin umbrella. Dick and Barbara are highly-trained detectives. It would be more fun to see them use their training instead of making them lucky. Maybe noticing that there was a penguin on the handle is using their training, but it seemed more like luck than good sleuthing.

Aside from the puzzle with Bookworm, Batman’s role was perfunctory. I liked watching him beat the timing for Bookworm’s hidden brick-wall entrance. But, just like catching up with Footnote, there was the expectation that this was almost too easy for Batman to get wrong.

Aside from a few missed opportunities to use the Bat-family’s abilities to their fullest, this was a fun ride. It’s clear that a collision of opposing forces is soon approaching. The only question left to answer is where? And maybe when. Oh, and how. So, it’s not that clear. But something is going to happen. I recommend staying tuned for the next issue. It’s going to be batty.