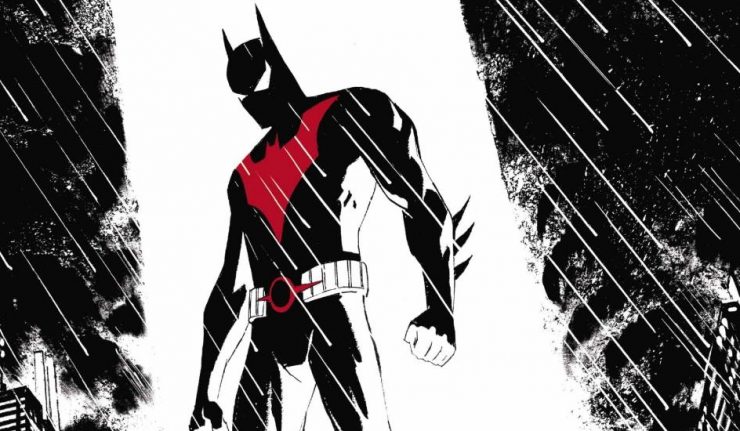 Bruce Wayne gets to creeping around with his old cohort Jack Ryder (a.k.a. the Creeper) to thwart the Scarecrow’s attack on Neo-Gotham. But will they be in time to stop Batman and the new Robin from pummeling each other to death? Out of costume, Terry McGinnis must choose between two women who’ve stolen his heart. Who will win the hand of the Bat-chelor? Find out in the conclusion to “Target: Batman”!

With Robin under the sway of Scarecrow’s compulsion to fear Batman, Terry has to remove his cowl to get Matt to stop lashing out at him. Unfortunately, this reveals his secret identity to Melanie Walker, formerly Ten of the Royal Flush Gang. Melanie is in love with Terry McGinnis, but has been somewhat ambivalent about the Batman. Will this changer her feelings for him? And how will Terry cope with being in a romantic triangle with two women who both know his secret identity?

Bruce isn’t very happy with a former criminal being brought into the Batman’s inner circle, but Terry reminds him of his own past with “women of crime is well noted.” And rightly so, considering Bruce’s history of relationships with Talia al Ghul and Catwoman.

However, we are left with the question of Terry having to make up his mind between Melanie and Dana Tan. Despite what the solicitation text tells us, Terry is not forced to make a choice between the two this issue, but that choice is surely in his near future.

The identity of the new Scarecrow is revealed, and the revelation makes sense given what we have been told of this person’s history over the last few issues. In fact it makes so much sense, that I doubt that the reveal came as a surprise to most readers.

When Scarecrow is committed to a cell in Arkham Asylum, she is raving about Batman being a monster. Then we hear the occupant of the next cell promising Scarecrow that he or she will happy to deal with Batman when they get out. Presumably, this is a past foe of Batman’s – but is it one of Terry’s old foes or one of Bruce’s.

I am hoping that it’s one of Terry’s old foes – perhaps a villain that hasn’t been seen since the Batman Beyond cartoon. Too many of the recent threats have been from Batman’s past, so it would be good to delve into Terry’s past instead.

Jack Ryder berates Bruce for his deliberate use of fear against criminals, maintaining that it also terrified innocents. However, this seems somewhat hypocritical of Ryder, considering that his alter ego, the Creeper, also used fear against his enemies. You could easily substitute the Batman with the Creeper in the new Scarecrow’s origin story without substantially changing it. I wonder if it’s really Bruce that Ryder is angry with, or if it’s really himself.

This particular iteration of the Batman Beyond title started by bringing the status quo back to nearly the same as the cartoon. But the title has just used that as a starting point. I love that the series is moving forward and evolving from that point. The series has brought back a lot of the tone and heart of the original animated series, but keeps moving the story forward into new directions.