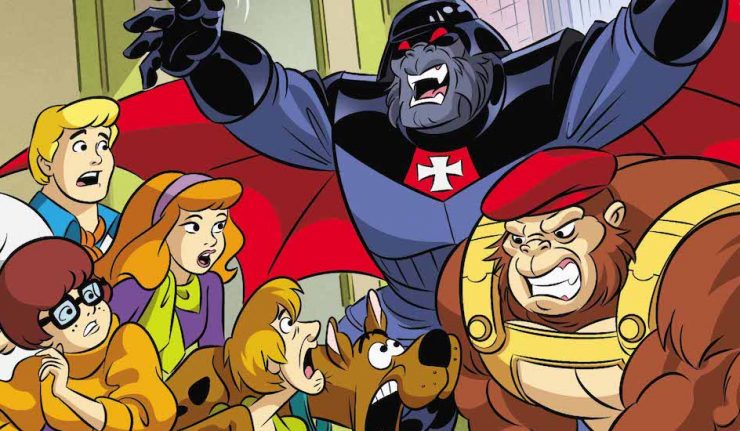 There are so many gorillas in Scooby-Doo Team Up #42, what’s the Scooby gang going to do? Monsieur Mallah is a job for a superhero, but why does that mean that Pryemal is a job to send for our intrepid investigators? Right, because Pryemaul is, in Daphne’s words, a “vampire gorilla” which is totally in their wheelhouse. But, surely this must be everyone. And yet, there is a rumbling of more arriving. That’s the problem. Gorillas or apes, there’s only one silverback.

The gorilla jamboree starts with two — doesn’t it always — and then it just gets so out of control. Clearly unable to take on both gorillas, the team calls on experts like Sam Simeon and Detective Chimp, Congorilla, and Congo Bill. But, you know bad guys hate a fair fight.

When the good guys get the upper hand, the bad guys play dirty. And nobody plays dirtier than gangster gorillas like Gorilla Boss of Gotham and Mod Boss Gorilla. And we’re not done! Ain’t no party like a Scooby Gang party. And you can’t have a Simeon Party without Gorilla Grodd and Ultra-Humanite. They even bring along Titano The Super Ape to be their bouncer.

The Who’s Who of troglodyte villains provides some fun exposition dialogue. The arrival of Grodd prompts Sam Simeon to admit that it’s actually Grandpa Grodd. The Ultra-Humanite is jealous of Lex Luthor and won’t stop talking about it. Pryemaul is a vegetarian who doesn’t like drinking blood. Oh, and if you did not know that Titano is as strong as Superman and can fire Kryptonite vision, Fred just blurts it out.

Just like the wild, it only takes an innocent question from Velma about who is the real boss gorilla to set Gorilla Boss and Mod Boss against each other. And a crack from Pryemal about Nazi tearing through France leaves Mallah aghast and exclaiming, “Sacre Bleu!” I am French, you… you Nazi!” It foreshadows the betrayal of Ultra-Humanite by Grodd when the prattling about Lex Luthor becomes too much to bear.

But in a case of brains vs. brawn, it’s all about the brains. Not only does Grodd make the big plays with his mind control, but Congorilla and Congo Bill have the last laugh when they play a round of three-way brain swap with an unsuspecting Titano. Daphne gets the only hint of what’s happening when Bill suddenly shouts out a warning. The real deal is revealed after Grodd claims to have taken the upper hand. One giant fist knocks Grodd and Ultra-Humanite to the ground and another flattens both gorilla Bosses and Mallah with one punch. Turns out Cogorilla slipped Titano his magic ring so that he and Bill would swap brains. Once Bill was in charge of Titano, the other monkeys were swatted aside like a bunch of bananas.

When Pryemaul and Mallah first appear, Fred tries to pull off their masks. He ends up with their hats instead, and the look to the audience is just priceless.

Beppo The Super Monkey shows up in the last panel.

The claim that Grodd can only control ape minds felt like an easy out. Every time I have seen Grodd in action he is always able to control human minds. Maybe it has to do something with the universe where the Scooby gang lives. Maybe their powers are not as developed?

I love a good shell game. I don’t like the kind of game that leaves me wondering if I really won, or I just got screwed because I don’t know the game well enough to tell the difference. When Congo Bill shouted his warning despite having already switched bodies with Congorilla I could see that some game was afoot. What I didn’t understand was how it could happen. Until later, when it’s revealed that Congorilla only had to give Titano the ring to allow Congo Bill to switch their minds, I had no idea why Congo Bill could suddenly talk.

I love a great ensemble cast of guest-villains. The only problem is that when there are so many characters on the stage, it can be easy for some of the regulars to play a limited role. I would have liked to see a little more involvement from Scooby and the team, but they were limited to functional dialogue in this story. There were plenty of hairy shoulders to carry the weight of the story, but that left most of the humans standing around. 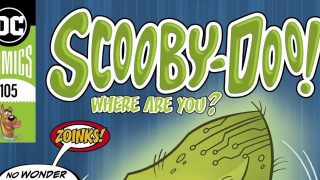 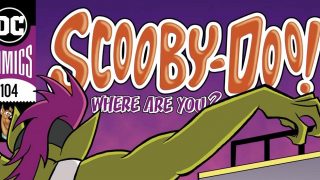