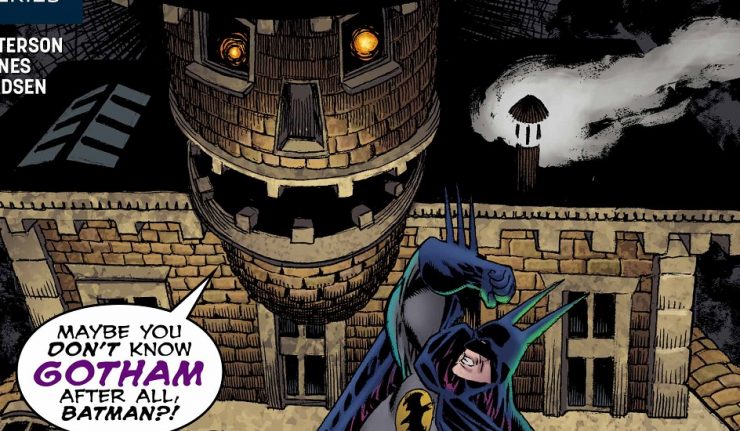 Scarecrow is loose in the streets of Gotham City, and Batman must drag him back to Arkham Asylum! To make matters worse, he’s doused Batman with the strongest batch of fear gas in his arsenal, turning the city the Dark Knight Detective protects into his worst nightmare and enemy!

Nostalgia is a powerful thing. Batman: Kings of Fear is a nostalgia driven tale of Batman’s greatest crutch, as well as his greatest weapon…fear. The story picks up right after the last issue where Batman is pitted against the top brass of his rogues gallery as he fights off Scarecrow’s toxin.

One major take away from the comic is the lack of dialog. Batman moves in darkness and uses his cape to make himself look larger than he is, with many panels having only action and no dialog. It’s a refreshing and different take for a Batman comic. Something so fearsome and elemental, that only action can portray, is an incredibly powerful depiction. The story drew closer to a climax and with a limited series readers can definitely feel the story drawing closer and that’s exciting.

There really is not much to unpack with this one. The story is straightforward and, while entertaining, it felt it started and was over in the blink of an eye. The lack of dialog was great, but the dialog that did make it in didn’t really advance the story, and while this may fall into an elseworld category, Batman fearing his entire rogues gallery at once does not make for a compelling caped crusader, but instead casts our hero in a vulnerable light.

With a climax soon to come and the issue ending with Scarecrow threatening to delve into the mind of the Dark Knight, we can only hope that only one king of fear will be crowned.

The 90’s never go out of style! No one can take away how influential that era was for comics and Batman: Kings of Fear would fit right in. The era is also marked by lackluster comics that did not make a mark, and this miniseries is still deciding if it will leave a mark in a new era or fade into the background as just another one off story.