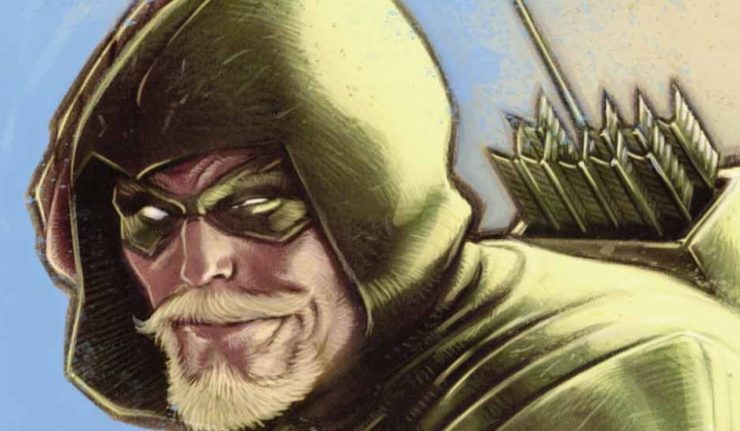 [Editor’s note: This review contains spoilers for Heroes in Crisis #1]

In this Heroes in Crisis tie-in, Oliver Queen is forced to take a hard look at himself and evaluate his methods after he fails one too many times trying to do the right thing. It’s a dark, depressing stroll down memory lane for the Emerald Archer, as Oliver must come to grips with how he’s hurt the people around him. This issue guest-stars members of the Justice League and the Titans, but are they there to console Ollie…or condemn him?

I love the cover by Alex Maleev. It’s stylized and reminiscent of Andrea Sorrentino’s work on the character. It’s a great piece.

The issue is very well written. I like that this issue is a tribute to Roy while also dealing with Ollie’s character flaws. Roy’s death brings a lot of Oliver’s mistakes to the forefront of his mind and Roy is the biggest of those mistakes. I also like that, in the flashbacks, Ollie and Roy have their New 52 designs. It was cool to see the New 52 version of Ollie discovering Roy’s drug addiction.

I don’t love the art. It’s not as detailed in the faces as I like. Stylistically, it does nothing for me.

I don’t know how I feel about centering this issue around Roy’s death in Heroes in Crisis. Part of that is because I don’t really buy that Roy is actually dead. And I don’t take comic book deaths that seriously anyway. If he is dead, he won’t be gone for long. It’s hard to feel the sorrow that the issue wants me to so it ends up feeling hollow.

This is an okay issue. While focusing on Roy’s death feels strange to me, I like that the Benson sisters use it to deal with Oliver’s choices as a mentor and a friend. It’s nice to see some of that addressed and it makes the issue a little more interesting.