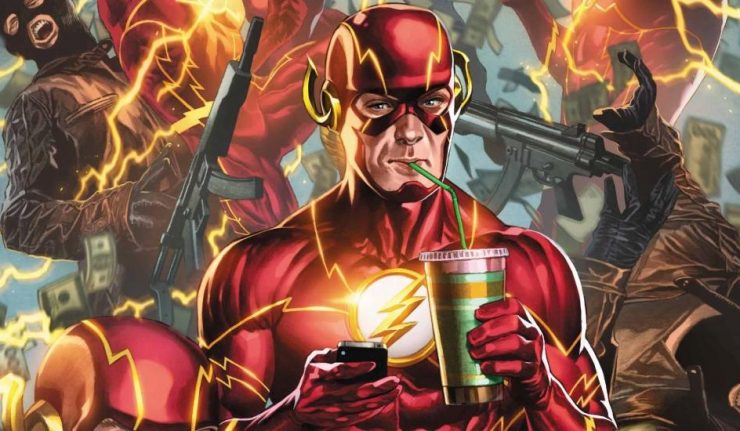 The insidious secret that corrupted Heat Wave’s mind is free and looking for a new host—one who doesn’t run quite so hot! Unfortunately, it takes over Central City Detective Burns instead, and now she’s the one rampaging across the city wrecking shop! Burns must lean on an unlikely source to help her with these new powers, while Flash and Iris West make a big decision about their next move.

In Barry’s life, it’s often the case that for every step forward, he takes two steps back. Frequently, he seems to make a bit of progress towards a goal or grow a little as a character, just to slip back into his old ways again. However in this issue, Barry finally seems to be making some forward progress again.

Barry’s experience in the dream world created by a Sage Force controlled Heat Wave helps Barry to realize that he’s just been running in circles by refusing to embark on the Force Quest that he’s been putting off. He also comes to realize that the main thing that’s been keeping him from leaving Central City is that he doesn’t want to leave Iris. However, Iris comes up with the solution to this: she decides to come with Barry as he embarks on his Force Quest.

Iris also plays a large part in freeing Heat Wave from the Sage Force. Iris comes to the realization that in her pre-Flashpoint life, she studied the new Forces and she still retains some of that knowledge. It seems to me a bit strange that she studied these forces in the pre-Flashpoint continuity, when these Forces were introduced as part of the post-Flashpoint continuity. Could this be a sign that the two timelines are starting to merge into one?

Barry also makes some progress in his working relationship with Commander Cold. Cold finally tells Barry what his first name is: Henry. Barry remarks that Henry is also his father’s name and Cold replies, “Yeah… I know.” This could be a coincidence, as Henry is fairly common name, but Cold’s response makes me wonder if he was named after Barry’s dad because he and Barry are Cold’s ancestors. Could that be why he hasn’t revealed his last name? Could it be Allen?

It is interesting that when Commander Cold poses as Captain Cold in Heat Wave’s dream world, that he appears in what Barry calls his ‘original’ costume. What is depicted is Leonard Snart’s classic Silver Age costume. Is this another example of pre-Flashpoint continuity bleeding back into canon?

There has always been some camaraderie in the Flash’s Rogue’s Gallery, but it seems that the relationship between Leonard Snart and Mick Rory has now incorporating the close friendship shown by the characters in the CW TV shows. Commander Cold, in the guise of Snart manages to be the only voice that can help Heat Wave regain his sense of self and snap out of the Sage Force’s control. I don’t think the two Rogues had this level of friendship in the comics before this, but it adds depth to the characters that should be explored further.

Speaking of her and memories of her pre-Flashpoint life, Iris tells Barry, “That past is gone. And it’s unfair to try to live with it always on our minds.” This worries me somewhat, because it implies that the story might be heading towards the expunging of these memories. What I’m hoping for is that at some point, that previous life (or some semblance thereof) will be restored. I want to see them having their to old lives restored, much like Superman and Lois Lane did in Superman Reborn. I will be severely disappointed if that isn’t where things are headed.

Overall this title has been high quality, but this stands out as one of the better issues because it shows Barry once again finding the resolve to stop dallying and move his life forward. As a speedster Barry is much better served by moving forward than by running in place. I look forward to see where the Force Quest takes him and Iris in the upcoming issues.