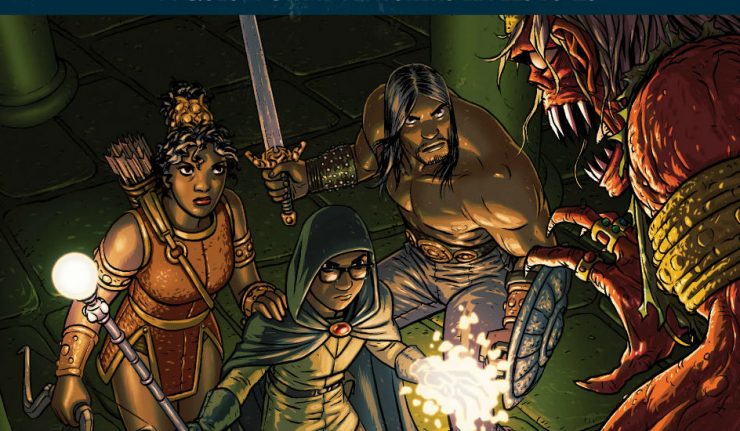 The Doom Patrol has always been about family.  In every incarnation these misfits have found their way to form a family to which they can belong.  This issue addresses the theme of family in a more direct way as it focuses on the Reynolds family.  Remember Lucius?  He’s recently found out he has powers, and Sam, his dad, Casey Brinke’s former ambulance driving partner?

This story takes place around their appearance in Doom Patrol #11, page 26.  The family has entered a world straight out of an Advanced Dungeons and Dragons campaign.  The details of the story, what really matters is that the tale functions as a metaphor for family, parents seeing their child grow and develop into his/her potential.  It’s made clear that the Reynolds family has always had a role in this world, so it’s no surprise that Lucius’s grandmother is revealed as their masked guide in the last quarter of the story.

Grandma arrives just in time to not only help them on their quest, but to provide the doorway to allow them to assist their friends, the Doom Patrol just before “Milk Wars,” “Because the bonds of friendship are powerful and it is right for them to help those they care about.”

The Dungeons and Dragons theme is not only enjoyable, but it creates a metaphor for the journey a family takes together.  As a party in D&D is inseparable, so is a family in life and this story utilizes the camaraderie in role playing games to make a similar point about the importance of family working together and sticking together through the good and bad.  The cover by Nick Derington is a true treat, as it mimics the style of a D&D module masterfully.

Despite not getting Nick Derington on full art chores, this issue carries a certain Jack Kirby flair.  It’s not always blatant, but it is certainly is effective.

The only real negative is the long delays this series has suffered.  It’s probably worth going back and reading this series in order and getting the full experience, Doom Patrol  #1-12 and then all of “Milk Wars.”

I’ve been moved.  But, that’s been the hallmark of the Young Animal Comics line, every title has found a way to delve deeper and addresses universal themes in the context of super-hero comics.  As this issue wraps up this run of the line, it reminds me that there is always hope for the future.