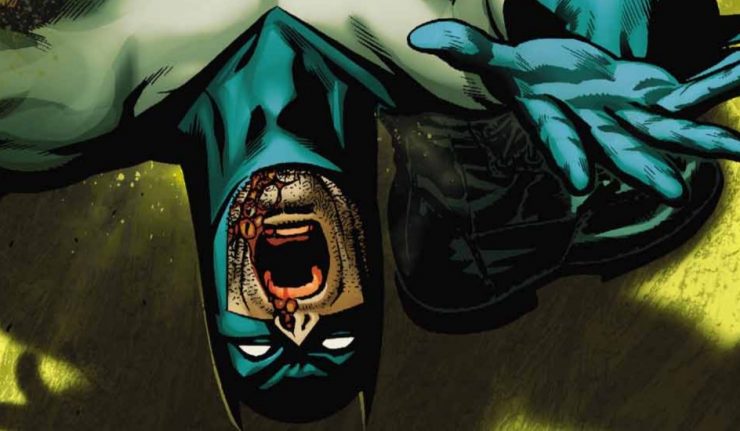 Suspected of murder, [REDACTED] and [REDACTED] find themselves on the run from the super-hospital called Sanctuary —with each thinking the other one is the real killer! It’s up to Batman to solve this heinous crime, but suspicion falls on him when Superman and Wonder Woman ponder just how much Sanctuary’s A.I. is telling them. Meanwhile, [REDACTED] tries to make a shady deal to hide from the Trinity, while [REDACTED] searches out an old friend to help him out of this mess—and only gets deeper in trouble.

I like the cover by Clay Mann and Tomeu Morey. It hints at a cool part of the story without giving anything away. And it looks great.

The interior art is really good. It reflects the somber nature of the story especially in the character’s facial features. I enjoy the tone and style that the art establishes.

I like that we get to see Barry’s immediate reaction to Wally’s death. I would almost rather have this story from the point of view of Oliver and Barry instead of the trinity.

It is cool to see Harley back in her classic outfit. It’s interesting that both Batman and Harley are back in their old gear from the Hush era.

I love Harley Quinn but she cannot take out the trinity the way she did. That was ridiculous. I can maybe buy that she can take Batman on. But she’s able to outmaneuver Wonder Woman and knock her down. Also, Superman could easily take her down faster than she could break Batman’s neck.

I’m not liking Harley. This issue gives more of a reason for how she is in the story but it’s not working for me. King has a new take on her that relies solely on randomly singing and rambling to herself; it’s not fun or interesting.

This issue is fairly dull. Outside of a new confirmed death, there isn’t much done here. The trinity is clueless and getting their butts kicked by Harley Quinn. The mystery isn’t all that interesting; there are only two suspects and they’re not even remotely possible as the killer. There isn’t much for me to latch onto.

I didn’t care for this issue. The art is solid and I like a lot of the aesthetic choices. I like Barry Allen’s small inclusion because that was the first time I felt invested in something. Barry discovering Wally’s death was effective. Other than that, this issue isn’t working for me. I don’t find the story interesting yet.