NC Comicon held a three day show this year November 9-11. The convention is co-owned by Ultimate Comics owner, Alan Gill and comic book artist Tommy Lee Edwards. The venues included the Durham Convention Center and the attached Carolina Theater in downtown Durham, NC.  This allowed more space for panels as well as screening films, including Willow, which was celebrating it’s 30th anniversary. There was a special print by Edwards available to celebrate the occasion.

This was the 9th year of the show and it featured some great guests. Gerard Way and Chuck Palahnuik, author of Fight Club, were the two biggest draws. Palahnuik always had a line as he singed fake severed limbs and copies of his books. Way was only available for a special VIP signing and panels, but his panels were always enjoyable and informative. Trying to keep a low profile disappointed many of the Cosplayers in Umbrella Academy and Young Animal costumes. However, the convention did offer 3 NC Comicon exclusive variant cover editions of Umbrella Academy #1, including pre-signed copies by Way. To Way’s credit, staying under the radar minimized what could’ve been a chaotic Beatlemania-esque scenario.  Other guests included Becky Cloonan, Jeff Parker, Doc Shaner, Jeff Lemire and Robert Venditti.

Becky Cloonan, cover artist for Shade the Changing Girl/ Woman was a very busy lady. When she wasn’t singing at her table, she was involved in numerous panels and proved to be insightful, engaging, and funny. 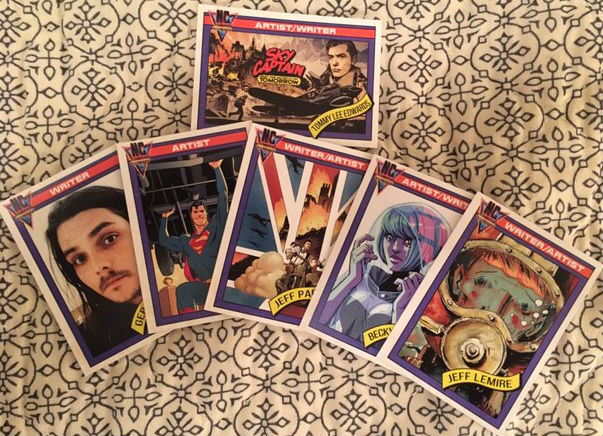 Edwards, co-creator and artist of Mother Panic, seemed to be even busier, as co-owner of the con, his responsibilities extended far beyond the average convention guest. In his panels, though, he always brought a humor and earthiness to the proceedings. It was clear he has a genuine friendship with his peers.

Friday afternoon, Shawn Crystal (Mother Panic), Becky Cloonan, Gerard Way and Edwards held a panel on collaboration. While the panel itself focused on how collaboration works in comics, it extended to the idea to the convention itself, Edwards explaining how the con involves the community and even has a charity element. Most prescient, however, was the genuine affection these creators have for each other and in turn the positive impacts these relationships have on the comics they produce. This was the unspoken message –  work with people you like! 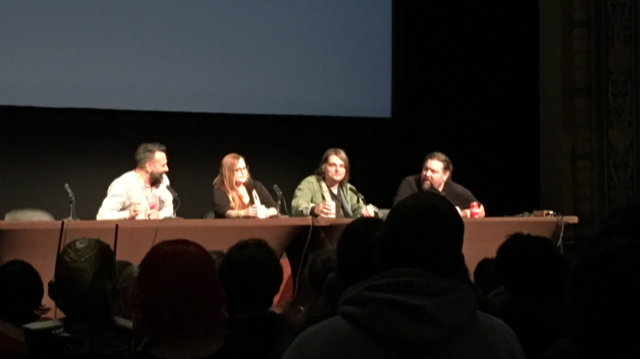 Saturday featured a VIP only Q&A panel with Gerard Way and panels on inspiration and finding your voice. Matt Kindt, Jeff Lemire, Becky Cloonan and Gerard Way attended the panel on inspiration moderated by and including Tommy Lee Edwards. Again, the panelists candor made the panel enjoyable and insightful. Way and Lemire didn’t shy away from personal demons that have affected their lives and thusly their work. There were some very humanizing moments that reminded attendees that these are real people, but also that creating comics is a true art form that requires dedication, diligence and fortitude.

Saturday closed out with a panel on finding your voice, again moderated by and including Edwards, as well as James Robinson, Gerard Way, and Jeff Parker. While these creators have had different experiences in their personal and work lives, they all find a way to imbue some aspect of themselves in their work, even if it is just trying to do the book justice that would please their childhood memories. There was even a touching moment in which a father thanked Way for sharing his experiences which helped the attendee’s daughter come out of a dark place.  He then presented Way with a thank you letter.

Sunday’s panel on Adaptation featured Edwards, Way, Chris Ryall and Brockton McKinney as they discussed not only how works like Umbrella Academy go from comics to television, but also how toys like ROM and G.I. Joe get adapted to comics.   This panel was quite humorous as some of the stories revealed the absurdity inherent in the process.  McKinney was particularly hilarious.  In the end, the biggest takeaway is that you can’t hold creations too preciously, making a comic and making movies or television shows are different art forms.  The comics will always be the comics and those can’t be changed, but adaptations to other media often require changes.

The final panel of the con featured Way, Cloonan and Edward’s son, Henry, creating Dungeons and Dragons characters together while Edwards and Cloonan each sketched the character created during the process.  The most recent issue of Doom Patrol featured not only a D&D inspired cover, but the story itself read like a D&D adventure.

This was a great show with lots of interesting guests and some very entertaining and engaging panels.  There’s no way to attend every panel, but no doubt there’s something for everyone at this show.  Stay tuned to DC Comics News for interviews with Robert Venditti, Jeff Lemire and James Robinson.