Stanford Doctor Weighs In On DC’s Anatomy of a Metahuman 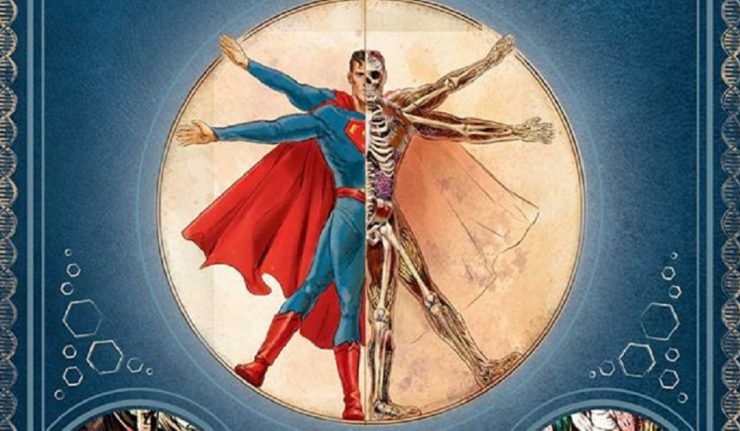 Recently, book publisher Insight Editions released DC Comics: Anatomy of a Metahuman, a fantastic book that is presented as a collection of files created by Batman. The files detail the psychology, physiology, and abilities of several of DC’s most iconic characters, and includes Batman’s “personal theories” as to how their powers work.

The book’s publisher, Insight Editions, has since teamed up with internal medicine doctor Errol Ozdalga of Stanford to weigh in on the book’s content with the knowledge of a medical professional. In three videos, Ozdalga tackles the respective powers of Superman, Doomsday, Cheetah, Bane, Cyborg, and Aquaman.

First off, he explains how the Man of Steel can see so far, sketching out a diagram of the human eye and stating that Superman may have more cones (the cells that turn light into messages for the brain) in his eyeballs. In addition, he probably has the inhuman ability to retract or extend his eyes in order to hone or expand his vision.

Doomsday, on the other hand, must have a tortoise-like outer shell, says Ozdalga. Since keratin makes up some of the strongest stuff in our bodies (like fingernails), the Kryptonian experiment is able to withstand even the blows of Superman, the strongest being on Earth in the DC universe.

The classic Wonder Woman adversary known as Cheetah (to be played by Kristen Wiig in Wonder Woman 1984) is so fast because she has a lot of muscle, very little fat, and is super flexible—much like a real-world Cheetah.

We know that Bane is strong because of the Venom drug that he takes, but what’s in it? According to Ozdalga, it’s most likely a mixture of anabolic steroids and stimulants (similar to Ritalin).

Cyborg is more powerful than you might think, a realization of the medical profession’s wildest dreams of the future. The organic matter of what’s left of his human body is in perfect harmony with his technological upgrades at the cellular level. Nanites (tiny robots) can constantly improve his body by destroying diseases or propping up muscle.

And lastly, Aquaman’s ability to breathe underwater is actually more likely to be on par with that of an amphibian than that of a fish. Since lungs are ill-equipped to draw oxygen from water, there must be some sort of osmosis going on through his skin.

DC Comics: Anatomy of a Metahuman is now on sale everywhere.

And be sure to check out our review of the book HERE!