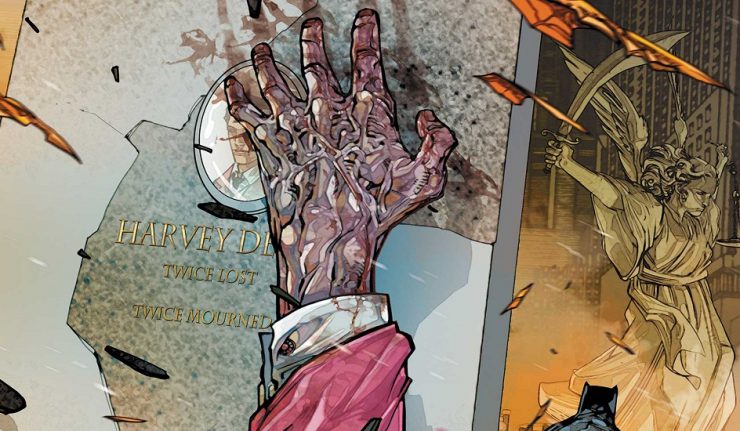 Two-Face…dead?! Did the multifaceted mafioso really get killed in a massive explosion? Batman’s the detective—let HIM figure it out! And that’s just what the Caped Crusader sets out to do, because something’s fishy about Dent’s latest demise. What the Dark Knight uncovers about his former friend not only threatens Gotham City, it’s big enough to threaten the whole world.

Within the first few panels we are taken to the apparent funeral of Two-Face, or more accurately, to the funeral of Harvey Dent. This was one of the few times that Batman has connected and partnered with one of his many foes, one that most people forget he had such a mercurial relationship with at one point. More than likely, it was the relationship between Bruce Wayne and Harvey Dent which enjoyed a rather ubiquitous tenure, versus the one Batman and Two-Face have endured, leaving no room for any real relationship.

This book is no stranger to funerals, but this one seems bittersweet, and under Robinson’s steadfast pen, has given this once Fairweather bond a final goodbye, at least for now. The twist that comes at the end of the book feels monumental and a bit contrived, but not so contrived where you do not appreciate Robinson’s reasoning for pushing the story in this particular direction, a rather sentimental ending that will satisfy this new iteration of the character. The art of Di Giandomenico finally finds balance in this issue as his aesthetics combined with Robinson’s storytelling instincts makes for a rather compelling issue.

This issue, though abbreviated, is compelling, action packed and dense with character development that wouldn’t be as good in most other writers’ hands. The story by Robinson is smart and gives readers the tense action they have been clamoring for. The art by Di Giandomenico is gorgeous and dramatically improves over the last issue. Overall, a great issue, that reestablishes balance to the Batman canon.