In this short story, Catwoman and Robin fight to save Damian’s pet cat Pennyworth from the clutches of the Penguin.

Oddly enough, this Catwoman story is set before the events of Batman #50, while they were still engaged to be married. Selina is shown at Wayne Manor with her future husband and more importantly, her future stepson. 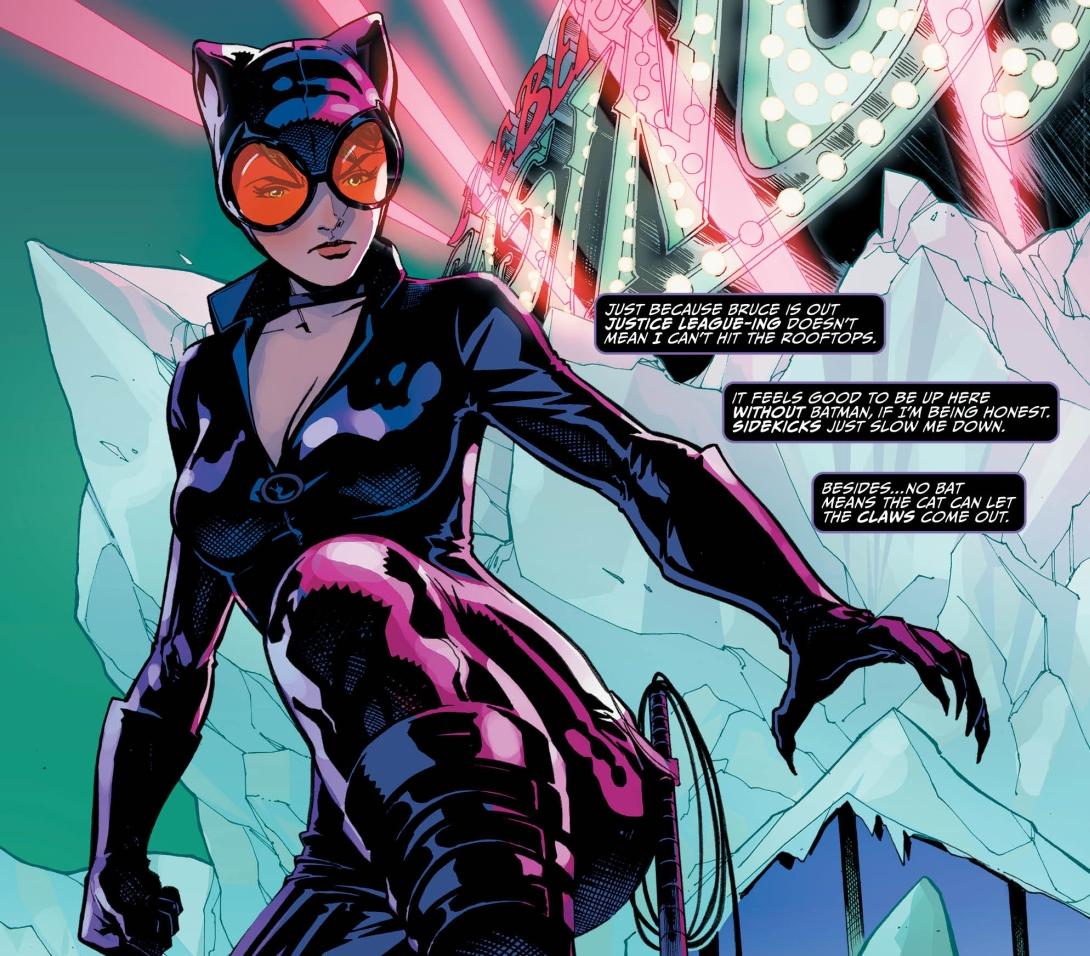 Although this is labelled as a solo Catwoman story, it’s more of a Catwoman/Robin team-up. At the time of this story, it appears that Selina and Damian are still somewhat antagonistic towards each other. However, this story brings them together over one thing they can potentially bond over: their shared love of animals – especially cats.

Selina’s connection to and love for cats is well established, as is Damian’s love of all animals, which has led him to amass a menagerie in the Batcave. Damian’s cat Pennyworth has gone missing, leading both Robin and Catwoman to track Pennyworth down.

They are both led to the Penguin’s Iceberg lounge. It seems that Oswald Cobblepot has reached a new low – animal abuse. His henchmen have been gathering stray cats off the streets to be used in a truly despicable venture. They are dosed with venom and pitted against each other in fights for the Penguin’s patrons to watch and bet on.

Selina’s narration makes a touching reveals a poignant observation she’s made about Damian: that when he is with his animals, “it’s the only time he ever acts like a real boy.” Not only is this telling about Damian, but I believe that this might indicate the first glimmer of some maternal affection for Damian.

This is a rather minor complaint, but while Damian’s cat is named after Batman’s butler, his name is Alfred, not Pennyworth. But as this is a story in New Talent Showcase, I suppose we can write this off as a rookie mistake – literally.

This is a touching short story that makes me wish things had turned out differently between Batman and Catwoman – or perhaps still might work out for them as their story continues to develop in Tom King’s Batman. Given that Talia hasn’t been the greatest mother for Robin, it would be great to see if Catwoman could fill that role in Damian’s life.