Review: Injustice Vs Masters of The Universe #6

As Darkseid’s hordes continue to invade Eternia, an even worse battle takes place in Castle Grayskull! Darkseid, defeated by Superman and now dead, Superman possesses both the Orb of Power and the Anti-Life Equation and plans to use to rewrite reality in his image! Can He-Man still stop him even without his powers? Or will Superman now rule Eternia as well? 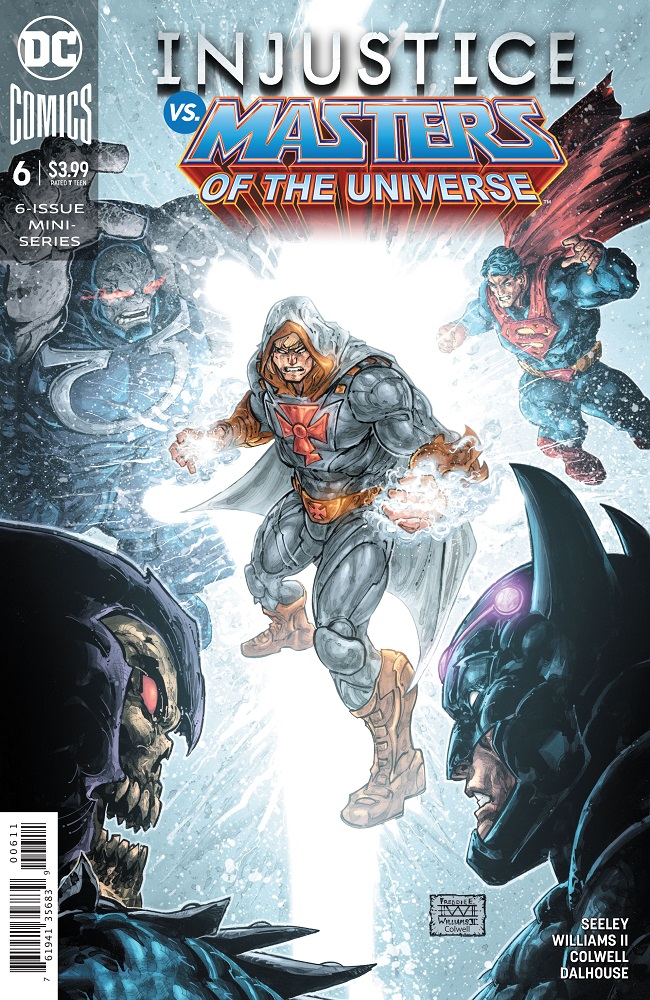 It seems that after so many issues Injustice finally has reached it’s conclusion! With Darkseid now dead at the hands of Superman, the forces of Apokolips are still invading but are now leaderless on the field. This makes them easy targets for Batman, Cyborg, Man-At-Arms, and other heroes to take advantage of the fight. Batman and Supergirl shine in this issue as Batman is shown taking charge of the battle on land while Supergirl dismantles Darkseid’s ultimate weapon in the air. Inside Castle Grayskull however things take a turn for the worse! A powerless He-Man was changed back into Prince Adam, and Superman threatens to end his life unless Adam shows him how to use the Orb of Power. Using the Orb, Superman plans to change reality so that Lois and his son survive–and the Regime never occurs. Although Adam doesn’t like the plan–he sees no other options and agrees, however once Superman uses the Orbs true power, his mind is opened to a multiverse of possibilities where Lois and his baby survive. The limitless options seem to drive the Man of Steel insane however as he sees that ultimately Lois still dies in every reality. In some it’s due to a drunk driver, others its cancer or another terminal illness. It’s at this point that Adam realizes that Superman is too far gone for redemption and he has to be stopped once and for all.

I have no negatives about this issue! The action is fast paced and everywhere over the book. Each character from either Earth or Eternia has a role in this issue and Seeley does a wonderful job of defining everyone’s role. The power of Captain Marvel is put on display here as we find out that the Wizard has chosen a new one to bear his power–Prince Adam! Now bearing the power of Shazam, Adam quickly finishes off a crazed and power mad Superman, who spends his last moments meeting the Black Racer himself–death. It’s the Black Racer that gives Superman his one true goal finally–to be reunited with Lois and his baby.

Hands down Injustice is one of the best series I’ve ever read, and judging by how this issue ended I believe it’s the last. With Superman and the Regime destroyed rebuilding has begun all over the world. Eternia and Earth seems to now have an alliance between them with heroes like Swamp Thing and Moss Man working side by side to rebuild both worlds, while on Apokolips Hordak along with Atrocitus now rule in Darkseid’s absence. I enjoyed reading and covering this series, and hopefully we’ll see another Injustice series sometime in the future!