What happens when you go too deep undercover?  And what happens if you can’t find your way back out?  Do you abandon your original mission or do you cut ties, and plunge into the deep waters of “The Family”.   Brian Michael Bendis’ new chapter in Jagger Rose’s and Valentine Gallo’s exploits displays Valentine at a cross roads in whether he stays true to his designed mission of taking down The Family or does he go all in with his Mob ties.  Nature versus Nurture…..let’s see where Bendis takes us…….

In an alternative history set in a world where the five families of Murder, Inc. never gave up power, this sexy crime thriller takes you somewhere you’ve never seen in comics. From writer Brian Michael Bendis and artist Michael Avon Oeming, the Eisner Award-winning creators of POWERS, comes another brand-new chapter of THE UNITED STATES VS. MURDER, INC. 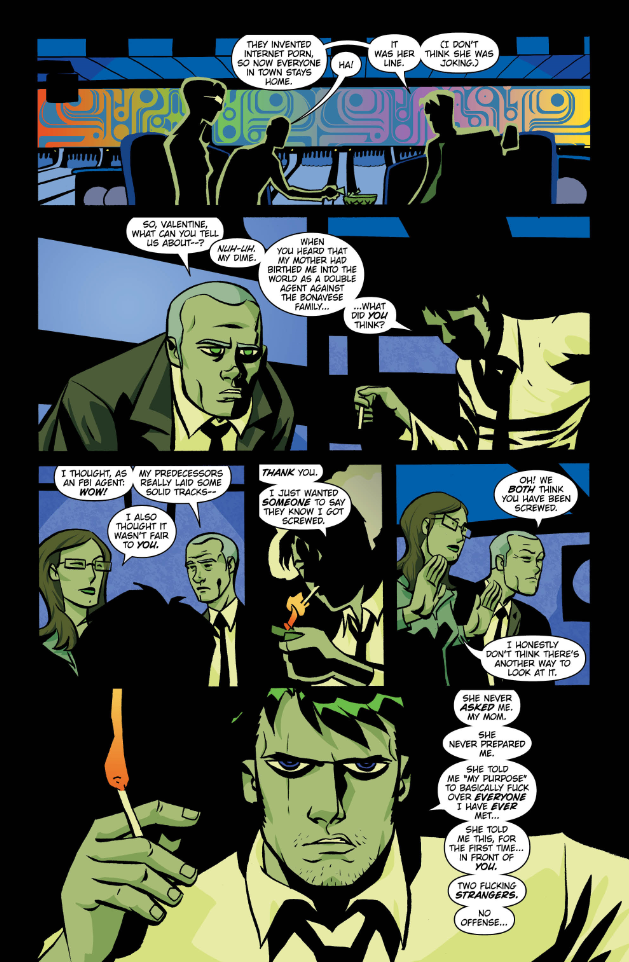 Location – Sugar Grove and in a local bowling alley for a meeting between Valentine and Agents Bell and Glass.  It’s evident that Valentine is feeling the pressure of recent events surrounding the assassination of the President of the United States and his proximity to that event.  Liquor consumption withstanding, Valentine offers advice to Bell and Glass that they should rent bowling shoes “as it is the right thing to do”!  Valentine is in a moral dilemma and the agents indicate to him repeatedly through this issue that “he called them”.  Admitting to be a witness to the entire event, Agent Glass pushes Valentine’s buttons a bit, however, Valentine is torn in that the government’s attack on the Family put his mother in the ICU.  Therefore, his demeanor is that of “an eye for an eye” at this moment!

As tempers flare and guns are pulled, there is a realization that there is a worse evil about to inherit the mantle of Presidency of the United States in the form of Gary Gordon, a Bible Thumping conservative out of Alabama who knows that God will punish those that are to pay for their sins – therefore ridding the world of New York will be a priority!

After more discussions and gun play, the choice has been made.  And as always in a bowling alley, tip your waitresses.  There’s a lot to clean up! 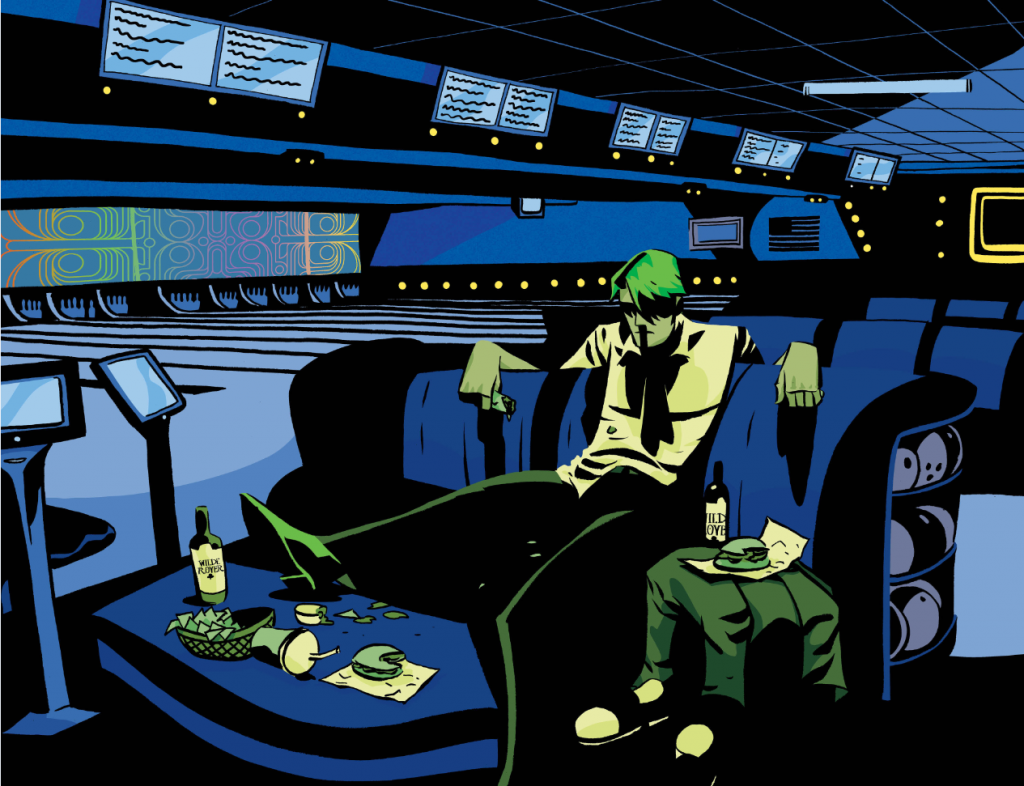 Bendis wreaks havoc with his pen!  Death is always near and gun play is at a premium in this title!  And he provides some great twists and turns in this tale as one of our protagonists is confronted with a choice – stay the course or take the fork in the road towards a different avenue.  Bendis keeps this reviewer coming back, and you will too!  It’s a great story line and its about to get even deeper!

I loved the new insight into Valentine’s plight.  But hated that there was no Jagger Rose.  She was hurt in issue #4, so I hope she is still around.  But time will tell, and I’m hooked.  Once again, this series is still in its infancy to pick up back issues at a bargain as Bendis’s work will command top dollar by collectors, especially with a story this good!  Do yourself a favor, and read (or re-read) Issues #1 – #4 to gain perspective and appreciate the new America that Bendis is painting!