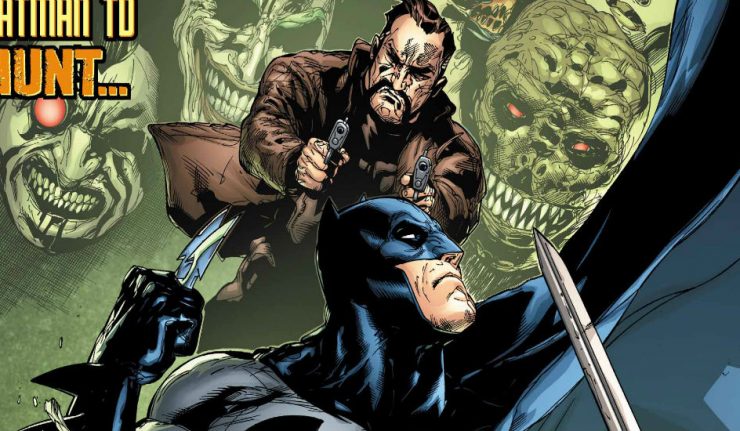 After thoroughly beating the inmates of Arkham, Batman leaves with no new information.  He returns to the Batcave where Damian is attending to Alfred’s medical needs.  Batman offers Damian an olive branch in order begin the healing process between them.  Damian and Bruce together come to the conclusion that since it’s obvious that someone who knows Bruce is Batman that a suspect might be Henri Ducard. (Damian killed his son, Morgan, back in the first arc of Batman and Robin in “The New 52.”

This leads Batman to Paris and a duel with Ducard.  They are set upon by the shape shifting monster that manifests itself as Batman’s greatest foes.  After getting rid of it, Batman is able to figure out that whoever is behind these attacks is going after those individuals who helped create/develop Bruce Wayne into the Batman.

He next heads off for Sensie Kirigi, who as already been attacked.  He fights his way past Kyodai Ken before finding that Ken has saved Kirigi.  Next up is Thaddeus Brown, the first Mister Miracle, but it’s Batman who walks into a trap!

After a couple issues of setting things up, this issue really moved things forward.  Not only does Batman get down to some serious detective work, he also is able to make an overture to Damian in an attempt to start closing the rift between them.  Though brief, this is a satisfying moment between father and son.

The issue also strikes a balance between action and plot with Batman fighting Ducard, Kyodai Ken and the shape shifting monster while also allowing Batman to figure out that it is the people that help made him are being targeted.  Not only does the perpetrator know that Bruce Wayne is Batman, but that Leslie Thompkins, Alfred Pennyworth, Henri Ducard and Sensei Kirigi were responsible for assisting the young orphan into becoming the Batman.  This is a clever lead up to the historic Detective Comics #1000 which will also celebrate Batman’s 80th anniversary.  So before celebrating the Bat, Tomasi and company acknowledge those that made the Bat.

It’s also a nice bit of connecting the dots by including Ducard who’s initial appearance in Detective Comics #599 ran through issue #600, which celebrated Batman’s 50th anniversary.

The opening issue in this issue had a similar theme to Tom King’s Batman #61, in revisiting Bruce’s parents’ death as well as  this issue’s opening “questioning” of Arkham’s inmates which was not dissimilar to what King did in Batman #59 when the Dark Knight brutalized the seemingly catatonic Bane.  The arc improves greatly after it shrugs off these similarities and gets down to the detective work.

This issue gets Tomasi’s run headed in the right direction with some solid detective work which filled out the plot, putting Batman in motion to find his adversary.  Now that it’s clear to the Batman the purpose of these attacks, it is also clear to the reader that it is a celebration of those who have helped developed the Dark Knight into the man he is.  It proves to be interesting as these characters are explored in the run up to Detective Comics #1000.