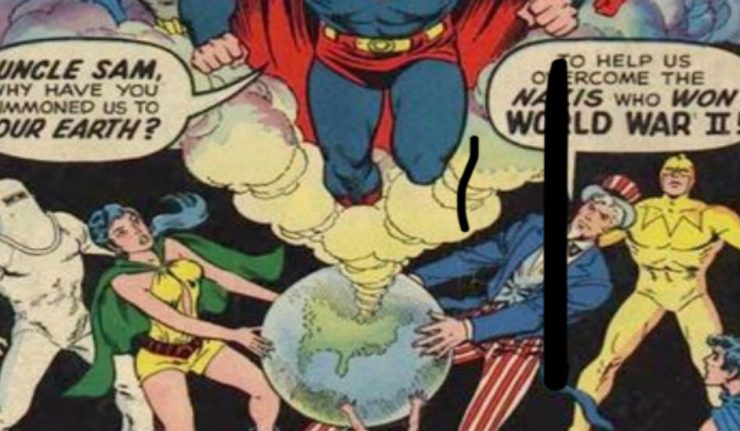 Last month, DC launched a new Freedom Fighters,12-issue limited series, written by Robert Venditti with art by Eddy Barrows, Eber Ferreria, and Adriano Lucas. It reintroduces the team in its classic status quo- the last heroes in a world in which the Nazis won World War II. A horrific world, yet these heroes fight the good fight for freedom against the tyranny of the Third Reich which the Allies defeated in the real world. These characters weren’t originally conceived as such.  However, their beginnings date back to the very origins of comic books themselves.

The first comic books were reprints of newspaper comic strips, and as the demand increased, companies began putting out new material, hence DC’s first two titles, New Comics and New Fun Comics. The “new” was an indication that these were all original characters and stories.

As more and more magazine companies were interested in putting out comics, the idea of comic book packaging houses was formed. One of the most prolific and most famous was run by Jerry Iger and Will Eisner. You may have heard of that Eisner guy, he’s one of the most important creators in the history of the medium, and there’s some industry award named for him as well. Iger was the business end and Eisner was the creative. And boy was he creative. Not only did he hire writers and artists to produce comics for publishers like Victor Fox and Everett “Busy” Arnold, but he wrote, drew and created many of the features. While Eisner would later go on to create his most important character, The Spirit, he is also responsible for Wonderman, Sheena, Doll Man, Uncle Sam, the Blackhawks and many others.

“Busy” Arnold was the head of what would become Quality Comics, and with Eisner behind the creative end, there was no doubt that these would be quality in content as well as name. Jack Cole, Lou Fine and Reed Crandall are three of the best artist ever in the medium and they got their start at the Eisner and Iger shop, and worked on numerous Quality Comics characters.

By the end of the 1940’s, the comic book industry was facing some difficult times. The end of World War II and the onset of the Cold War, created a need for different kinds of stories. What had been a sure bet during the War, the super-hero, or mystery man, as he was usually known then, gave way to more War, Crime, Western and Romance comics. Many companies folded, including Quality. Even Fawcett, publisher of the highest selling character of all time, Captain Marvel, gave up and folded, ceding the lawsuit over their most popular character to DC Comics’ lawyers. But, that’s another story….

By the mid-Fifties, Quality Comics went out of business and their characters went into comic book limbo…at least some of them did…. DC immediately bought the rights to Quality’s catalog and kept titles like Blackhawk and G.I.Combat in publication. While G.I. Combat would remain uninterrupted until its cancellation in 1987, Blackhawk had a few breaks in its run until it succumbed permanently in 1984, posting  a few subsequent revivals.

One of the hallmarks of the Justice League of America from 1963 through 1984 was the annual team-up with the Justice Society of America each Summer. In Justice League of America #107, Len Wein and Dick Dillin revived some of the Quality Comics characters in “Crisis On Earth-X.” By this time in DC’s history, alternate Earth’s were a popular and interesting way of presenting alternate versions of characters as well as incorporating historical accuracy to the comics. This crossover featured members of the JLA (Earth-One) and members of the JSA (Earth-Two) teaming up to assist these limboed characters from Quality Comics in their fight against the Nazis. To the JLA, World War II was history, to the JSA, World War II was the war they’d won, to the Quality characters, World War II was the war they were still fighting. In our world, the Quality characters were created just before World War II, and in the DC Multiverse, they were still stuck there. After being re-introduced in this crossover, they were granted their own series a few years later, but it was quite a departure for the team.

After their Multiversal crossover, they commenced in a series of their own in 1976. After having finally beaten the Nazis on their native Earth-X, they crossed over to the main DC Earth, Earth-One and prepared themselves for a life of the heroic. However, due to the machinations of the villain, the Silver Ghost, they end up as public enemies number one and spent their series trying to clear their name. This series long deserves a collected edition including the JLA introductory issues.

The next significant appearance of the Freedom Fighters is in All-Star Squadron. In 1981, Roy Thomas launched a series set during World War II and masterfully attempted to match up real world events with comic book publication dates. Thomas included all DC books in his effort and also decided to bring in the characters from Quality Comics. In Thomas’ stories, the Quality characters originated on Earth-Two and eventually migrated to Earth-X. This gave an added back story, while at the same time allowed Thomas to use them for a while before they changed Earths. While setting up the history of Earth-X that had already been revealed, it was all changed with Crisis on Infinite Earths. Published from 1985-1986, this series redesigned the DC Universe so that the main history from the Golden Age to the present all took place on one Earth. While this required a lot of changes, for a team like the Freedom Fighters whose history was reliant on the multiple Earths scenario, it created a lot of questions.

Post-Crisis, the characters who traditionally made up the team were presented in a few solo series. Most notably, the most recent incarnations of Phantom Lady, the Ray and Black Condor all received some exposure outside the team concept. The Ray and Black Condor had their own series, and Phantom Lady appeared in Action Comics Weekly for a bit. DC clearly knew it had some great characters, but were never able to make them stick.

Even Plastic Man, a Quality Comics character who was never a true member of the Freedom Fighters struggled in his DC incarnations to make an impact. Having been created by Jack Cole, he was not only fondly remembered by fans, but also comics’ professionals who desperately wanted to see the character again. Along with Captain Marvel, he is one of the two non-DC or Marvel characters that have a name and visual recognition amongst the general populace even to this day.

During the ‘90’s, Sandra Knight, Phantom Lady, made a few appearances in James Robinson’s excellent Starman series. Sandra kept an historical presence and eventually ended up in the modern world in Birds of Prey during Gail Simone’s run.

During the Golden Age, these characters were the product of some unparalleled creators. Without these creators and an audience hungry for product in the dawn of comics, it seems these characters need a unique status quo. It seems that the fight against the Nazis is just that status quo. It provides something different that no other comic offers. While it may be easy to claim that the Nazis are clichéd, it’s just as easy to paint them as classic villains that provide analogues to contemporary socio-political issues. It seems that this is what these characters need to thrive, because it’ clear we aren’t going back to a pre-War sensibility. Although, it may just be the right take that is needed to make any one of these characters thrive. 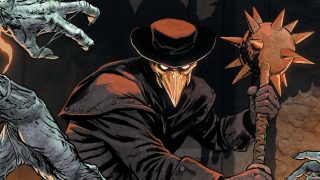 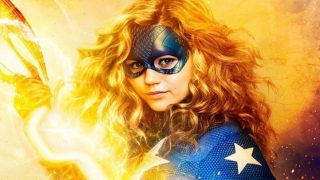