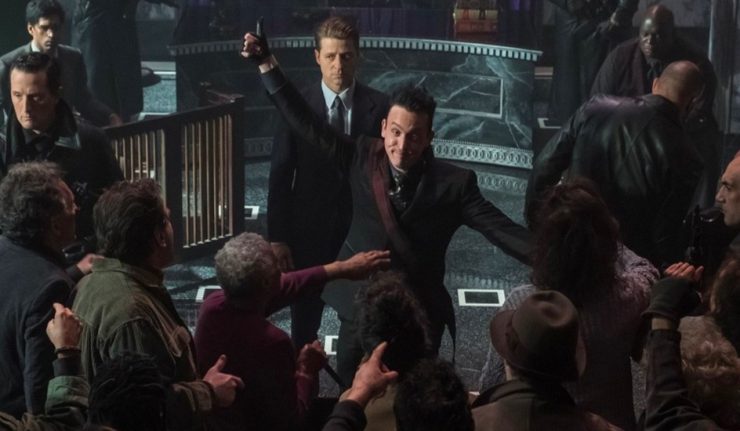 Gordon and Penguin are forced to work together and alliances are shaken when Lucius, Nygma and Barbara all have different ideas of the culprit behind recent events at Haven. Meanwhile, Selina continues her quest for revenge against Jeremiah.

The twist about who destroyed Haven is great. It’s possible I tricked myself because I was convinced that this would be our introduction to Bane. But I still felt the reveal was interesting and unexpected.

I like that Riddler is more involved with the main story in this. I loved the weird connection he had with Lucius back in season three but it never went anywhere after that episode, so it was nice to see the two of them interact a lot and solve a mystery together.

One of the more tedious aspects of the season is Gordon constantly giving speeches about hope. I get it but they’ve been his only real character trait so far this year. This episode turns that on his head; his speeches are just empty words to people. I like that; Gordon is trying to be this inspirational hero but is constantly being challenged by his own rage. That’s a consistent idea throughout the show and I liked seeing it show up again.

The fate of Jeremiah was underwhelming. Death is used quite a bit on this show to get out of a writing corner. They don’t want Selina on a vengeance quest the entire season so she gets her vengeance early and in a way that is somewhat anti-climatic. This leads to the point because we know that Cameron Monaghan will still be a part of the season after that but that doesn’t help. There isn’t a shock to Jeremiah’s death because no death could possibly shock on this show and we’ve seen this actor die twice already.

This is a solid episode. Haven’s destruction raises the stakes; it provides challenges among the characters and the city itself. The one symbol of hope they had is now a pile of rubble. Selina’s revenge isn’t that interesting other than a moment where she doesn’t even let Jeremiah speak; that was fun. Overall, this was fun.