Synopsis: While Oliver and Felicity deal with the revelation of the new Green Arrow’s identity, Rene assists Emiko in her vendetta and Diggle crosses a line at A.R.G.U.S. with Lyra to secure Diaz’s help. In the future, Zoe approaches her father who is no longer the man he used to be. 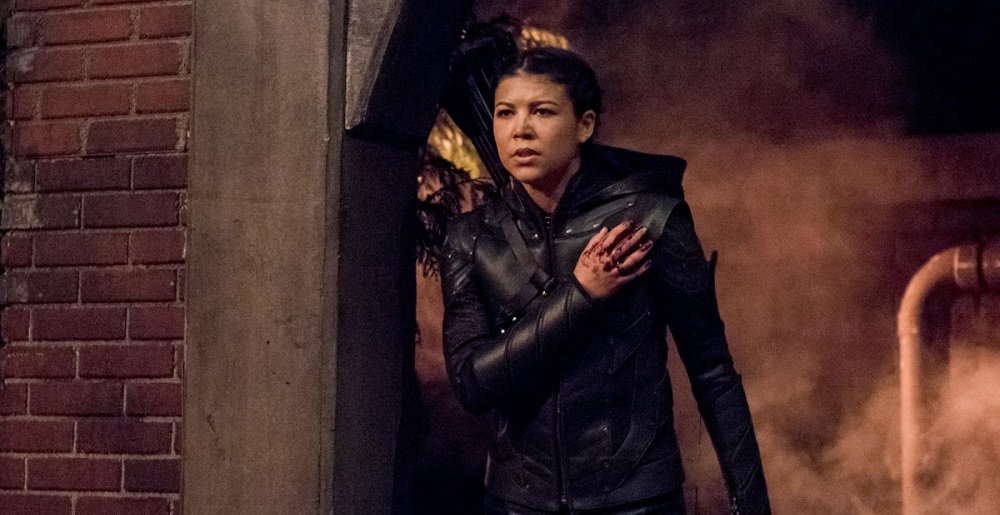 This episode really tapped into the emotional dysfunction of season one with regards to the Queen family. The writers were right in making Emiko’s methods mirror those of The Hood in season one, from her own list to her loner methods to even her own internal monologue. I’ve always felt that the latter should have been retained beyond season one’s first few episodes; acquiring allies should not have eliminated the viewer’s need to see the internal workings of Oliver’s rationale.

This perfectly contradicts her claims that she is nothing like Oliver. Making this an Emiko-centered episode works in that her character arc needed a spotlight as opposed to being a Green Arrow wannabe. Keeping Oliver himself on the sidelines yet still active in the investigation was a smart move. While I question the full removal of the full facial mask, seeing Sea’s face and her emote in her confrontations with both Rene and her target allows the viewer to connect with her more. Another parallel established was the formation of her own trinity with Rene as her Diggle and Curtis as her male version of Felicity, right down to the similar pattern of speech. Her backstory of how her mother was murdered and masked as an accidental fire is properly layered by making it a continued journey as opposed to a self-contained resolution. Without a target she has no reason to be Green Arrow, and Rene no longer has an outlet for his vigilante persona. 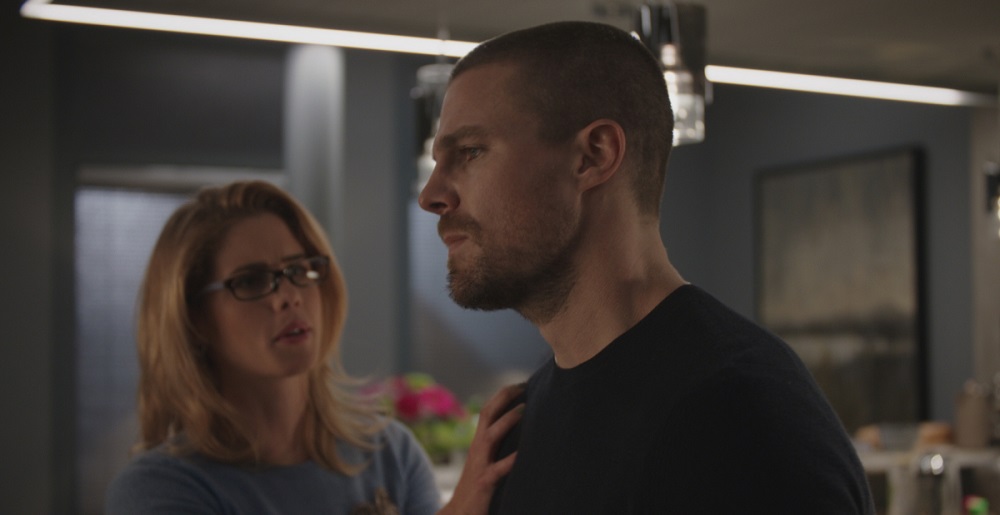 Stephen and Emily’s characters seem to be back on track with regards to their marriage, and that is good considering the emotional rollercoaster that blood sample carries. For fans, it was a reminder of the sins that Robert Queen entrusted Oliver with atoning for, and the sins Moira herself committed for the sake of maintaining the façade of a perfect family. Stephen’s conveyance of Oliver’s conflicted emotions over his father’s abandonment of his second family, and his mother’s denial of financial support nor their very existence, is perfectly restrained yet felt. Just when Oliver had made peace with the people that his parents were, out of the blue comes the existence of another half-sibling who was denied the opportunities he and Thea were blessed with. In effect, both Robert and Moira had committed the same crime of neglect towards Emiko and her mother to protect their image. What works in those scenes was Felicity reminding Oliver that he, himself, is close to committing the same offence through his reluctance to reach out.

With Willa Holland due to make an appearance later in the season, it’s the perfect time to see how she, herself, deals with this revelation. While brief and with few words, the closing scene at their father’s grave is strongly felt. The significance of that grave is that we have not seen Oliver visit that grave or converse with his father since the second episode of season one. Longtime fans remember how he made a promise at his grave to right his wrongs, and now we have another one of those wrongs standing in front of him: The woman who was abandoned by their father is now face-to-face with the brother favoured over her and her mother. Alternatively, the man who had just found out he had another sister in the world that his father had unjustifiably cast aside now faces the insurmountable task of atonement for another of his family’s sins. I really look forward to seeing an extensive exchange in the next episode. 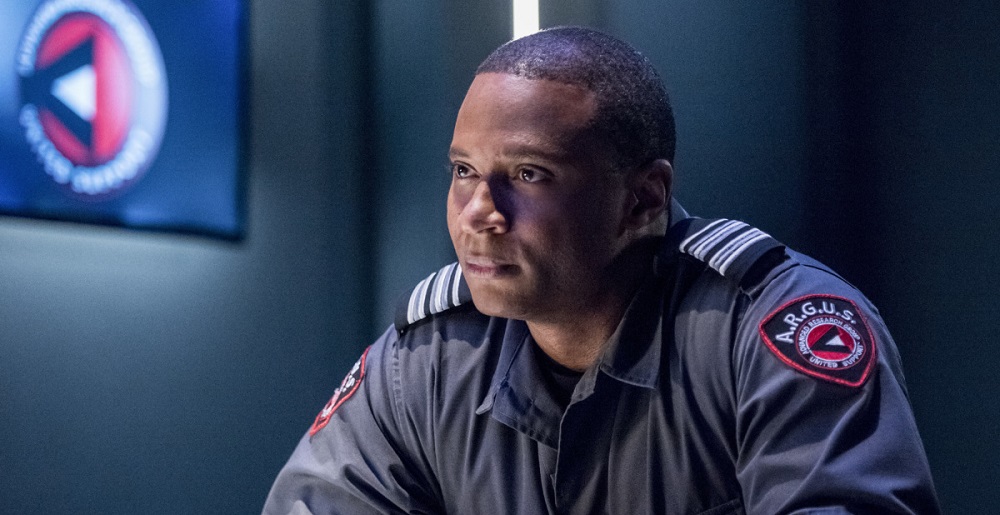 The A.R.G.U.S. subplot involving what to do with Diaz is also interesting because it shows how far the writers are taking Diggle’s desperation. He had been a part of one of Amanda Waller’s “Suicide Squad” missions and was just as vocal about his disgust at the entire project. And now he stands a hypocrite by pulling it out of a hat at the last minute to justify A.R.G.U.S.’s detainment of a man who should be left to rot in Slabside. What’s worse is that he had pulled Lyla, the director of this organization, into it when she was the one who pulled the plug on it. The irony is not lost in her crack about becoming the next Waller. Thanks to John she’s now forced into the position and pushed very close to that line. What makes it more fascinating is that Diaz has now sworn vengeance on Lyla for the bomb implanted in his neck against his will, another mark on Diggle’s record. Audrie’s masked protest in her voice is evident in her facial expressions; her husband has now put her in the crosshairs with that last minute cover and there’s nothing she can do about it.

The writers are creative by giving Diaz an active reason for still being included in this season and utilized beyond the jailed Hannibal Lecter motif. (Note: Since there is another Suicide Squad film in the wings, I noticed them use “Ghost Initiative” rather than “Task Force X” in reference to the team to keep them distinct.) Again, making this a continuous hot-button issue between husband and wife is more grounded and the best way to keep their subplot this season interesting. 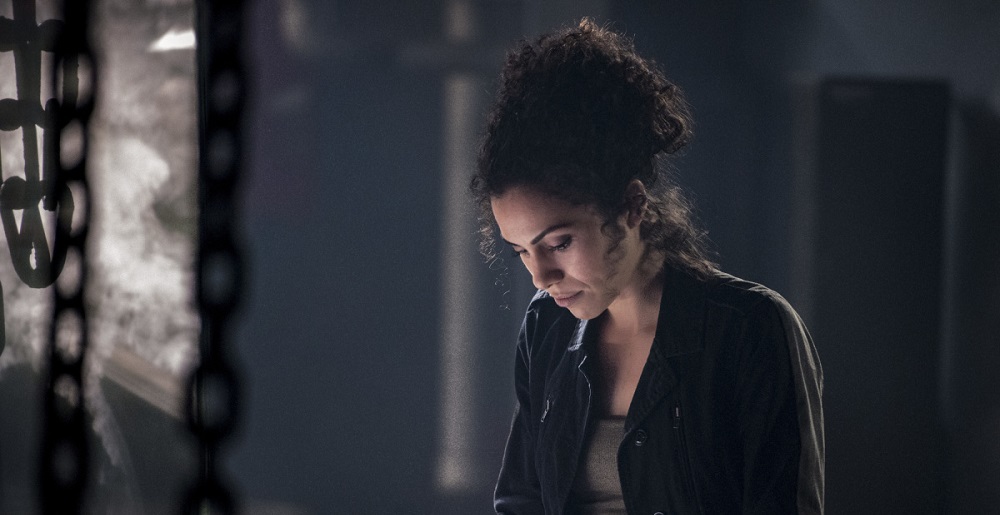 The Flash forward sequences this week focused on what has become of Rene. If this were a WWE event you would hear the chants “You sold out! You sold out!” From the full head of hair to the business suits to being a separatist mayor, Mayor Rene Ramirez is a far cry from the gun-toting member of Team Arrow 2.0. I feel it’s necessary to give Andrea Sixtos’s take on his adult daughter depth by creating friction between what was once a close-knit family.  Even before it’s revealed he’s gone dirty, that exchange with future Dinah is also a huge contradiction to the chemistry in the present day. From being the guy urging the reformation of Team Arrow to the man threatening Dinah’s arrest if she is seen in the Glades or near his daughter again, Rick’s take on the former Wild Dog is very diverse. It’s only in his reaction to the news that Felicity Smoak may have been killed, and his masked disgust that his business partner may have been involved, shows the old Rene is still buried in there somewhere. Extending on this, their very plan is an inversion of Malcolm Merlyn’s plan in season one; this new undertaking targets the devastation of Star City whereas the original was once the Glades. The fact that Rene is complacent with such an agenda is a further indicator of how far he’s truly fallen and will require something insurmountable for him to realize this. Could the writers, therefore, be adding more back story to Future Zoe to lay the foundation for a potential tragedy waiting in the wings? Time will tell. The future sequences have now become more interesting and now the question is what has happened to Diggle and Lyla and A.R.G.U.S.?

The only complaint I have is where Emiko could have acquired her skills. If her mother had been killed a year before, then she would have had to learn all of the archery and martial arts in that short timespan. Her moves are too crisp to be those of a novice, and it took Oliver five years to reach the level of mastery that Emiko seems to possess. I’m sorry, but the adage that girls mature faster than boys does not apply here, so please don’t think this is sexist. There is a major hole in the plot as to where Emiko could have acquired such similar skills in a short amount of time. Again, why did she abandon the full facial mask? Was it because the writers felt she looked too much like Poseidon? I sincerely hope that she makes note of why she ditched it in favour of the domino mask. 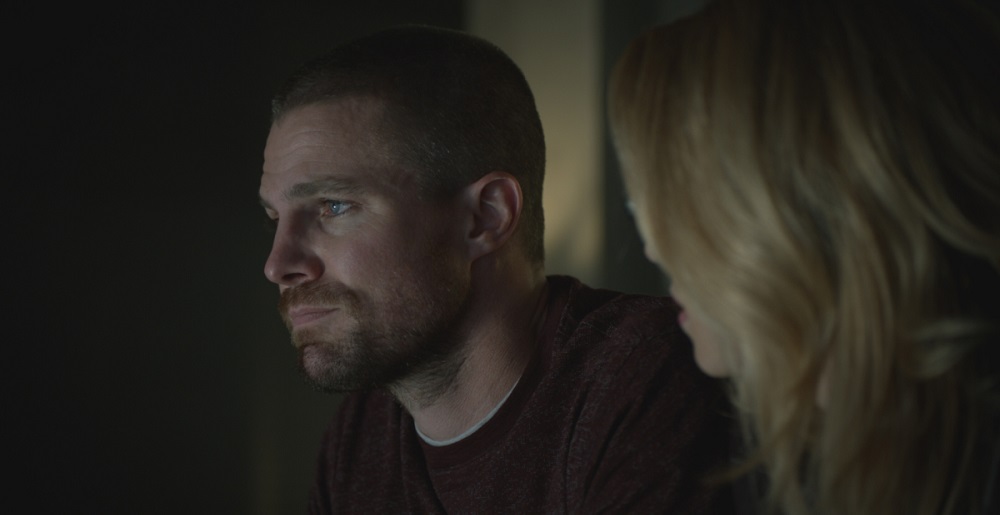 I’ve given this a solid 5 out of 5. In spite of the aesthetic flaws, this episode was a strong midseason premiere that hooks you in. Stephen’s and Emily’s performances hold you, and that says a lot when they are not even actively involved in the action. Emiko Queen’s story is very engaging and made more interesting now that Oliver now knows his connection to her. The misdirection from the initial suspicion that we were dealing with a time-travelling William was perfect. The family drama between Zoe and Rene adds more layers to these sequences and hooks you in. A.R.G.U.S. and the proposed Suicide Squad 2.0 is also intriguing and offers a parallel to the now-stable marriage between Oliver and Felicity. Overall, great job you guys and we can’t wait for next Monday!