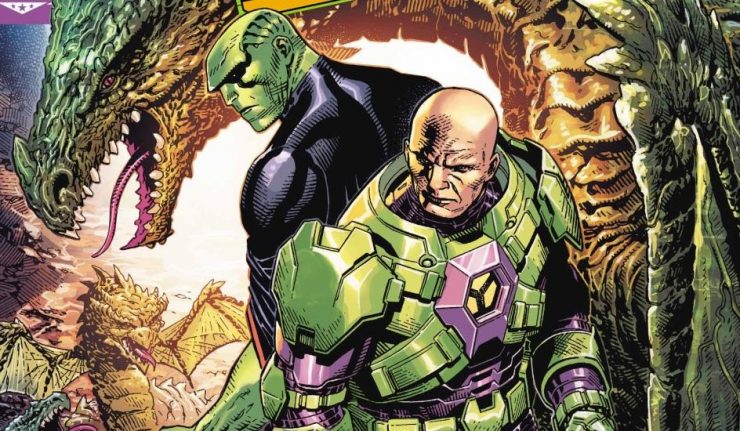 After the disastrous events of the Justice League Annual, Martian Manhunter decides to take matters into his own hands and negotiate a peace with Legion of Doom leader Lex Luthor. Traveling to a distant moon, the two enemies face their intertwined pasts in a showdown for the fate of the Multiverse. However, before either of them can lay claim to the power of the Source Wall once and for all, an unexpected threat forces them to unite…or risk death at the ends of the cosmos.

Issues of Justice League frequently has a large cast of characters, but this issue features a one-on-one meeting between the Martian Manhunter and Lex Luthor. With the Multiverse facing imminent destruction, J’onn has invited Lex to Mars to impart a previously unrevealed secret from the past.

This secret is a memory from J’onn’s past, which reveals that as a child, J’onn had been captured by the Legionnaire’s Club. While a prisoner of this group, J’onn had met and befriended a child named “Albie.” As J’onn tells the story to Lex, he eventually reveals that “Albie” was in fact a young Lex Luthor.

The memory of their brief friendship had been erased from Lex’s mind, but J’onn manages to restore his memory from a more innocent time before he had started down the path of villainy. This adds some depth to the character of Luthor. He may have given himself over to evil, but somewhere inside him is the remnant of that young boy who reached out and befriended a scared and lonely Martian child.

We see that Lex is affected by the reawakening of this memory, but will it be enough to divert Lex from his plan to reawaken Perpetua? Perhaps not, but it does seem to have ignited an internal conflict within him.

As well written as the story is, I have some reservations about stories that retcon new elements into the backstory of characters. Doing so can often lead to overly convoluted histories and hurry the need for a Crisis or Zero Hour to clean the continuity up. At least this retcon isn’t as badly managed as the time that Lana Lang was revealed to be a sleeper Manhunter agent.

After the major cosmic events of the past several issues, a character-driven interlude is a welcome breather before diving back into the thick of the high-stakes epic that Snyder and Tynion have been delivering. It also adds an intriguing and unexpected dimension to the character of Lex Luthor. This storyline is shaking the DCU to its core, and promises to take things even further.