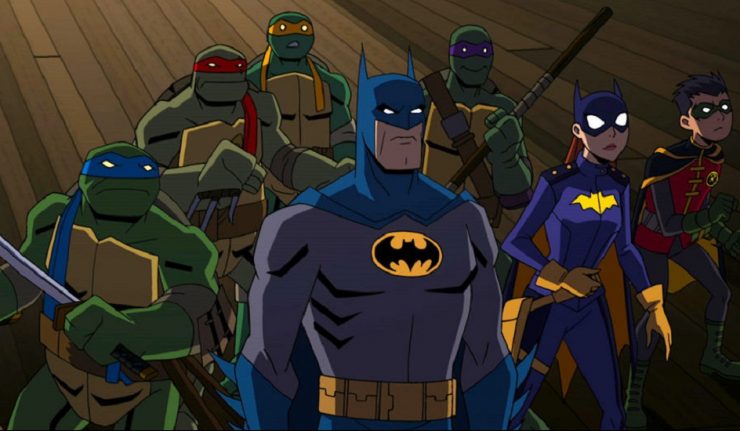 Batman will team up with the shelled vigilantes later this spring.

In 2015 the Dark Knight teamed with the turtle power team on the pages of IDW and DC comics crossover to critical and commercial success. Now the team up will be heading to the animated screen with a star-studded, talented voice cast.

“This spring, Warner Bros. Animation and Warner Home Entertainment are teaming up with DC Entertainment and Nickelodeon for Batman vs. Teenage Mutant Ninja Turtles, an all-new animated movie that unites everyone’s favorite turtles with the Caped Crusader for the first time outside of the comics page. Based on the Batman/Teenage Mutant Ninja Turtles comics miniseries by James Tynion IV and Freddie Williams II, the film will see the turtles meeting Batman and feature our heroes teaming up to face Batman’s deadly rogues gallery.”

It’s unclear how Nicklelodeon will factor into the deal as the film is only slated to go to 4k and Bluray for a home release but that may change as time goes on.

The film’s voice cast features Troy Baker (The Last of Us, Batman: Arkham Origins) as both Batman and the Joker (making him the first actor ever to take on both roles in one project), Darren Criss (the Emmy-winning star of The Assassination of Gianni Versace: American Crime Story) as Raphael, Kyle Mooney (Saturday Night Live) as Michelangelo, Baron Vaughn (Grace and Frankie) as Donatello, Eric Bauza (The Woody Woodpecker Show) as Leonardo, Rachel Bloom (Crazy Ex-Girlfriend) as Batgirl, Tom Kenny (SpongeBob SquarePants) as the Penguin, John DiMaggio (Adventure Time) as Mr. Freeze, Tara Strong (The Powerpuff Girls) as both Harley Quinn and Poison Ivy, Carlos Alazraqui (Reno 911!) as Bane, and Cas Anvar (The Expanse) as Ra’s al Ghul.

Are you excited for the crew to meet the Bat? What other crossovers would you like to see? Let us know down in the comments.