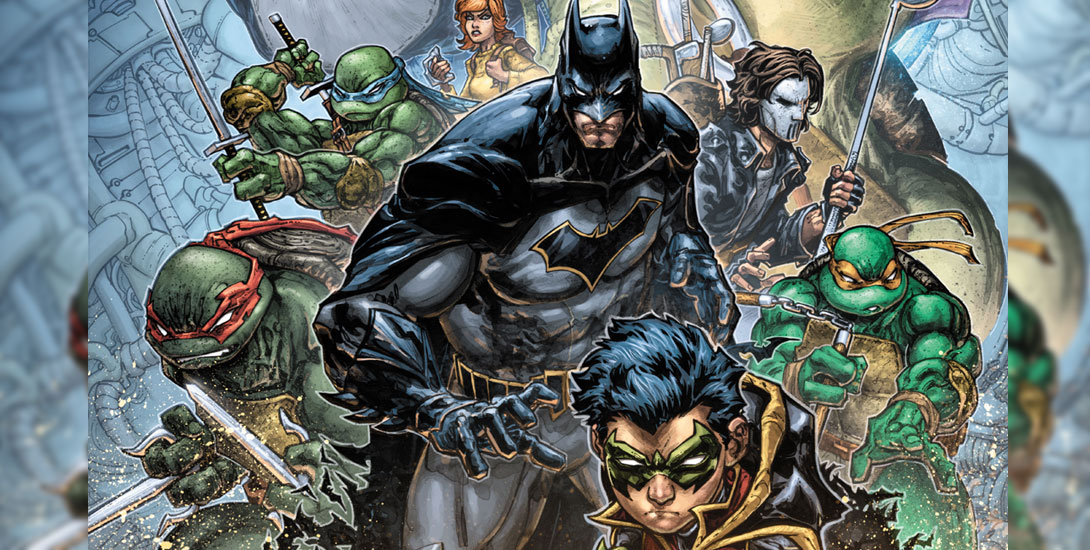 The project comes amid DC’s celebration of Batman’s 80th anniversary — and 35 years after the first Teenage Mutant Ninja Turtles comics hit the stands. James Tynion IV had this to say.

“I still remember the e-mail asking me if I wanted to write the first Batman/Teenage Mutant Ninja Turtles crossover,” My brain couldn’t even process what I was reading for a few seconds, and I started having a panic attack about fitting it into my work schedule. Then, finally, I pictured Michelangelo’s reaction to seeing the T. Rex in the Batcave for the first time and started laughing out loud.”

“When I got the call asking if I would be interested in doing some covers for a Batman/TMNTcrossover,” added Teenage Mutant Ninja Turtles co-creator Kevin Eastman, “the ten-year-old Batman fan got up and ran around the room screaming at the top of his lungs with excitement…then the fifty-year-old life-long Batman fan did the same thing!”

Tynion IV teams up again with Freddie E. Williams II and colorist Jeremy Colwell for this final chapter of the trilogy . Eastman will illustrate variant covers for the series and contribute interior artwork at a pivotal point in the new run.

“The story for volume three is a blast, and I am having the time of my life illustrating it,” said Williams II. “And lucky for me, I’m not alone in this grand task. I’m having a huge and exciting personal crossover of my own with one of my all-time heroes and favorite artists, Kevin Eastman! Say what? Yup, you heard that right! We’ve got something so fun and exciting planned! I’m geeking out about it every day, and I think all of you will, too!”

If all that wasn’t enough the villain in the final chapter will be none other other than TMNT big bad Krang! The fan favorite team-up should be exactly what readers want in a final chapter! The first issue hits stands May 1st!