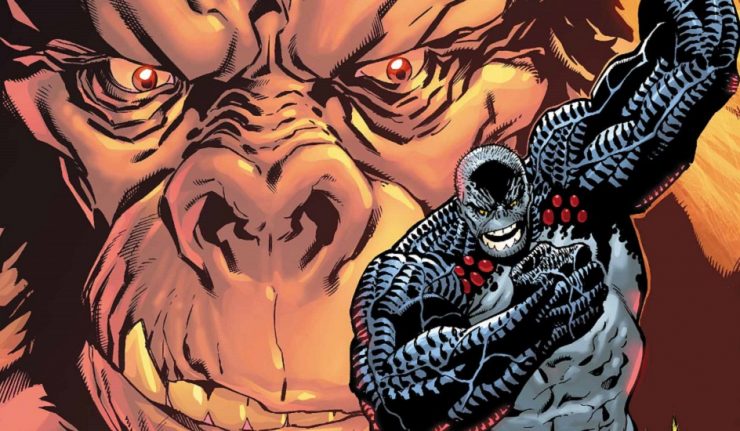 Stranded on an island of monsters! Following his run-in with the Justice League, Damage was dropped in a remote location in the middle of the ocean, a lost land of some of the most dangerous creatures to ever roam the Earth. And now Damage is one of them— but only for an hour a day. The rest of the time, Ethan Avery is an ordinary man, and he is going to have to survive by his wits if he ever wants to get back to the mainland alive. That is, if there isn’t more to this island than is obvious on the surface. Is there a more sinister reason that all these monsters have been stranded together?

If you like battles, this is your issue.  Every battle frame of the comic is huge and reminiscent of a 70’s homage to Godzilla versus King Kong.  And you’re left scratching your head as to why the Justice League maintains such a place to deposit creatures.

I’m not so sure that enough Damage has been done, but I think “Damage Is Done!”.  This issue jumps the shark!  This was a great premise, but Damage has an hour to do anything he wants or craves to do.  It’s like the old question “How much money would it take for you to climb into the ring with Mike Tyson for three minutes?”  I hope that Damage is being sewn up in this story line.  It seems appropriate that he is in a dumping ground with Congo Bill (don’t we already have a Beast Boy who can transform into animals or Jana who can take the form of any animal?).  I hope Congo Bill and Ethan stay on this island.  Perhaps the JLA can grab him when they need a one hour dumping ground.  Heaven forbid if Waller of the Suicide Squad needs a quick mission.

The art is like the Dan Jurgen’s run on Death of Superman.  But the writing is not superlative at this point as I think enough Damage has been done.  As they say in social media….”I’m just going to leave this right here….”  I hope the writers do the same with Damage.