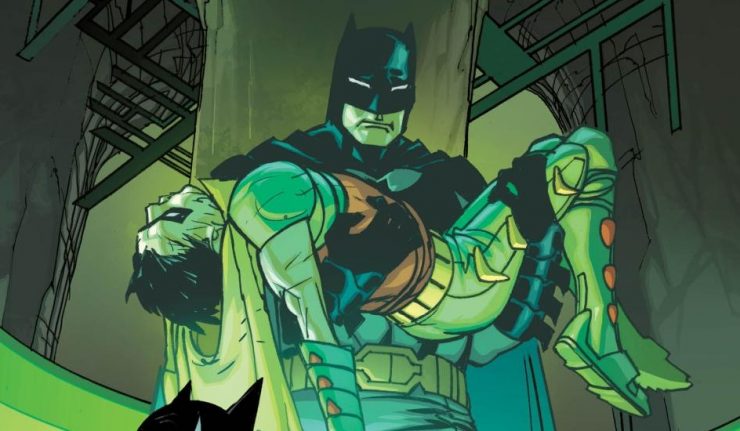 Summary
Joker is prepared to deliver his fatal punchline as everything — and the kitchen sink, too — hits the fan for Batman and Robin. Even with Dick Grayson’s help, the Dynamic Duo of tomorrow and Bruce Wayne may not stand a chance. Will Joker turn Terry’s brother into the new Jason Todd? Is now a good time for Terry and Bruce to clash? And why are Neo-Gothamites cheering on the Clown Prince? Will anyone survive “The Final Joke”?

Positives
Ever since it was revealed that Joker was still alive in the Batman Beyond universe, we all knew it was inevitable that an epic showdown was coming. The question was, which Batman would be the one facing Joker in this final confrontation – Bruce Wayne or Terry McGinnis?

Well, it turns out that despite Terry being the titular character, that it was Bruce. Of course it was Bruce. The Joker was Bruce’s arch nemesis throughout his entire life as Batman. Despite Bruce no longer being Batman, and being too old to engage in superheroics, it was his and Joker’s destiny to continue to fight until at least one of them was dead.

I also found it rather striking that the fight comes down to Bruce holding a gun on the Joker, with the Joker goading Bruce to shoot by reminding Bruce of what he had done to Jason Todd and Barbara Gordon. Bruce, who absolutely hates guns, finds himself holding one and considering breaking his number one rule about taking a human life.

And then the Joker has a heart attack and dies. At first I thought this was a copout – that Jurgens was chickening out from having Bruce make this decision. And then I realized that this leaves an agonizing difficult thread hanging for Bruce. Bruce has to live out the rest of his days wondering if he would have killed and also agonize over whether he should have done so.

There is also the question if this is the end for Joker, or if he will eventually return. After all, characters return all the time. However, this is not the main DCU, but a possible future timeline, meaning that it could well be the last Joker story ever in the Batman Beyond universe, which gives the death a bit more weight than if it had happened in a main DCU title.

Negatives
It is apparent that something really dark has happened to Dick to sour him on his former superhero roles and Batman’s crusade against crime. Maybe it’s the culmination of several events, but I get the feeling that something specific happened and I really want to know what that is. What could make Dick Grayson to react to the implication that Joker had killed Matt to utter the words, “If he did, I will kill him with my bare hands.” Oddly, the thought of Dick Grayson committing murder sounds even more uncharacteristic than Bruce doing so. Where Bruce may struggle to keep from breaking his vow to not take a life, it’s just not in Dick’s character to do so.

I am also disappointed that Dick’s daughter Elainna hasn’t played a bigger role in the story so far. Her only real part in this issue was getting shot and injured by Joker. This is sure to get Dick even angrier with Bruce, but if that’s her only contribution to story, then it might have been better not to have her in the story. We don’t really need another female character whose death or injury only serves as a backdrop for the story about the male characters.

I would like to see the character of Elainna fleshed out. Perhaps she might join the Bat-Family, whether as a superheroine or in a supporting role. Maybe some wholly new identity rather than a Beyond version of a present-day character for a change.

While Matt happily survives his encounter with the Joker, I wonder if this is enough to convince Terry or Bruce that Robin shouldn’t. I hope that Matt is allowed to continue in the role, and that Terry and Bruce (and perhaps Dick) commit to training Matt to give him a better chance to survive and thrive in the role.

Verdict
Overall, this was a brilliant follow-up to The Killing Joke and A Death In The Family, and a fitting conclusion to the never-ending battle between Batman and the Joker. It certainly was overdue for Dick to make an appearance. Hopefully, he and Elainna will at least make occasional appearances in the future. I also can’t wait to see how this encounter will affect Bruce’s relationships with the rest of the Bat-Family.