Pearl is a wanted woman.  The Endo Twins, Mr. Miike, rival Yakuza, and he maybe, kinda, I-don’t-want-to-commit boyfriend Rick Araki all want a piece of Pearl Tanaka as she copes with new information about her mother obtained from her father.  All want to see Pearl face the consequences of her actions, but now Pearl is going to have to go up against something she’s never faced before: the Law.  Special agent Yuko Masako is on the case! 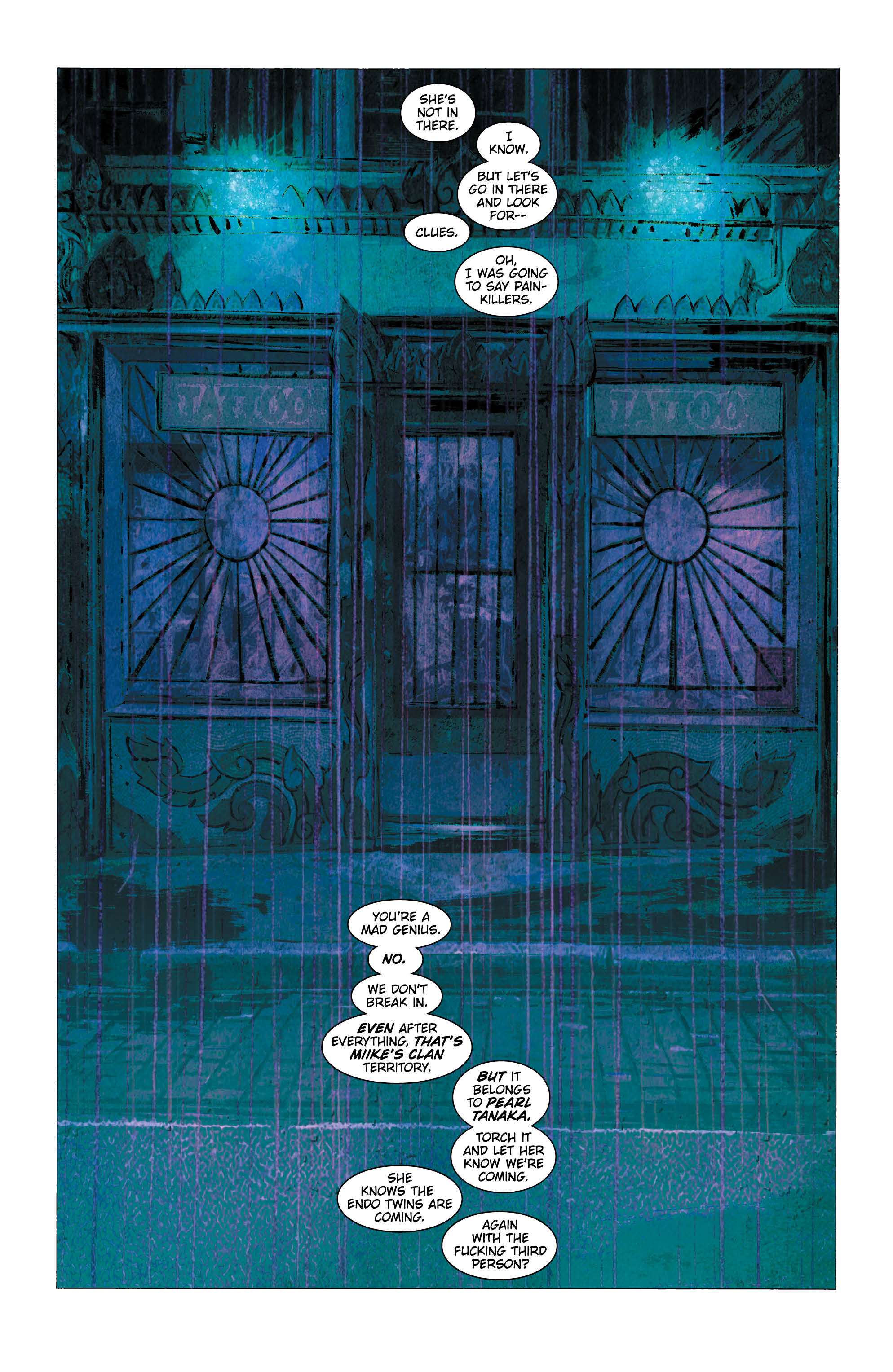 Crime narratives are not new to comics.  From the beginning with Crime Does Not Pay all the way to Brubaker’s Criminal, Collins’s Road to Perdition, and Wagner’s A History of Violence, complex criminal organizations with murky agendas are a staple in comics.  They use violent realism to evoke complex emotions and raise intricate questions that few other genres can.  Do people who have done unspeakable things deserve a happy life?  Can a criminal organization also do good for the world.  How can good and bad be so black and white when the world is in shades of gray? Pearl explores these questions and more from the unique perspective of somebody who did not choose this life.  Somebody whose life is based on a lie.  Pearl Tanaka.

Pearl has shed an interesting light on the criminal underbelly of San Francisco and the captivating beauty of tattoos.  The first issue introduced us to Pearl and her world of tattoos and the Yakuza.  The second weaved the importance of tattoo as an art form with Pearl’s past and history with her parents.  Issues three and four further defined the supporting cast as the Endo Twins, Mr. Miike, Rick Araki, and Kimmy.  Issues five and six, however, defined the arc by expressing that Pearl herself, the human being, is the purest and rawest form of art there can be.  Despite the prose, watercolor, tattoos, and other forms of art used to portray her story, nothing can capture a person’s beauty as well as the real thing.  Even if that person is a fictional character.

Each issue adds a new work of art to Pearl’s tapestry and a new dimension to Pearl’s story.  It may be unusual to think that groundbreaking visual storytelling is happening in a book like Pearl, but Bendis and Gaydos are combining intentional paneling and breathtaking watercolors with unique and creative forms of lettering and other visual media such as graphic design, tattooing, and more.

Brian Michael Bendis, Michael Gaydos, Dave Sharpe, and Curtis King Jr. have made Pearl a woman on the run.  They may know where she is headed, but us readers are just along for the ride, and what a magical ride it is.  The issue begins in a very vulnerable place: Pearl’s psyche.  She has finally come to terms with her feelings for Rick Araki and is relatively okay with it.  Pearl #7 revisits many of the spectacular visual storytelling techniques present in the first arc and builds upon them.  We begin with a close up on the same spider tattoo we saw in issue #1.   The first arc was about tattooing being a tool of expression, power, identity, and talent.  This issue focuses less on the tool and more on the canvas, celebrating the human body and the person in all their awesome beauty.  These pages are some of the most vulnerable comic storytelling in recent memory as we witness this extremely intimate moment between Rick and Pearl.  Gaydos is the key to this scene’s success with how well he is able to zoom out from a particular image or remarkably capture the light shining through the window.  In many ways, Pearl can offer us a slice of human existence from the raw and beautiful to the incredibly sadistic and fucked up.

Gaydos continues to stand out as the driving presence behind this title.  Each issue adds a new visual component to the wide array of tools being used in this title. In Pearl #7 its the plethora of double page spreads he includes towards the later half of the title.   We didn’t see very many int he first arc, but in this issue, Gaydos is able to let it all out and physically open up Pearl’s world.  As she leave San Francisco and enters Portland we gets these beautiful, broad, and lavish landscapes of the two cities and their different people, vibes, aesthetics, and maybe tattoo styles.  Its a striking contrast to the expert use of the 9-panel grid a bit earlier in the issue.  First Yuko sees Kimmy while investigating Pearl and starts asking a lot of question.  The 9-panel grid appears as soon as Yuko starts to close in on a lead, the panels physically closing in on Kimmy. Later, Pearl is waiting for Kimmy when a random woman walks up to her to ask if something is racist or not.  Pearl reveals her tattoo and the woman backs off.  The top three panels where Pearl is waiting for Kimmy form a single image, but as the woman gets in Pearl’s face, the panels close in on her and create a more constricted feeling.  The woman isn’t just in Pearl’s face, she’s in our faces.

The color palette remains an essential part of the story as well.  Pearl is often bathed in a pale blue light while Kimmy dons her rose colored classes.  As the two meet up, the overtones combine and the night sky as they leave San Francisco is a beautiful shade of purple.  Its easy to make a crime drama like this really dark and gritty as a reflection of the tone, but this book takes a step in the opposite direction and should be applauded for that. 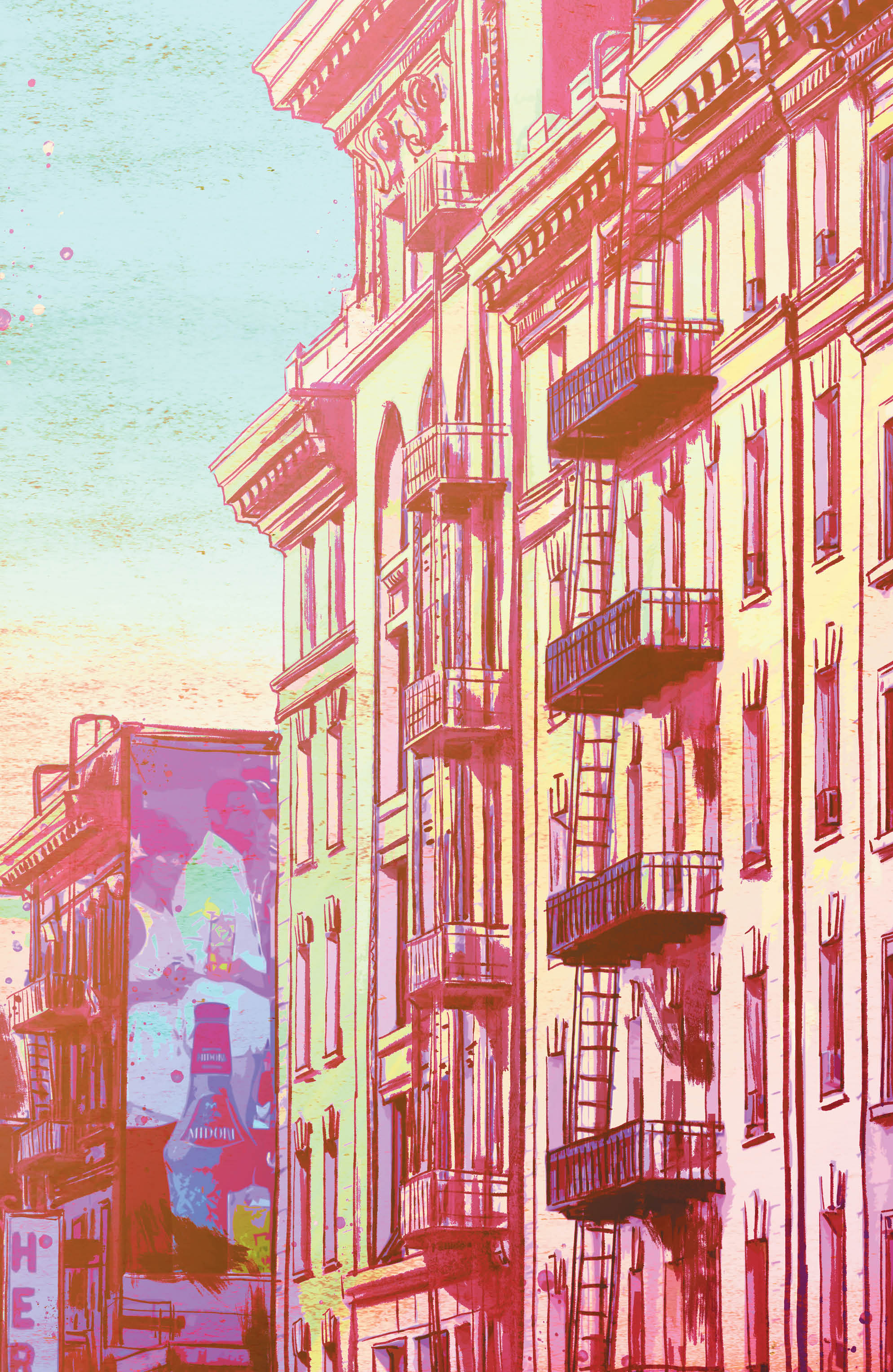 This book accomplishes everything it sets out to do.  There are no negatives today.

Pearl #7 illustrates the limits of comic book storytelling through the crime narrative.  Extremely down-to-earth while including an incredible amount of detail, its an eye-opening looks at Pearl and her relationships.  Despite the fact that Pearl is about to face a much larger world while on the run, we the readers know her better than ever.  Its an amazing book that turns flaws, imperfections and alterations into art and beauty.