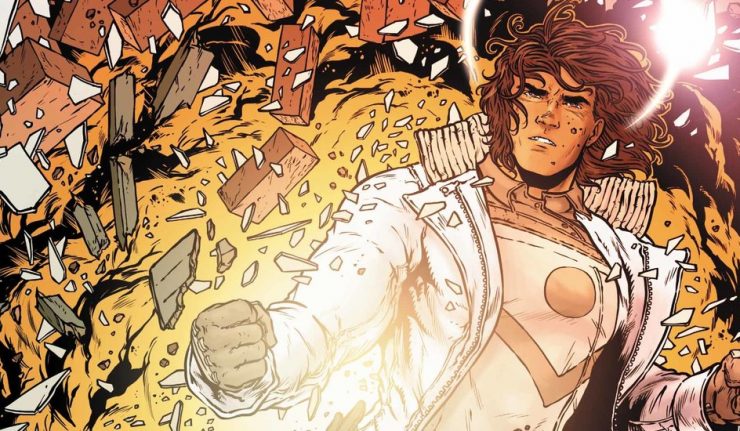 Warren Ellis slows the pace ever so slightly as The Wild Storm edges closer to its climax. In what is mainly a dialogue focussed issue, Angie Spica and company grow closer than ever following the situation they ended up in the last time readers saw them. Bendix continues to be evil in space while Lauren opens up to him. Midnighter and Apollo also have a touching moment together. Altogether this issue develops on the many relationships of the series.

While last month’s issue was a testament to Ellis’s action writing this month it’s his dialogue that takes centre stage. At issue 21 even those previously unaware of Ellis’s work can understand why he is considered one of the greats. This issue does a fantastic job of fleshing out the characters that have been lost in the plot the past few months. It’s nice to see those who have always been present in the background stand up and get a little more page space for once.

As is always the case Jon Davis-Hunt’s artwork is sublime. This month it is Apollo orbiting around the Earth that gets his attention in a couple of frame worthy pages. To some extent it’s strange that this is just an aspect of the series now, but reading through the pages waiting for the ‘Jon Davis-Hunt’ moment is some of the most fun of the Wild Storm. As a more grounded exposition driven issue there aren’t many moments for Davis-Hunt to flex his muscles. This obviously doesn’t stop him from rendering some awe inspiring establishing shots before pulling in to the intimate moments.

This is far from a bad issue but it is a step down from the previous instalments. Exposition is necessary but it would really help the pacing of the series if it was interwoven with the action now and again. While it’s great to learn a substantial amount about a few characters, waiting another four weeks for some excitement is an odd strategy. At times the series is reminiscent of watching Dragon Ball Z as a child, the episodes of complete filler are long forgotten after the mind numbing action blows readers away.

It should be stressed however that Warren Ellis filler is significantly better than most. There’s enough here to justify reading the issue but do not expect to be blown away by the action and insane art detail of last month’s issue.

The Wild Storm #21 is a good issue that fails to take the series any further than last month’s offering. A necessary part in the grander narrative that slows the pace perhaps too much for some readers.