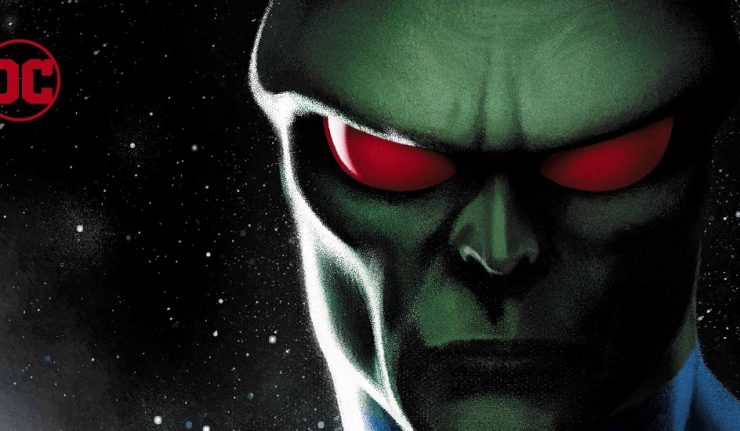 J’Onn resumes the investigation into Ashley Addams alone after his falling out with Diane.  While he tries to make amends, the trail becomes hot once again with emotional residue.  Meanwhile back on Mars, J’Onn has to dabble in some shady business to protect his family, but at what cost?

To what lengths will you go to protect what means the most?

Everything can change with a different perspective.  What may seem morally wrong to an onlooker may be an act of survival.  What may seem like a dead end or a trail gone cold could be crystal clear from a simpler perspective.  Every pair of eyes sees the world differently, and J’Onn employs multiple perspectives as he tries to protect his family back on Mars and investigate the Ashley Addams case on Earth.  The dynamic creative team of Steve Orlando, Riley Rossmo, Ivan Plascencia, and Andworld design do a phenomenal job of illustrating those multiple perspectives as they move through time and space.  J’Onn J’Onzz’s story is one of pain, loss, and identity as we see the Martian Manhunter struggle to find confidence in his choices on two worlds.  In this captivating fourth issue, J’Onn returns to his investigative roots to find clues about Ashley Addams, H’Ronmeer’s curse, and who he’s become.

The issue starts off with a dazzling return to Ma’Aleca’Andra before all is lost.  It is beautiful, majestic, and complex much like C.S. Lewis’s Out of the Silent Planet, which acts as a great influence here.  It begins in a Ma’Alenca’Andrean emergency ward where a White Martian appears to have contracted H’Ronmeer’s curse.  The scene displays familiar elements of healthcare as the White Martian sits in the chair getting tested, unsure if they will receive an experimental vaccine because they’re already displaying symptoms and aren’t a Green Martian.  Luckily, M’Yri’Ah is one of the good doctors who insists on helping all patients.  The scene takes place in a foreign land with strange medical equipment, unique beings, and an unfamiliar disease, and still the actions and words of other ring true.  Mars may represent a fallen paradise or a reminder of what was lost, but this opening scene speaks to Orlando’s ability to find universal truths in the smallest moments.  With that scene, we are once again transported to Mars as H’Ronmeer’s curse is in its infancy where catastrophe is predated by love, worry, and guilt.

Mars in Martian Manhunter #4 is very distinct from Earth and the depictions of Mars we’ve seen in past issues.  We see Mars through large, long, and curved panels that make it feel as though we’re observing through the lens of a telescope.  Despite being the red planet, it is largely painted with cool purples and blues, accentuating the cold and distant J’Onn J’Onzz at the focal point of our story.  Mars may traditionally be a planet of openness and sharing, but as H’Ronmeer’s curse looms above, the space is starting to feel more confined.  With the near future promising disaster, J’Onn turns to lowlife crime bosses, recognizable to those familiar with Golden Age Wonder Woman, for a way to save his family.  He is met with an impossible request.  Commit the ultimate betrayal to his oath, status, and integrity as Manhunter and save his family.

Its a decision that weighs heavily on J’Onn, especially as he has to hide it from his family.  This distance can be observed in every corner of the scene.  Even during their glorious Martian sex, J’Onn and M’Yri’Ah are two separate colors when they used to be one, and J’Onn still will not share his hermitage.  Secrets can damage and corrode your entire being.  J’Onn is giving all of the love he can, but by remaining closed off, there is worry, guilt and other negative emotions eating away from the inside.  In the last panel we see on Mars, J’Onn and M’Yri’Ah have nothing but each other, but they couldn’t be farther apart.

Back on Earth in the present day, John isn’t doing much better, still consumed by guilt and worry.  A secret forced to the surface has just cost John his partner, his remaining dignity, and possibly his life here on Earth.  At the end of the day, however, we’re left wondering if anything’s changed as John returns to the only thing he knows: investigation.  For someone who’s lost everything, its easier to see through the eyes of others than peer through your own, and that’s exactly what J’Onn J’onzz does.  We see J’Onn walk through the shoes of an iguana, Diane, and Ashley Addams herself in order to find this missing girl, but it all means nothing if the Martian Manhunter doesn’t know who he is anymore.  That is the key to this issue.  All J’Onn’s empathy and unique abilities on Earth appear beautiful, magical, and useful, to the reader, but ultimately, how can J’Onn put himself in the shoes of others if he can’t remember where he keeps his own?

As the issue continues, we see the procedural manner with which J’Onn proceeds with the investigation.  This is a Martian and a man who doesn’t know what to do with himself.  He is broken and alone, and so the investigation continues.  What follows is a masterful lesson in perspective by Riley Rossmo.  We begin by with an eery look into J’Onn’s memory log.  It appears as home movie footage, deeply personal in someways but far removed in others.  Its something we aren’t sure we’re supposed to be watching, but takes place a time that’s now unrecognizable.  J’Onn picks up the trail through the family iguana, and proceeds to channel its mind and perspective to find its location, another act that seems deeply personal, yet far removed.  It all contributes to a larger questions that Rossmo’s use of perspective begs the reader to consider throughout this issue: Is seeing through another’s eyes or walking in another person’s shoes the same as feeling what they feel?  Experiencing what they experienced?

For our protagonist J’Onn J’Onzz, it comes a little too easy.  Rossmo magnificently captures the simultaneous perspectives of J’Onn and the iguana whose mind he’s inhabiting through simple and beautiful panel-work.  In a style very similar to Frank Quitely, Rossmo illustrates how panels can capture multiple movements through space and time through both J’Onn and the iguana’s perspectives.  Spaceman the iguana’s mind is only focused on the point of least danger.  He moves in the direction in which he is least afraid, his fixations represented by small, white boxes sticking out in the forefront of J’Onn’s mind.  As the Martian Manhunter follows this trail, we still see the rest of the world through J’Onn’s perspective, and as he approaches the Spaceman, we see J’Onn’s movement through time in the same way that Spaceman does.  All of this is exquisitely laid out for the reader in an array of colors, panels and an inner monologue.  J’Onn approaches Spaceman, and we all enter his mindscape.

The two splash pages that follow are at once beautiful, breathtaking, and terrifying.  Rossmo creates Spaceman’s entire world for J’Onn to step through and peer into with ease.  The way Spaceman sees the world around him is something to marvel at, but for J’Onn, he’s disappointed because Spaceman was but “an innocent instrument.”  In Spaceman’s world, panels float away to reveal a paradise created by Ashley herself, who appears as a goddess to her grateful pet.  As J’Onn imposes panels to a sense of Spaceman’s visions through time, we see Rossmo once again capture J’Onn moving through Spaceman’s perception of space through time with Spaceman’s mind.  Don’t think about it too hard, look in awe at the beautiful pages before you.

The final scenes take us to a world much darker.  Orlando, Rossmo, Plascencia, and Andworld Design do a phenomenal job juxtaposing moments of beauty with moments of darkness.  By hiding dark truths within seemingly loving and beautiful moments, the reader is forced to reconsider their views of J’Onn.  At the same time, however, the creative team hides moments of hope even in the darkest scenes to remind us that J’Onn is not beyond saving.  These moments are illustrated beautifully through an incredibly powerful nine-panel grid towards the end of the issue.  John Jones looks into the mirror as he silently apologizes to Diane for not being able to give up the life of John Jones.  As he reverts back to his Martian form, his head hands low, unable to look his true self in the eyes, and he quickly reverts back to John Jones.  He needs help, he needs Diane, and he’s seeking it, which is a step in the right direction.

This issue cuts deep and true while shining a light on the beauties of Earth, Mars, and the world of an iguana.  No negative here.

Martian Manhunter #4 is scary and painful.  It uses frighteningly powerful truths to ask us to reconsider the glue to the Justice League that we thought we always knew.  By the end of the issue, J’Onn is through mental, emotional, and, physical torments that the reader and the Martian are afraid to face.  Ultimately however alone J’Onn and Ashley may appear to be, we the readers are here, anxious to see J’Onn become the great leader we know he can be.  Sometimes in order to ascend the greatest heights we must experience the lowest depths, and that’s where we are with J’Onn J’Onzz.