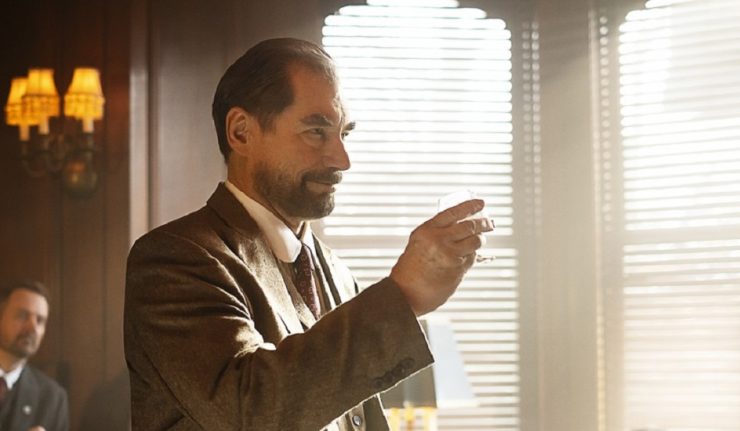 While Robotman and Negative Man were busy in Jane’s head, Rita and Cyborg were paid a visit by none other than the Beard Hunter.  Sent by the Bureau of Normalcy to track down Niles Caulder, the Beard Hunter will stop at nothing to find his target.   Plus, Niles Caulder is hiding a deep, treasured, and hairy secret that could lead to immortality.  Why is this secret so important to him, and how far is he willing to go to keep it?  Find out on this week’s Doom Patrol!

After last week’s dark journey into the depths of Jane’s mind, Doom Patrol episode 10 is a nice return to levity and adventure with two story lines in search of the truth.  The A plot deals with the Beard Hunter, a hilarious mercenary who lives with his mom and is able to know everything about someone by consuming their essence through their facial hair.  Nothing about that sentence is normal, but welcome to Doom Patrol.  The beard hunter is primarily used to bring back the comedy after a string of necessary and important but heavy episodes, and it works like a charm.  He’s a great character who brought levity back to the show when it was needed and plays a relatively important role in the Doom Patrol’s search for Niles.  Ultimately, however, the Beard Hunter embodies the notion that sometimes, the truth can only be revealed through the ridiculous.  Cyborg has something going on inside his head, and nobody else but him knew what it was until the Beard Hunter showed up and forced some sense into him.  Sometimes we all need a little sense forced into us.

The B plot involves Niles Caulder’s past, his love of exploration, and a secret he’s kept all these years.  It makes for a compelling watch as we see Niles survive in the Yukon despite insurmountable odds thanks to a mysterious creature that Niles will do anything to protect, including killing a trusted friend.  Nevertheless, this backstory tends to be fairly compelling in most places, and reveals some interesting ideas about the treatment of normalcy before WWI and how it was treasured and not hunted.  Ultimately, it boils down to something as fruitless as eternal life, no matter how compelling the sentiment may be.  It will be interesting to learn now the show will progress with something so powerful on the line.

The primary negatives have to do with Niles Caulder’s backstory in this episode.  The first is that the color palette is too dark in the beginning, and it can be hard to see.  Shows often run into this problem frequently during action sequences at night, but it was almost impossible to see what was going on in the first sequence.  Afterwards, however, things got a lot better.  Doom Patrol has also been really good about its color palette over these past ten episodes, so it’s not something to hate on too much.  Unfortunately, however, I’m not sure I was sold on the necessity of everything they included in the backstory.  Despite everything Nile’s goes through, it’s still very difficult to root for Niles or feel for him, and it’s not Timothy Dalton’s fault because he’s giving an excellent performance.  This is coming from someone who has not read the comic (yet).  Once we meet Niles Caulder’s secret, its very easy to feel for her, but Niles seems to forever remain selfish.

Doom Patrol brings a little bit of levity to “Hair Patrol” in an episode that continues to show versatility without sacrificing quality, save for a few small points.