When the Ninth Circle’s agenda involves a US General of Diggle’s interest, aspects of John’s past are revealed as Dante successfully acquires Felicity’s Archer program to further their goals; flash-forward, Mia and Connor recon tech for Felicity to extract information from the Galaxy helmet.

I’m just going to say it: Who ya gonna call? Ok, now that that’s out of the way, let’s get down to the nitty gritty. 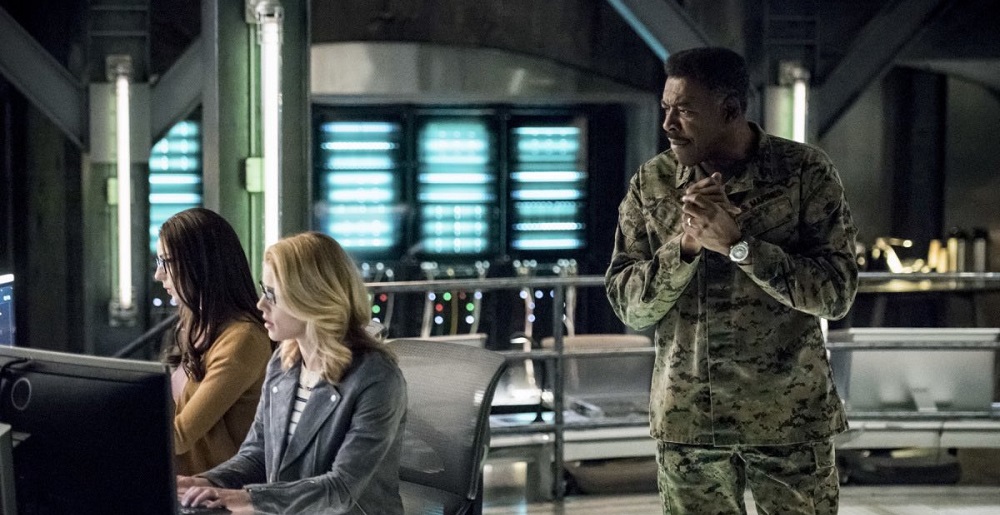 This chapter focuses on the issue of legacy and family bonds, but this time not entirely focused on Oliver’s current dilemma with Emiko. From the moment of his first appearance, the most prominent aspects of Diggle’s background had been his disillusion with the military, his issues with his brother, and reconnecting with his wife Lyla. The issue of his upbringing has not been spotlighted until now. Bringing in a stepfather figure in the form of General Stewart offers an additional inspiration for Diggle to enlist. (More on the choice of last name later.) Hudson’s chemistry with Ramsey works in that we have the well-balanced elder soldier and his wayward stepson, just as disciplined but still carrying a chip on his shoulder. Clever on the writers’ part to draw on John’s and Andy’s survival training from Stewart as the inspiration for his codename. The characteristics of the general – need-to-know information, ingenuity, protocol, pacing back and forth behind Felicity and Elena at the computers – are easily seen as well as John’s frame of reference. The friction between them also gives Stephen and David a role reversal, whereas before it would be Oliver conflicted by his father’s actions with Diggle offering counsel. The resolution between John and Stewart works in that it is achieved over the course of the mission rather than a five-minute sit-down. That hug John offers his stepdad doesn’t feel forced at all and you honestly hope to see Hudson in the bunker again as those doors close. 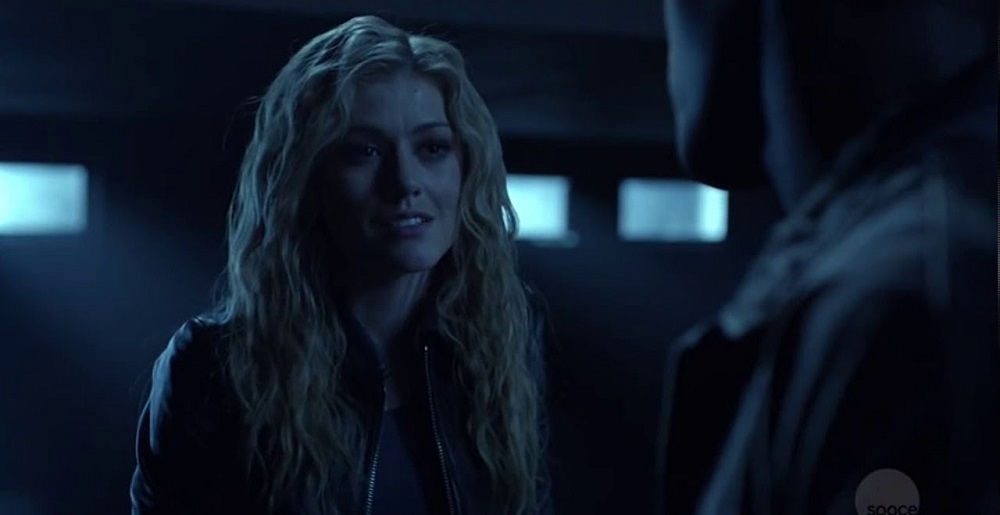 John’s conflict with his stepfather is paralleled by the flash-forward sequence focusing on Connor’s issues with John Diggle Jr., or “JJ” as he’s called. It answers the question of what happened to Diggle’s biological son if he raised Connor, who is Ben Turner’s son. What works is that it is a side conflict compared to the loss of trust between he and Mia, and, like Diggle and Stewart, need this recon mission as the opportunity to hash things out. Joseph and Kat have great on-screen chemistry together, and that embrace and sexually tense moment says there is a lot more that can be developed between these two. The revelation of history repeating itself with Diggle’s family is a good 180 and is in step with how the world of Arrow has been turned on its ear in the future. Bringing in the notion of Deathstroke’s legacy as a low-level gang works and is great drama to find out that JJ has rebelled and become one of them. Given Team Arrow Version 1’s contentious relationship with Slade Wilson sans Oliver, and his son Kane Wolfman following in his footsteps, it’s easy to see how that would be JJ’s best idea to flip the bird to his dad. Keeping him off-screen also enhances the estrangement Connor has suffered with his former best friend. The motif of Deathstroke coming between brothers-in-arms is not lost and is brilliant drama for the new generation. 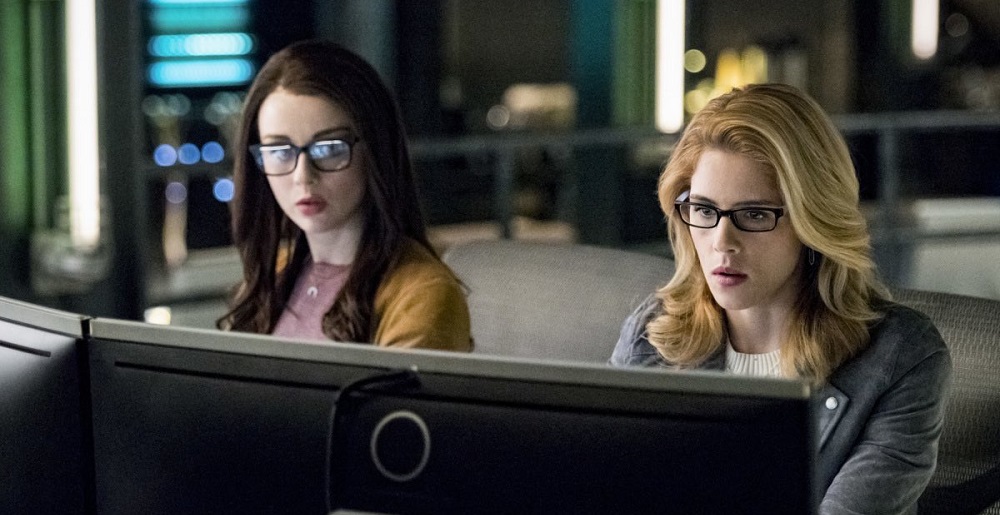 Speaking of legacies, besides carrying the next generation of badass, Felicity’s situation involving Archer reveals much about where her character is headed and possible reason for departing at the end of this season. This is balanced by her flash-forward scenes which reveal her corrupted vision of what Archer could be via her dissection of that helmet. Kacy and Emily, as previously stated, have great bestie chemistry together and the writers place Elena in the role of both soundboard and counsel. Felicity knows that there are other things beyond Team Arrow that she wants to be remembered for. Her priorities are shifting now that she’s expecting. This is a Felicity that’s trying to be more pragmatic and forward thinking. With the theft of Archer and how it’s been corrupted so easily by The Ninth Circle, her rose-colored glasses are ripped off and she’s forced to make a difficult choice. For a girl who lives in the world of technology, destroying a creation she’s spent an entire season developing is an incredible sacrifice. The writers are lightly putting Felicity in the role of Victor Frankenstein and Archer her Creature. The program is out there and she abandons it and all signs point to Elena (?) as the source of its survival and dominance in the future, destroying all she holds dear. 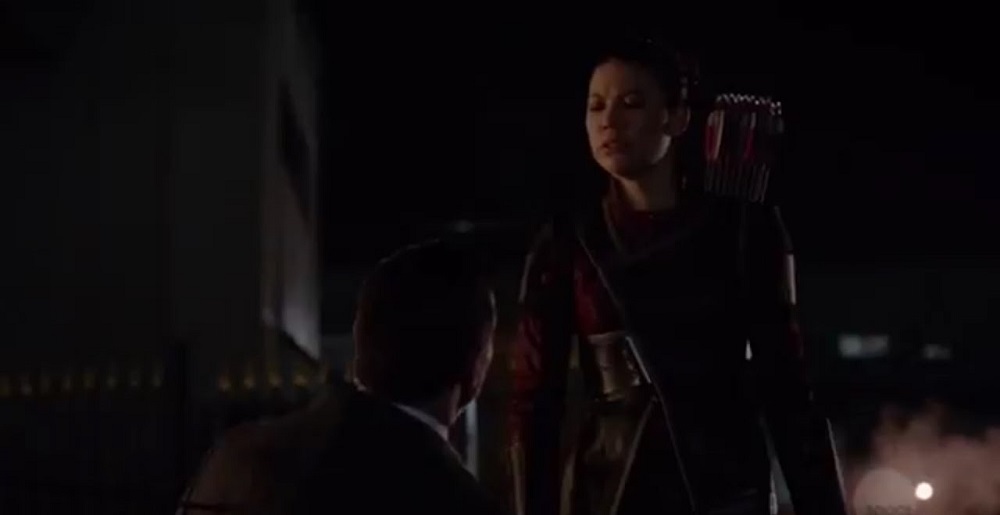 A surprising decision on the writer’s part is not reserving Emiko’s discovery of the truth about her mother’s death and what she does with that information till the finale. Given that it’s three episodes away, it’s obvious that they have other plans for Oliver’s wayward half-sister. Cool scene of Ollie and Emiko’s arrows shattering each other; there was no better way of showing they are both equally matched in their mastery of the bow. Stephen’s mulling over what to do with the information has been in the background of Felicity’s and John’s predicaments is a noticeable shift. The writers are consistent in their effort to ensure that all of Team Arrow’s subplots aren’t overshadowed by Oliver’s weekly grumbling. Having Emiko still make the choice of accepting Dante’s help in spite of this revelation was a good way to deceive the audience into believing Ollie’s words fell on deaf ears. Surprising quick end to Dante, though; Paul should have been involved in the final conflict. Still, given that he has manipulated this innocent girl and killed her mother to assure her allegiance – a correct deduction on this reviewer’s part, by the way – it was a fitting end. However, that leaves open the question as to what path Emiko will take. By taking the life of the man who murdered her mother adds one more shade of difference from her brother. Oliver had every reason in the world to kill Slade Wilson for Moira’s death, but he chose to be strong enough to let him live. Emiko took the easier path only because that was what she had been trained to do. That could also be how she sees her life now that she realizes she had been misled by the Ninth Circle from the moment she walked into Dante’s apartment as a nine year-old girl. She doesn’t see any other path for herself. She still has that biological weapon and, based on the trailer, still intent on punishing Oliver for the sins of his father. Rene’s earlier conversation with Dinah about her mercy is the writers’ way of pointing to a possible way in to Emiko’s heart. 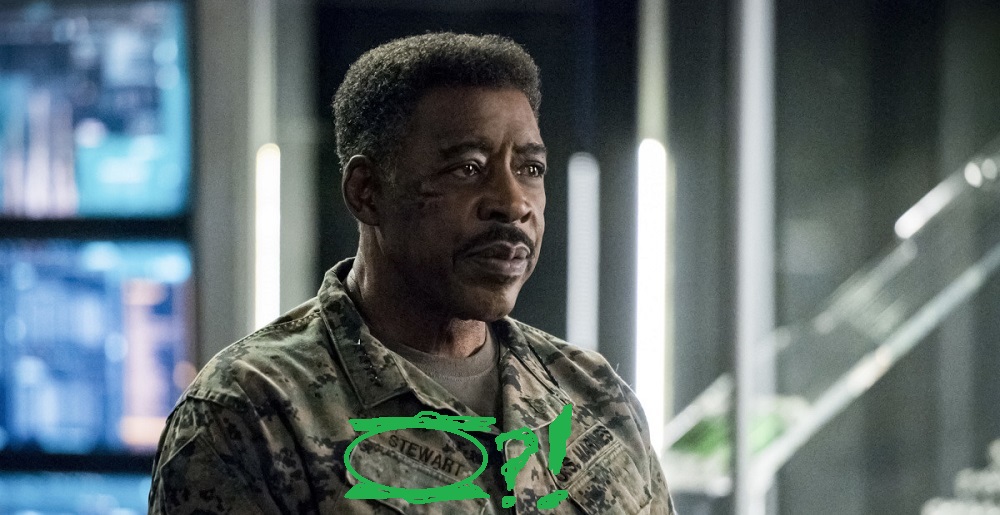 Biggest complaint is the choice of John’s stepfather’s last name. This, of course, is probably having all Green Lantern fans drawing connections between our beloved Digg and John Stewart, the first African-American Green Lantern created by Neal Adams and Denny O’Neill during their Green Lantern/Green Arrow run. While fitting, this reviewer highly doubts they would belittle this original character by saying “HA! Fooled you! It’s been Green Lantern all along!” While a cool idea that had been hinted at in the Elseworlds crossover, I don’t think this was the best of choices. Diggle has to stand on his own and when they grey the line like this, it risks taking away the substance that the writers have crafted for Ollie’s brother-in-arms. It just makes him Hal Jordan’s fill-in, and admittedly it’s very easy to draw connections from the first season. But I feel it robs of the work that’s been done on Diggle. He’s his own hero as Spartan; he doesn’t need to be GL. Also, again, the quick death to Dante feels like a waste; Adrian Paul’s character was billed as one of the deadliest fighters on the planet and I was hoping to see a square-off between Emiko and Dante or Oliver and Dante. While he deserved the execution, I feel that the writers rushed that revelation and did not use him to his full potential.

I give this episode a solid 4 out of 5. Great character development for the main players and masterful inclusion of Ernie Hudson in the Arrowverse that didn’t feel forced at all. The parallels between father and stepson in both present and flash-forward sequences were creative and broke ground. However, again, wasting a powerful character like Dante and denying another fight sequence with Adrian Paul – The Highlander himself – was a bad decision that doesn’t serve to prop Emiko as the big bad at all. Rather, she seems more Vader-esque in the sense that she’s turned to the Dark Side with the small chance of redemption. Time will tell if this transition is handled the right way or not. See you guys next week!