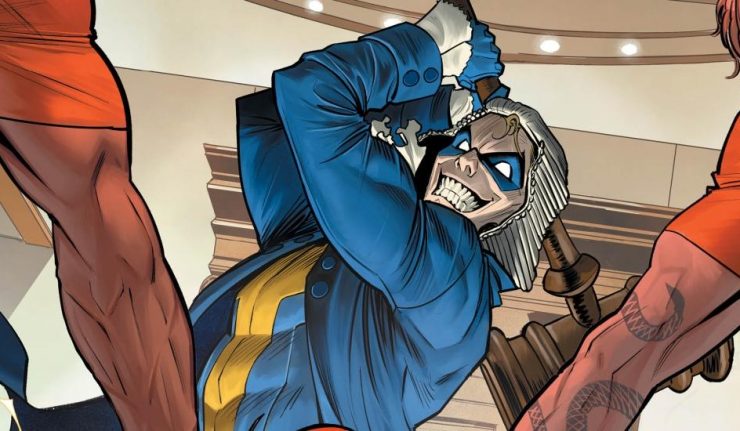 Riot in Central City! Trickster has pulled out all the stops in his assault on Flash’s hometown, and the Scarlet Speedster is powerless to crack Trickster’s code! Our hero is faced with an impossible choice: save the people of Central City—or let the villain who caused it all escape to wreak havoc another day!

Last issue’s cliffhanger left the Flash in a rather horrifying situation, with the Trickster having apparently cut off his legs. This was rather gruesome, but served as a truly shocking move and clearly demonstrated that the Trickster is far more dangerous than the annoyance he used to be.

In this issue Barry has an epiphany that he has been refusing to face his own pessimism. By realizing this and confronting this pessimism, Barry experiences a moment of happiness. Such moments have been depressingly rare for Barry over the last few years. Hopefully this will lead Barry to recapturing his optimistic view of life and retain some of this happiness.

Also, I was happy to see that Barry’s time at Iron Heights has come to an end, bringing him back to his job in the Central City PD crime lab, which is definitely a big step towards getting his life back together. Now if only he could patch things up with Iris.

But we will have to wait a bit to see if Barry’s life is back on track, as a mysterious Still Force avatar shows up and sends Barry back to relive his past, stating, “For the Multiverse to survive what is to come, Barry Allen… you must remember… something you have forgotten.”

This is of course the prelude to the Flash: Year One storyline starting next issue. I don’t know what it is that Barry has forgotten, but if the fate of the Multiverse depends on him remembering it, then it must figure in the major overarching events of New Justice and Doomsday Clock. Clearly something crucial to DCU history is in the brewing.

I have to admit that James Jesse has a deliciously sick sense of humour. He does drop a few bits of dark comedy gold like when he states that the Flash “has a much bigger puzzle in front of him… one that is missing pieces” while the scene segues to a horrified Flash panicking over the loss of his legs.

After a number of times seeing Barry having a realization or making a discovery which gets moves him back towards his proper optimism, he constantly seems to backslide into pessimism again. I really want to believe that he’s found the key this time, but it’s getting harder to believe he’s finally on the right track, but I still haven’t given up hope that he’ll finally get there.

This storyline has been a fantastic reintroduction to the classic Trickster. Williamson has clearly had fun bringing him back into DC canon. And the small peek we got of Flash: Year One looks amazing. I can’t wait to see what this retelling of Barry’s origin has in store for us.