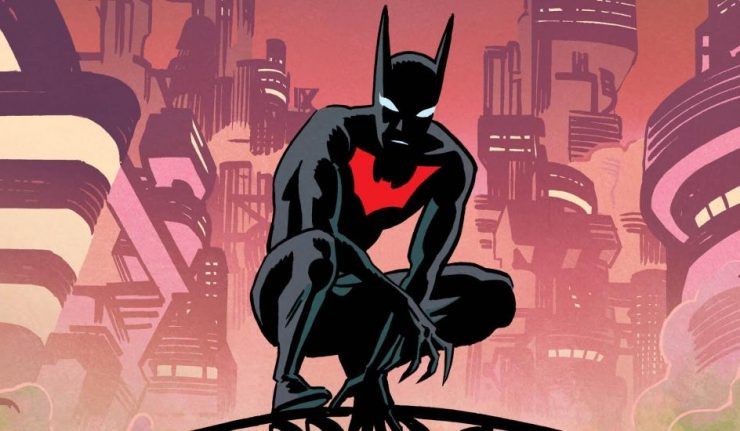 With a series of spectacular high-tech heists, a mysterious new villain known as the Splitt is preying on Neo-Gotham. Only Batman is capable of stopping him, yet Terry McGinnis wants nothing more than to get his life back to normal after his destructive battle with The Joker. Making this even more difficult is the strange, enigmatic fate of Bruce Wayne!

This issue opens with Bruce Wayne visiting Arkham Asylum. In the Batman Beyond future, the Asylum looks much cleaner and brighter than we are used to seeing it. However, it does still hold the criminally insane of Gotham.

I do find it interesting that Arkham’s doctors seem to have changed their opinion of Batman and other superheroes.  Batman has usually had an uneasy relationship with Arkham, with some doctors even believing that Batman’s very existence is the very cause of the insane obsessions of the asylum’s villainous inmates.

Instead, Arkham’s walls are covered in images of Superman, Batman, alongside images of firefighters, mothers and children, flowers, etc. Clearly, the doctors want their inmates to see superheroes as positive role models.

There is an odd moment in the asylum where the lights go out and Bruce disappears from sight – both his guide’s and the readers. And for the rest of the story, Bruce is acting distinctly odd. First, he starts drinking fairly early in the morning. He also fails to provide any useful information or suggestions to Terry. When Terry questions his odd behaviour, he puts it off to Arkham being a disturbing experience. However, the original Batman should be used to Arkham’s atmosphere, which is much less disquieting than has seen it in the past.

And when he seems to be surprised at Terry putting on the Batman costume, it becomes clear Bruce is either an impostor or possessed. And the final page shows us a mysterious inmate in Arkham that seems to hold the key to Bruce’s behaviour. It’s unclear who the villain actually is, but having a villain learning Terry’s secret will definitely pose a massive danger.

It doesn’t seem like Matt’s going to be returning to the role of Robin soon. On top of the trauma from his encounter with the Joker, or perhaps because of it, Matt’s grades in school have taken a nosedive. Terry takes this as further proof that his decision was the correct one. If Matt is to win back Terry’s permission to be Robin, it will likely take weeks or months to do so.

I find this a shame, as Matt becoming a new Robin was a fresh and interesting addition to the Batman Beyond lore. While this comic has been very good at bringing back the classic concepts of the original cartoon, it still can benefit from injecting some new elements as well.