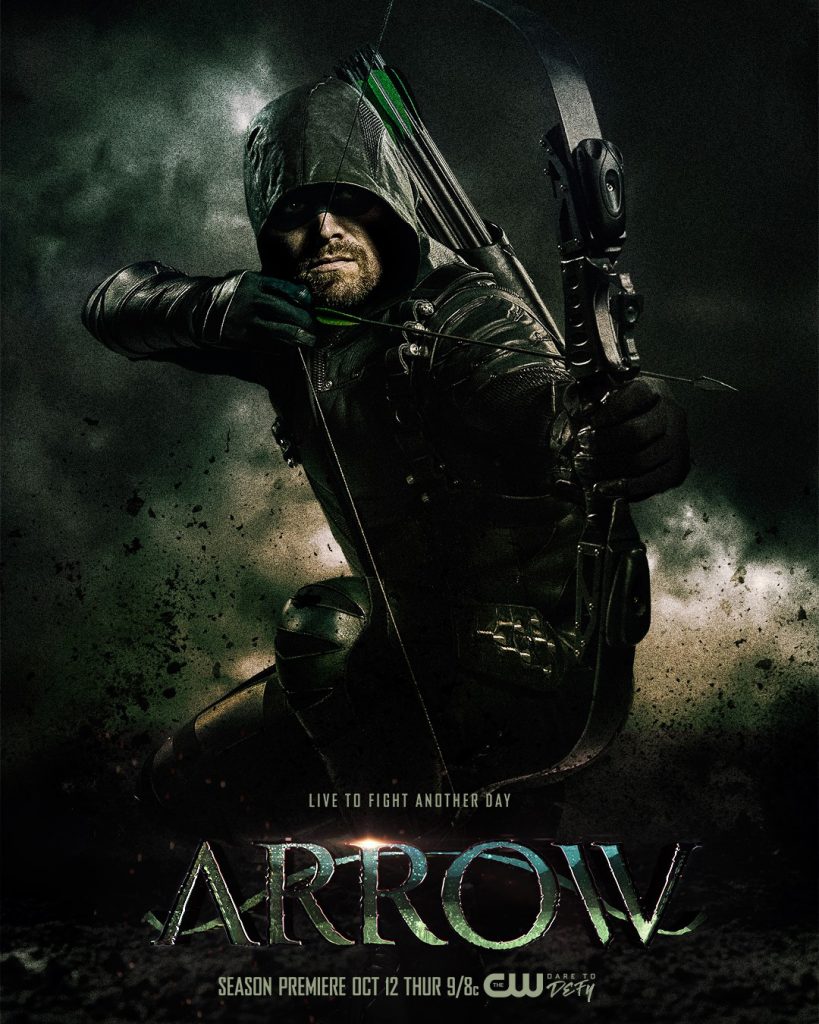 When a Team Arrow operation results in the violent deaths of two guards, involved offer their POV’s on what went wrong; Roy Harper returns.

So….Roy happened. This week the stakes got raised and an intriguing format of storytelling with enough twists to keep the audience engaged. 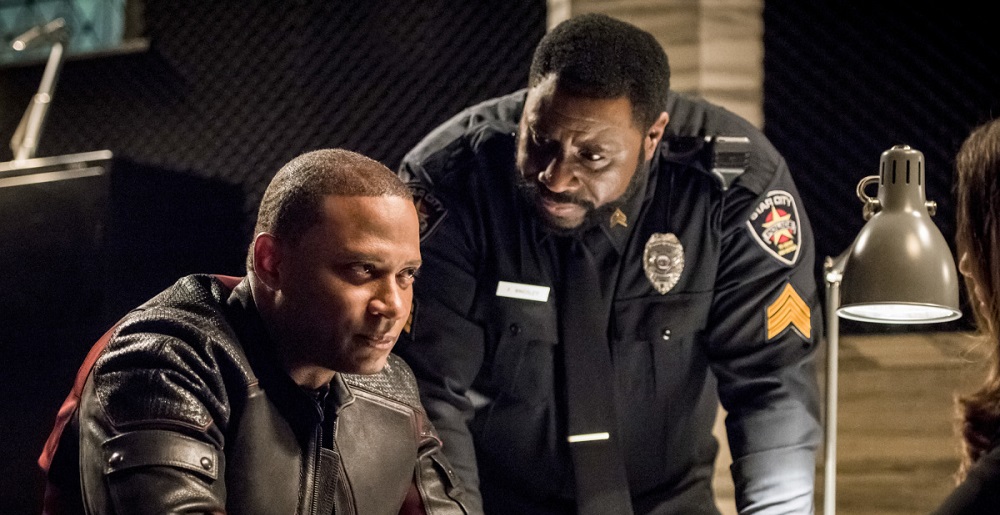 I want to start with the after-the-fact approach to the plot. I remember watching Batman: The Animated Series episode called “POV,” in which officers of the GCPD are interrogated for a botched sting operation that revolved around the possible death of Batman. Much like that episode, a death has occurred and it has upset the delicate relationship between the SCPD and the deputized Team Arrow.

The writers are smart to keep the viewer engaged by having each member add something to the story, told from their point of view. Having Sergeant Bingsley involved works in that he has never been on board with this alliance with known vigilantes; this gives him an excuse to cast a harsh eye on all these “heroes” have to say, especially with Oliver. You can hear great aggravation from Stephen’s delivery that reflects on this jaundiced viewpoint of the sergeant.

Wattley doesn’t overplay it and steers away from the clichéd by-the-book cop routine. From the comical bottomless pit of Felicity’s pregnancy food craves to Oliver’s morose, aggravated demeanor, the plot points offered to the narrative are cleverly filmed in muted tones and visually diverge from the verbal descriptions. What is also clever is that the twist of Dinah actually being in on the cover up, and the actual truth shown in regular color. 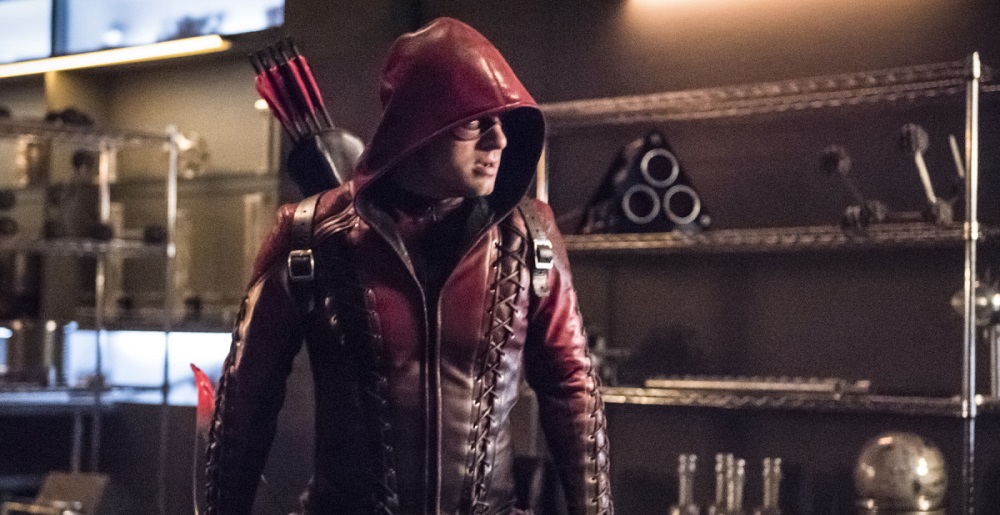 The return of Roy Harper, aka Arsenal, works in that his initial conveyance to Team Arrow is one who has finally gotten his act together. Colton has some great action scenes that show Roy combining his parkour skills with Oliver’s training with the giant fan, which only furthers the Dick Grayson aspects of his current status.

Given his active involvement in the flash-forward sequences, you had to wonder when they’d bring Present-day Arsenal back. Through Roy the viewers learn what Thea has been up to as of late. The writers are creative in making the prodigal son seem like the answer to Team Arrow’s problems, and then reveal him to be the true guilty party. Further, by tying in his previous anger issues, the Mirakuru exposure, and his post-Lazarus bloodlust into the cause of his bludgeoning two innocent guards to death explains his outburst in the future in a previous episode.

Oliver trying to cover up his former protegé’s mistake is a callback to season two as well; no one told Roy about his killing a cop while under the Mirakuru’s influence. Oliver has always seen Roy as a younger brother that had great potential if he could conquer his demons. It’s that mentality that is enough to make him break away from his promise of transparency and cover up the accidental deaths of those two guards. 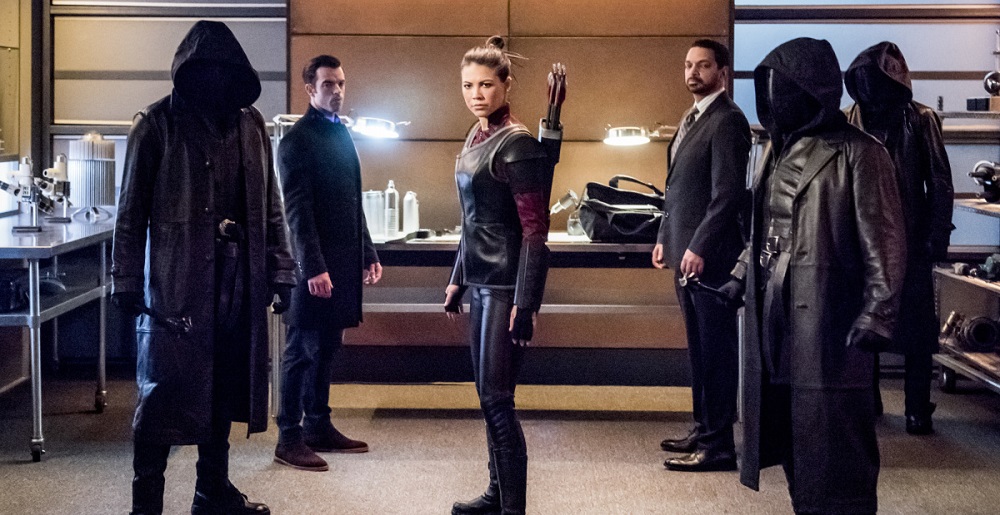 Emiko cemented her role as the new big bad in this episode moreso than before, and Sea delivered a powerful performance through those lines. If stealing a biological weapon wasn’t proof enough, Rene failing to bring Emiko back and discovering her Kylo Ren-esque role in the Ninth Circle did the job. The writers push forth how truly ruthless Oliver’s half-sister is through both her intention to vilify Team Arrow and destroy all the Queen family held dear. Sea’s vengeful, proud tone as she describes how she knew about the bombs on the Queen’s Gambit and said nothing is perfectly balanced as Stephen’s look of shock.

When one takes into account how much Oliver Queen has had to endure and survive for the past decade, this revelation is mind-blowing. Even though she didn’t plant the bombs herself, she had an opportunity to save her father and Oliver as well, but chose not to for petty reasons. Having Oliver buried under a slab of concrete as his world is metaphorically crumbling around him with Felicity trying to reach him is a great cliffhanger. 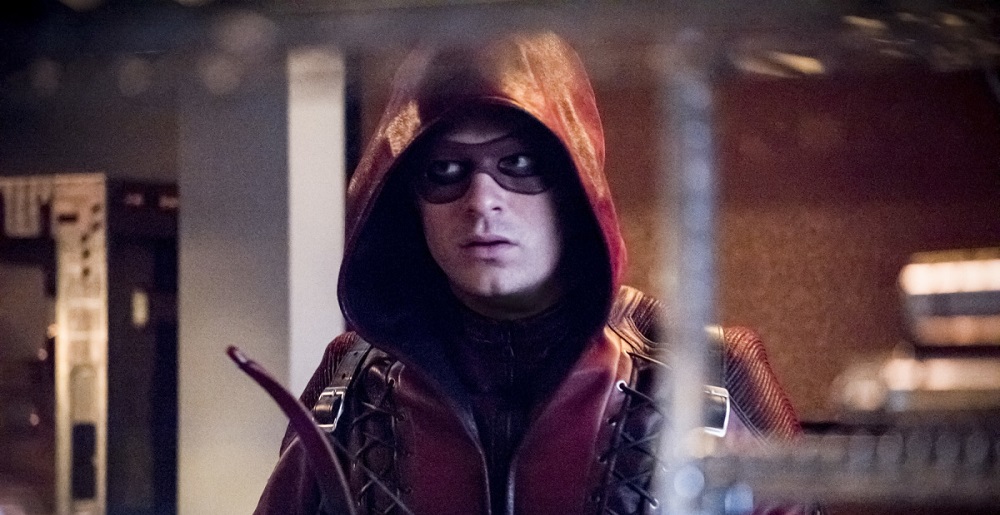 I understand Oliver’s need to protect his family, but I don’t agree with his pinning the murders on Emiko herself. That seems counterproductive to his desire to save his sister from this dark path she’s been put on. Wouldn’t framing her for a crime she didn’t commit work against that agenda? Also, there are times when Stephen’s controlled anger works, and other times it doesn’t. Given that Roy kept a vital piece of information about his current state of health to himself, wouldn’t Ollie let him have it for what his negligence cost the team?

They have worked long and hard to earn their positions as legal vigilantes, and their ace in the hole proves to be the maguffin that could ruin it. Why hasn’t the team, especially Diggle, laid into Roy? Also, the writers are using Emiko saying “Goodbye, brother” similarly to Ollie’s “You have failed this city”. It’s definitely running the risk of becoming satirical. And speaking of satire, Virgil is in danger of being a clichéd Irish character with bad lines. 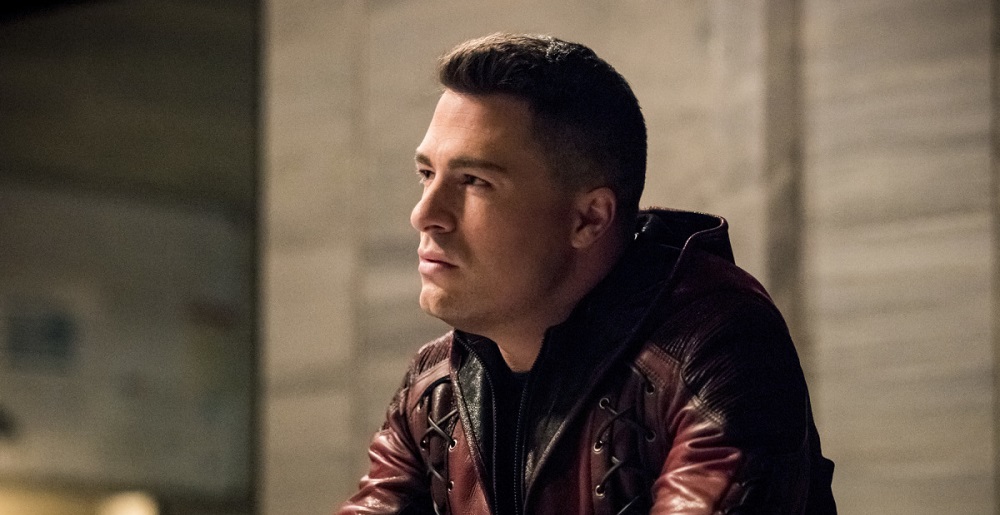 The POV was very well handled, containing some great acting from the whole cast. As the season is two weeks away from completion, the stakes are higher and the odds are stacked against them. I personally cannot wait to see how this all ends. See you guys next week!