Review: ADVENTURES OF THE SUPER SONS #10 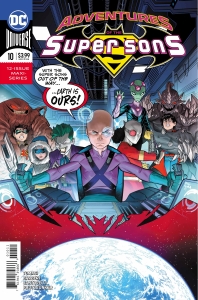 Adventures of the Super Sons #10: It’s the runaway train from hell! Superboy and Robin better hold on for dear life as they ride a 20-megaton cosmic engine of mass combustion (that’s a pun!) into their final battle with Rex Luthor! But Rex has got a brand-new army of shiny young super-villains ready to conquer all they survey…will the son of Batman and the son of Superman be enough to stop him?

The final issue of the Super Sons ongoing title had a framing sequence featuring an elderly Jon Kent reading the main story to two grandchildren from a book titled “Adventures of the Super Sons.” That story and series concluded with Jon finishing the last page in the story, then getting up to put the book back on the shelf, getting down “Volume 2” of the book. This served as a segue of sorts into the current miniseries.

I know that the futures depicted in comics are far from certain, but it does seem heartening that Jon and Damien’s friendship continues well into their senior years in at least the particular timeline shown here. It seems that their friendship has the makings of one of the great superhero friendships of all time, potentially even stronger and more enduring that the bond between their fathers.

Unfortunately, it seems that the android Jonah Hex won’t be hanging around, but he got a sendoff befitting an old west anti-hero, being shot by the villain with his own gun after saving the kids – and calling in the cavalry. Tragically, Hex’s newly gained free will leads him to sacrifice himself for his friends.

And speaking of which, Tomasi is clearly drawing the threads together in preparation for the series’ big conclusion, as the cavalry consists Tommy Tomorrow, Joker Jr., and the boys’ future selves they encountered in the house of Secret Mysteries. With nearly everybody from the series so far returning to take part, this ensures that the final confrontation between the Super Sons and Rex Luthor’s Injustice Army will be an epic battle.

Also, this issue answered a quibble I had about the idea of Lantern trainees such as Al-X being sent on dangerous missions without a power ring to protect themselves. This seems a somewhat foolhardy practice and somewhat uncharacteristic of the Guardians to place young Green Lanterns in. However, Tomasi offers an explanation for this, as it appears that the trainees have a ring with an emergency charge that protects them if they are put in a life-threatening situation.

Furthermore, this allows the Hex-bot to demonstrate his cunning by attacking Al-X specifically to trigger this charge. Hex was able to deduce that the Guardians wouldn’t have left their trainee completely unprotected and used that knowledge to access Al-X’s reserve of power.

The future Damian Wayne refers to the tale he is telling as the “last adventure.” I hope he means that this is the final adventure of the current volume and not the last adventure altogether. This interpretation seems unlikely given that they appear to have maintained their friendship over several decades, it seems unlikely that they wouldn’t have ever teamed up again during those years.

But Tomasi might be telling us that it’s the last adventure that he will be taking the Super Sons on. This is quite possible considering that DC has yet to announce any further Super Sons projects (not counting the DC Zoom books) and the major change in Superboy’s status quo in the Superman books. I hope that this series ends with Jon pulling Adventures of the Super Sons: Volume Three off the bookshelf. However, that might not happen for a while. And it might not be authored by Peter J. Tomasi. 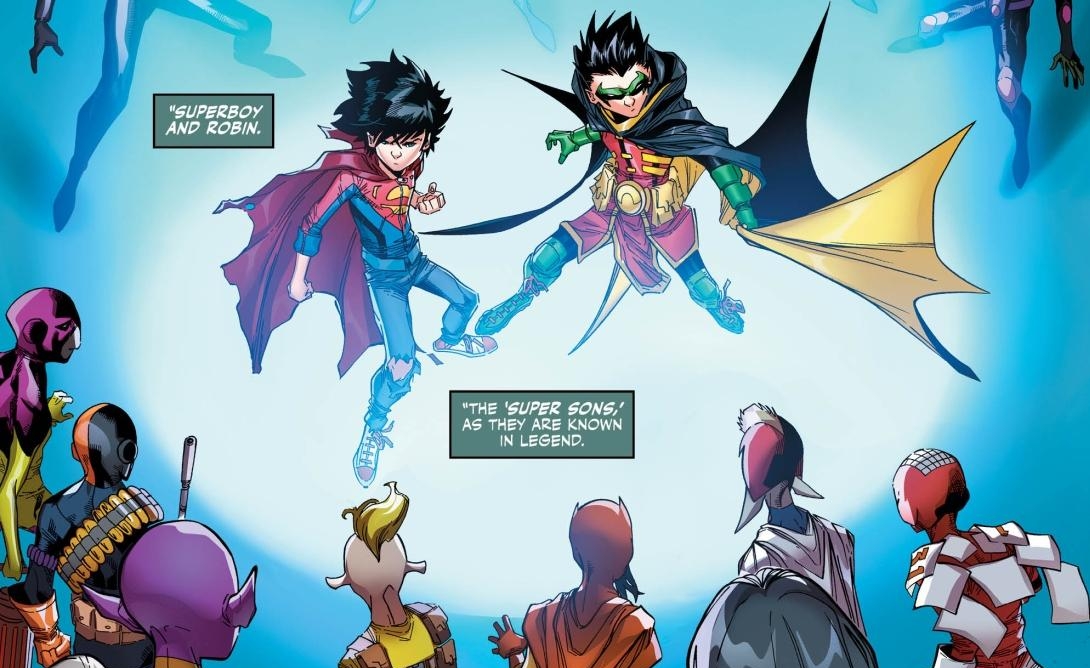 Whatever the future holds for Damian and Jon, this series is great fun and well worth enjoying while it lasts. Whether as an ongoing or mini, Tomasi’s Super Sons is one of the highlights of DC’s finest titles and their lineup won’t be the same without it.