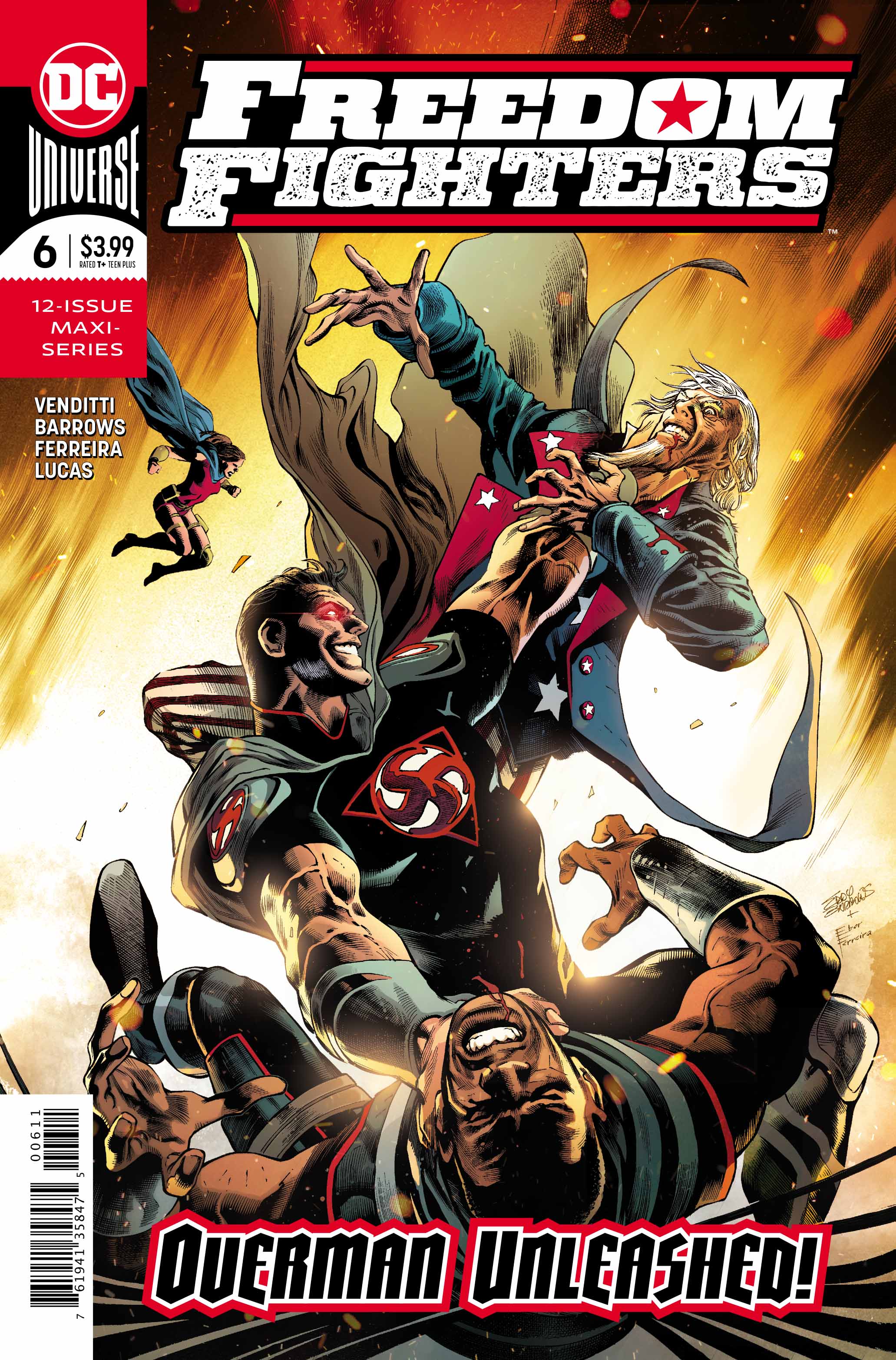 This issue opens with a well chosen homage. The most succinct and evocative retelling of Superman’s origin is seen in Grant Morrison and Frank Quitely’s All-Star Superman.  Venditti, Barrows and Co. give us Overman’s origin in this same manner, although instead of heart warming and heart thumping, it is a little chilling and heart-stopping.  Having been teased for the past few issues, Overman makes his first appearance in this series as he faces the Freedom Fighters head on.

After some “programming” by Adolph III, Overman is set loose to find the Freedom Fighters who are still trying to come to terms with their success of bringing Uncle Sam back.  They don’t have long before Overman finds them.  Neither Overman nor the Freedom Fighters come out unscathed, but the surprise about Overman is a nice touch and creates an even bigger mystery that the team discovers! 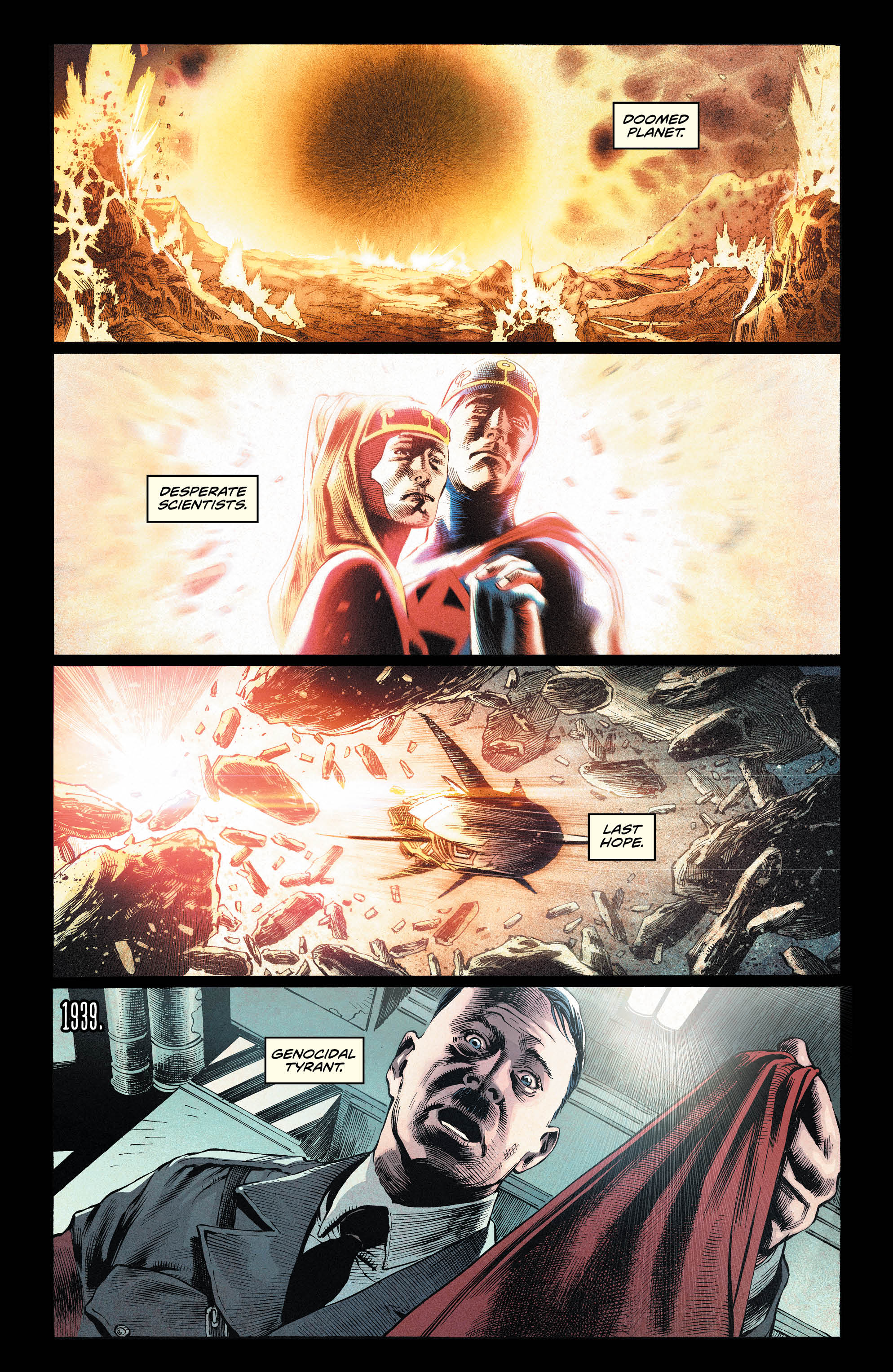 The opening origin sequence for Overman is a brilliant homage to All-Star Superman.  As the original gives the reader heartwarming chills of excitement, this retelling featuring Earth-X’s Adolph Hitler finding the baby Kal-El gives the reader a shocking sense of dread.  It’s the fact that the reader knows what’s coming with those first lines and images…“Doomed Planet…Desperate Scientists…Last Hope….”  It contrasts with Superman’s origin perfectly providing all the emotional depth that the original does with the terror that Kal-El’s presence on this world holds.

The twist at the end with the reveal of Overman’s true nature suggests more questions than it answers.  Perhaps, there is something even greater coming, down the line.  This type of alternate Earth analogue is what makes alternate Earth’s interesting, and this particular element is well played.

Freedom Fighters #6 finally connects the series with The Multiversity: Mastermen #1.  While it’s been assumed that this series is a continuation of this particular version of Earth-X, this issue shows exactly how it fits together.  Also, it utilizes some of the elements of that story to create a larger canvas as Overman’s departure in that tale plays a significant role in the questions that Freedom Fighters #6 raises about the status quo for Overman.  Everyone better go dig out their copy of The Multiversity: Mastermen #1 and re-read it after reading Freedom Fighters #6. 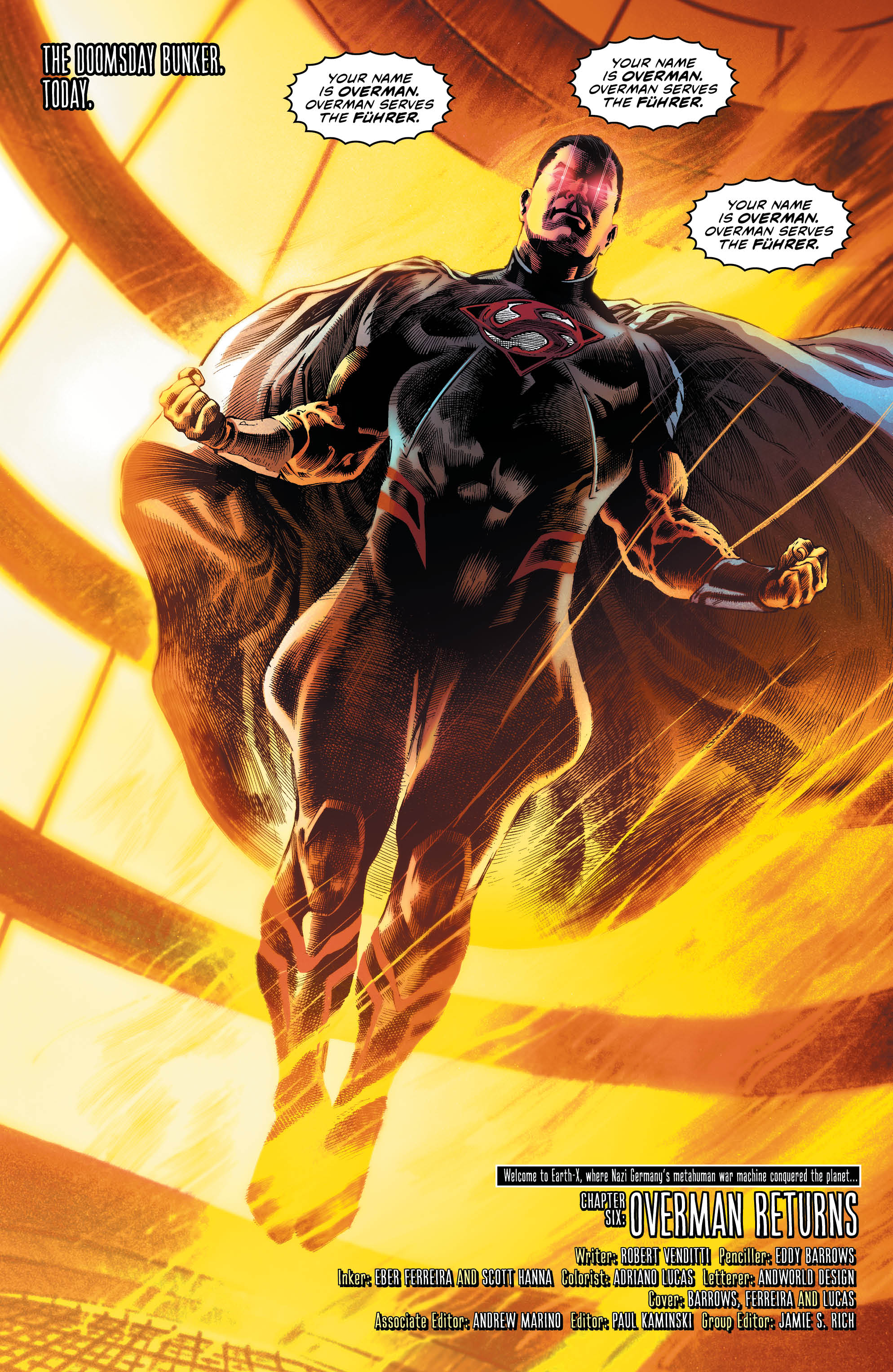 Positives Cont. (man there’s a lot of good stuff in this issue!)

There are some breathtaking visuals this issue as well!  Most notably, the Overman origin sequence which plays off the original version by Quitely in All-Star Superman is perfect.  Additionally, Overman’s first appearance is suitably grand.  Once he and the Human Bomb get down to it, the explosiveness of the Bomb’s abilities is depicted with appropriate energy and vigor.

Freedom Fighters #6 does something very rare in comics today- it utilizes real time.  Since it’s based on the history of World War II, it makes sense, but it even takes into account the events of The Multiversity: Mastermen #1 having taken place in 2016.  Plus, it attempts to provide the proper generations for the current Freedom Fighters. 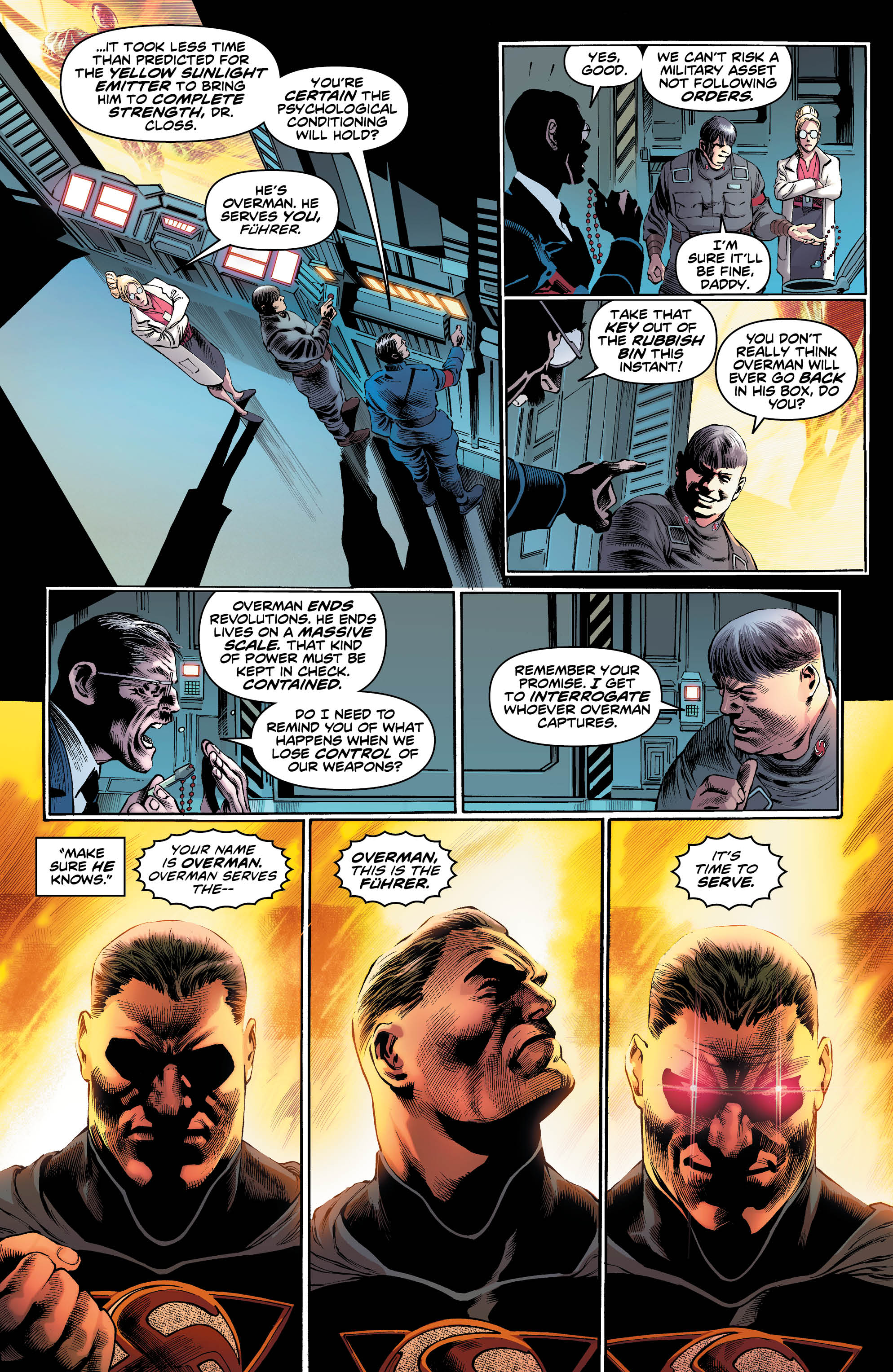 Lastly, Doll Woman’s announcement of the next state of the team’s plan is a sure reason to get everyone back next issue.  What team doesn’t need a Plasstic Man?

This is one of those issue that doesn’t really have a negative.  As has been the case with the past couple issues, what starts out straightforward becomes thought provoking….whereas last issue addressed questions of morality, Freedom Fighters #6 opens up a few new cans of worms to make what seemed simple complex.

Freedom Fighters #6 not only brings Overman into the fray proper, but it does so in a special way.  Utilizing the origin sequence from All-Star Superman and connecting it (finally) to The Multiversity: Mastermen #1, elicit particular responses from the reader that add to the effectiveness of the storytelling.  While it would be easy to end there, not only is the art superb, but the issue provides a clear direction for the team, and opens a door for the further exploration of Overman’s character.