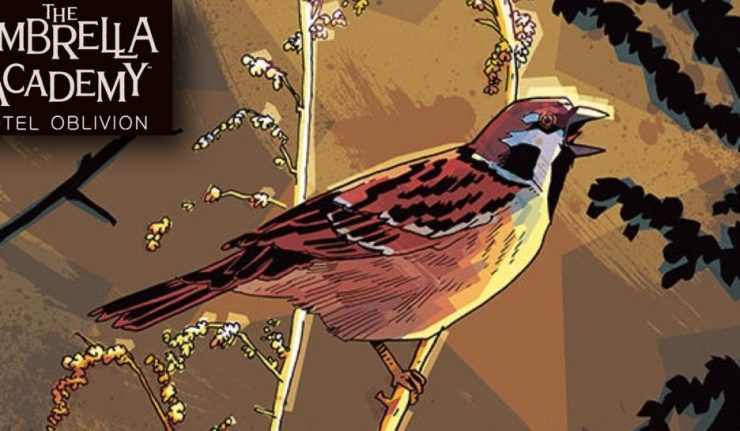 “Lester….Get me a couple of fresh beets out of the crisper….this is a two beet problem.” – Mr. Calhoun
Now, just a few years after Hargreeves’s death, his Umbrella Academy is scattered. Number Five is a hired gun, Kraken is stalking big game, Rumor is dealing with the wreckage of her marriage, a rotund Spaceboy runs around the streets of Tokyo, Vanya continues her physical therapy after being shot in the head–and no one wants to even mention Seance at the moment.  Hotel Oblivion, the long awaited sequel to Dallas, concludes as Gerard Way and Gabriel Ba have provided an issue that is a battle scene upon battle scene that reaches the big reveal…another Umbrella Academy?
Unbeknownst to the Academy, their leader, Reginald Hargreeves, had created an off-world prison to house their worst opponents. Now, a few years after his death, Hargreeves’s inhuman plan has gone terribly wrong, and the Umbrella Academy are not ready for Earth’s nastiest villains are now embroiled in a battle to end all battles. with these villains.

Divided geographically in the city, Rumor/Allison defeats the Murder Magician (who apologizes for trying to kill her) and “rumors” the mother of the still unexplained baby.

Number Five, (The Boy) is out of bullets, Number One (Spaceboy) , Kraken and Seance  and Rumor all converge to a final showdown with all the villains that have broken out of Hargreeve’s prison.   It appears that this is the demise of the Umbrella Academy, until who shows up?  Another Umbrella Academy led by another Number One?  What?

The New Number One…”Lie there brother… we’re here to take control!”  Anyone else read that?  A six member crew that looks similar but different to the Umbrella Academy.  Super Strength by this Number One.  Black vomit/laser out of another member’s mouth.  One has elepathic control of animals, and another has self inflicted pain that resonates to other enemies.  Is this tied to the late Hargreeve’s plan to save the world?  Or is this another version of Hargreeve’s as Mr. Calhoun.  Alternate universe or timeline?  It’s a perfect cliff hanger for another series.

If you expected this issue to sew things up for the Hotel Oblivion, you were incredibly wrong.  This opened more cans of worms for fans of the Umbrella Academcy.  And aptly entitled at the conclusion, Reunion, we can hopefully expect Gerard Way to have another book or seven up his sleeve!

Is Way going to deliver immediately or is he going to have us wait again?  He’s not tied to anything that makes him produce the Umbrella Academy on a regular basis, so this, arguably, could be a cliff hanger like no other.  And that simply stinks.

Those that follow the Umbrella Academy should have seen this coming as other kids were born on that fateful day, so why would they not band together to use their powers for good?  Or for evil?  Lots to work with here, but the aura of “unsureness” of having future issues is a lot to deal with in the investment.

Hotel Oblivion is simply a cliff hanger piece that wets the appetite for further issues that may or may not come.  It was like eating at an awesome restaurant and then it shuts down for repairs for an unknown amount of time.  What?

However, it is better to have eaten and be satiated, than to have not eaten at all.  Therefore, check into the Hotel Oblivion.  You may not want to check out!