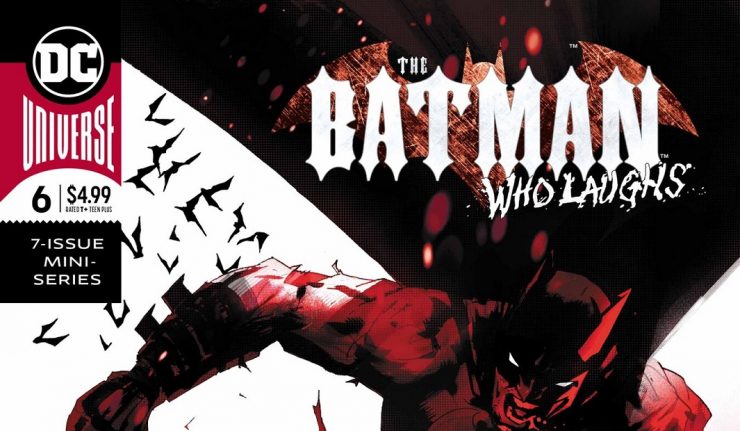 “Ha.  I like you Bruce.  You know what?  You may be the WORST Batman.  But you’ll make a damn good me!”  -The Batman Who Laughs taunting Batman.

Previously, Batman launched Last Laugh in an effort to both save Gotham City as well as lure The Batman Who Laughs to engage in battle.  Batman is resting at about ten percent of his healthy blood cells as he fights to remain the true Dark Knight.  As he explains to both Commissioner Gordon and his son, James, they all control the city’s power grid until the Grim Knight hacks into it.  Bat drones are launched to douse the city with anti-toxin.  And Batman has a plan to outwit his Dark Metal foe.

An averted Bruce Wayne assassination baits The Batman Who Laughs into engaging with Batman.  Commissioner Gordon and his son attempt to work out some prior issues.  However they both don Batman Beyond suits and are are immediately engaged in battle with the Grim Knight.  Will the younger Gordon turn on his father and embrace his murderous past?

Is a child version of Bruce Wayne the key to happiness in all of this?  Or has The Batman Who Laughs already glimpsed at Batman’s playbook?

This is not your “Same Bat Time…Same Bat Channel” Batman.

This is the first time that Jock has portrayed on the cover a victorious Batman which leads the reader to make a typical assumption of Batman.  And did the bait work?  Of course it did.  Thank goodness that DC Comics had the foresight to give Scott Snyder an additional issue to conclude/begin this chapter of The Batman Who Laughs.

Bruce’s body is literally been through purgatory to get to this point.  Forget about Bane breaking his spine or any other psychological terror inflicted upon him by the Scare Crow.  The Batman Who Laughs has eclipsed even the Joker as Bruce’s worst foe.

The father/son chemistry between Commissioner Gordon and his son James is spot on.  What a tough spot for a Dad to be in.  And for both of them to confront a Grim Knight who has James Gordon as his mortal enemy in another time line?  This is perfect.  While Gordon didn’t do anything to this Grim Knight, he represents all that went wrong for the Grim Knight’s Gotham City.

B.A.T Man – Because he’s the man who “Buys All Things”….well done Snyder.  This type of writing is very much an homage to Charles Dickens.  Different time lines are having a Scrooge effect, so it is great to see Snyder influenced by older literature.  Or maybe he likes Back to the Future movies?  At any rate, he’s the hot writer right now on so many levels!

Speaking of writing, make sure you “read between the lines” or “connect the dots” as there are hidden messages abound in the dialogue.  In fact, you should read all of the issues again to pick up these Snyder Easter Eggs!

Page 16 of the issue is awesome.  It is reminiscent of a Spawn versus Batman frame I saw one time.  Jock’s artistry is to be commended.

Another c;liff hanger in this issue presents itself.  This is an unbelievable chess match.

Jock’s pencils get a bit frenetic as The Batman Who Laughs battles Batman.  I don’t know if the panels were rushed or if this is a clue to a transformation or not.  His art is always very clean, and this looked a bit rushed.

The only other negative is that we have to wait another few weeks for the last installment.

At this point in the DC time line, I am pretty shook.  The last time I felt this obligated to buy any and all comics was when Superman died, and Batman was broken by Bane.  DC is well on its way to returning to its number one comic line ranking as they have all the right pieces put together.  You would do well to buy all of The Batman Who Laughs issues along with The Grim Knight one shot.  You’ll be glad you did!