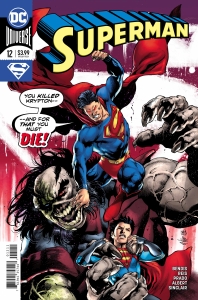 Superman #12: The House of El is united in this SUPERMAN/SUPERGIRL crossover! It’s the House of El against everyone as Superman, Jor-El, Supergirl and Superboy face intergalactic attacks from Rogol Zaar, General Zod and an armada of alien warriors and assassins. With the truth behind Krypton’s destruction set to be revealed, a galactic conspiracy threatens to silence Supergirl and Jor-El if Superman can’t live up to his name.

Crossing over with Supergirl, Superman #12 brings Supergirl and Krypto into the fight against Rogol Zaar, reuniting the entire El family (except Lois who married into the clan). I was glad to see that there is a true sense of family between them.

Clark is touched at the reunion between Jon and Krypto, giving him “a stolen moment that showed me my boy is still my boy.” Clark is also glad to see his cousin, Supergirl. All it takes is a knowing glance for Superman to know that Kara has found something that they can use against Rogol Zaar. And there is a touching moment where we see the whole family having a quick embrace – well the whole family minus one.

It seems that Kara distrusts Uncle Jor as much as everyone else. The more I read of Jor-El since his return, the more convinced I am that this is not the real Jor-El. Even Zod seems more trustworthy and sympathetic at this point. 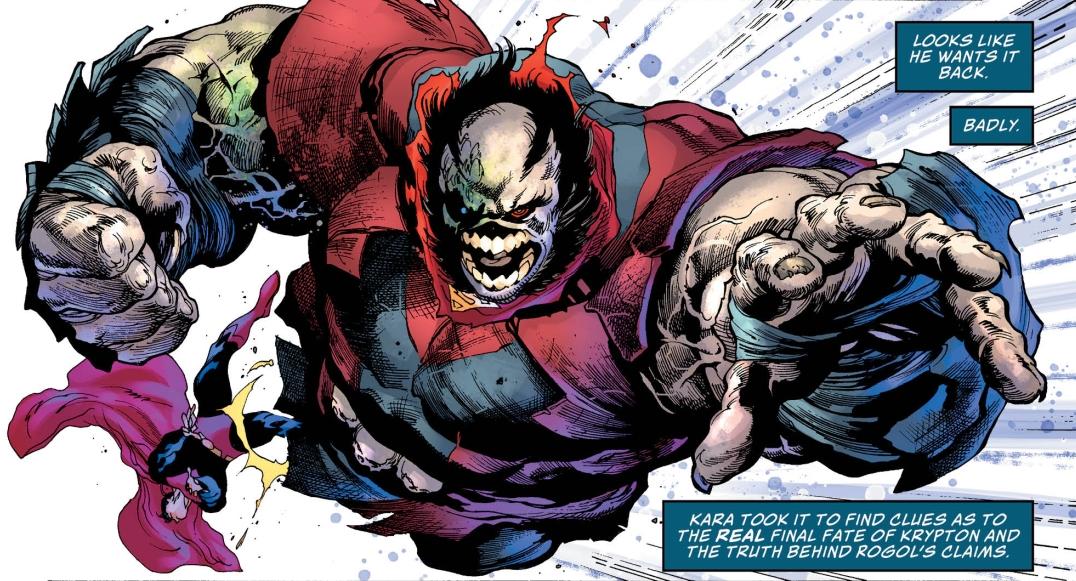 This actually raises an interesting conflict for Clark. Zod and Superman have a super-speed conference, in which Zod reveals he only pretended to side with Zaar to escape the Phantom Zone and proposes an alliance to defeat him. Zod also warns Superman against Jor-El: “He is not what you want him to be.”

The issue ends with Jor-El taking his son back to the remnants of the planet Kryton, where he promises that the answers to all Clark’s questions will be answered. I hope so, as the mystery of Rogol Zaar’s involvement with Krypton’s destruction has been dragged out long enough already.

Supergirl heads back to her own title, taking Superboy with her. I hope this is just a temporary move and not Bendis’ way of sending Jon into another extended stay in outer space, keeping him out of Action Comics and Superman. I still really hate that Jon is no longer his proper age and that none of the Kent family are living together anymore.

Also, I hope that the revelations about Krypton promised for next issue will finally address why Jor-El is acting so out of character. Bringing Jor-El back from the dead was a questionable move, but he has seemed more like a villain than anything else under Bendis’ regime. If Jor-El turns out to actually be evil, it would have been better off to leave the character dead.

I don’t think Brian Michael Bendis is a bad writer. I have liked his work on other comics and much of his writing in this current iteration of Superman. However, I have strong reservations about many of the choices he has taken with the direction of Superman. I don’t feel that the story he has given us so far has justified these changes. Hopefully, he will wrap up this current Rogol Zaar story soon and bring the title back on track with a new story arc.

Review: Batman And The Outsiders #2