Iconic comic creators Frank Miller and John Romita Jr. give their take on Superman’s legendary origin!  Superman: Year One #1 primarily focuses on Clark’s adolescents as he comes to terms with his powers, learns the true potential of doing good, and begins to find himself in a world not his own.

The best of us.  Our greatest creation.  Humanity achieving its maximum potential.  Despite being an outsider, these are just some of the ideals Superman has come to represent in our society. The prospect of doing a Year One title with such a character is a powerful one.  This telling and origin will be judged under the same pressures and lens that so many have been in the character’s history.  Frank Miller, John Romita Jr., Danny Miki, Alex Sinclair, and John Workman certainly seem like they’re up to the task, but the readers are the true judges.  Nevertheless, Superman: Year One #1 opens in a very authoritative and self-aware manner.  This is a story that knows its own importance and is determined to cement itself in history, for better or for worse.

We open with destruction.  A dark red sky painted behind jagged, crumbling buildings and violent explosions as Krypton begins its end.  The white rectangular captions stick out of the gutter like proverbial white flags that know the world has already been lost.  This a moment of doom and chaos.  Destruction and ruin lay before us.  We’ve seen Krypton’s destruction before, but never so unfiltered.  This is a wide, cinematic view of a planet’s destruction, and we’re sitting front and center.  The destruction is unrelenting, and for a brief period of time you’re in awe over its apparent endlessness.

The opening scene is written unlike any superhero comic in recent memory.  In fact, it contains elements from many written mediums other than comics.  It has the devices and flow of poetry, the authoritative command of a play, and the prophetic nature of scripture.  The origin of triumph begins with destruction.  As we narrow our focus on Kal-El, we see the world fragmenting through his eyes. Only shard’s of images appear before him as he’s wrapped in a blanket and placed in the ship.  The view widens as the ship launches from Krypton.  Kal-El is alone now.  The last of his kind.  The writing has become a sort of spoken-word poetry.  Succinct, stoic, fragmented captions decorate the edges of the panels until all that’s left is a baby alone in the depths of space. 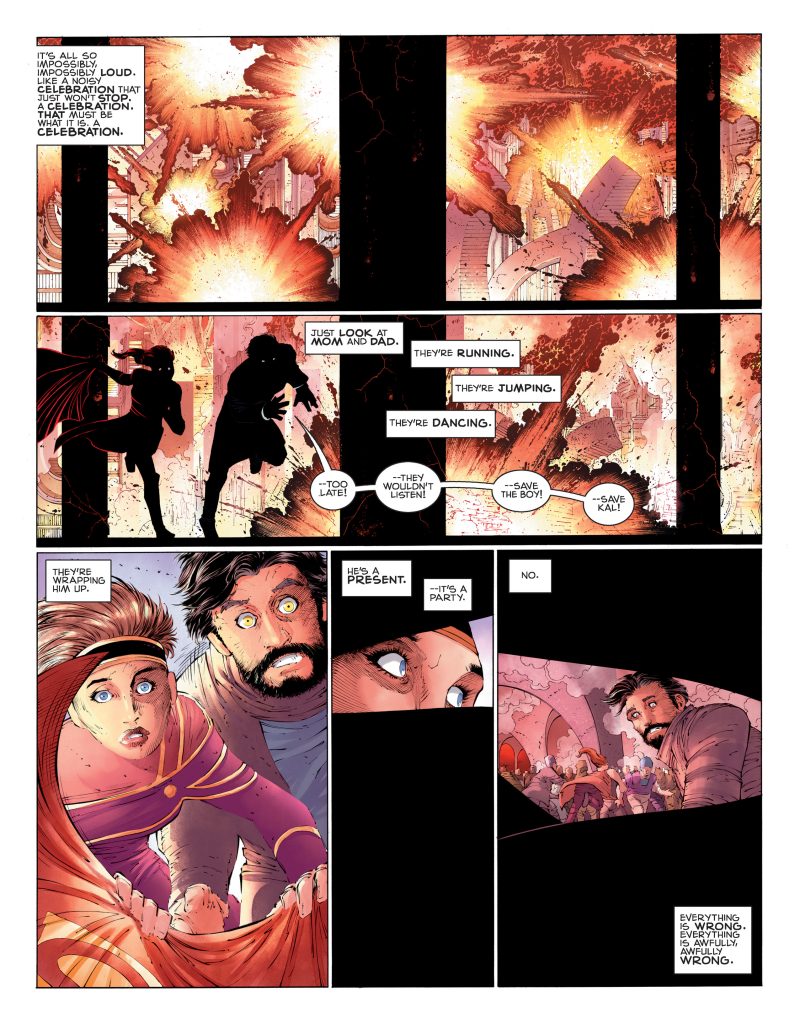 There’s a certain existential beauty to these panels.   They’re rendered with exquisite detail from the entire art team and truly shows the cinematic vastness of space.  The writing transitions to a style of pure word association.  It may seem a bit humorous at first until you realize what this is.  This is the origin of a god that walks among us.  This is a ideal opening its eyes for the first time.  The ship and world before him are depicted in astounding detail.  Miller knows the power of the visual medium.  We can see what Kal-El is seeing and, as a result, the captions become very sound-based.  Rather than crowding the visual with SFX, Miller is using descriptive sensory language to convey the other senses to the reader.

Upon meeting the Kents, an interesting creative decision is made. In many ways it restricts the importance of the Kent family for the purpose of elevating Superman as a being above us.  It is sure to be a controversial moment, but it is one that feels natural with Miller’s more extreme and religious interpretations.  The panels are wide and cinematic, the writing authoritative and heavy because that is how religious scripture feels.   Miller is elevating Superman’s image as a god-like figure as much as possible, and its sure to be a divisive choice, but it does feel new, and so we continue.

Once the Kent family brings Kal-El home, pious atmosphere starts to become enveloped by a sense of the mundane. Kal-el’s prophetic narration is brilliantly juxtaposed with mostly ordinary dialogue from Mr. and Mrs. Kent.  The issue remains sensory at its core but embraces the slow-paced feel of a calm, rural upbringing.  It’s a soothing and refreshing read at this point.  It has an unusual innocence and joy that few books have nowadays, but there are also subtle signals of what is to come.  The sensory details are unlike any comic in recent memory, and they do a great job of translating Clark’s world into language we can understand and marvel at.  It’s a book that revels in the small moments and using them to truly convey the part of himself that Clark has to hide from the world.  It keeps him humble, but has also proven to be very difficult.  He’s a good kid who helps his friends, but others see something odd about him because of how much he’s holding back.  It’s a fascinating element to explore, and you can fee the frustration.  Clark is a boy who has to hold back from being extraordinary in a world where that’s all anybody notices. That’s difficult for anyone let alone an adolescent.

Nevertheless, Clark carries subtle religious undertones throughout the issue.  He finds a group of friends that are often picked on and eventually become more of a following, even being called a tribe at one point.  The childhood journey is structured as much as a tale of ascension as it is about finding oneself.  It showcases Clark learning to accept peoples flaws and to overcome his own while also teach us readers how we can be better.  His natural desire to help people comes through loud and clear, and it’s a beautiful thing to witness. As Clark grows up, the world around him becomes more than just sensory.  It’s no longer just about what things are, rather it becomes more about what they make you feel.  The description becomes more focused on emotion rather than senses.  We no longer simply see how much Clark has to hold back, we can feel the torment and pain surrounding the notion that you have the power to stop malice but cannot immediately use it.  For the most part, the book does a great job of portraying the difficult and necessary lesson that actions have consequences, whether intentional or not, and that leads to the books resolution.

If the beginning is about sensory management and coming to terms with the world around Clark Kent, and the middle is about managing one’s emotions and how to use emotions to inspire others, then the resolution is about action and creating change.  It’s about what Clark does and can do, and this impacts Lana to an extent as well.  Lana is the one that initially creates the change, which is,unfortunately, her only major act in the issue.

The end combines everything Miller has crafted over the past 50 pages or so into a remarkable finale.  The sensory imagery, raw emotion. and brilliant action all intertwine as Clark moves on to the next phase of his life in a series of moments that prove to be beautiful… but also a bit quirky.  Nevertheless, he s forced to end this phase of his life with a tear-jerking goodbye as he moves towards a greater calling.  It’s a truly beautiful moment to culminate what could have been a classic rendition of Superman’s origin told with remarkable grace and beauty. Despite being only part one, this is a complete issue, and could have stood the test of time.

This book could have been the beginning of a classic tale.  It could have been an origin we go back to as one that stands the test of time.  Instead it is likely to become an example of how a few decisions can turn a story into one best forgotten.  These decisions culminate in one, large scene best described as a horrific and catastrophic mistake, but there are some confusing signs of trouble early on.  Many view Superman as a godly, triumphant figure, but to proclaim that the Earth and everything on it was made for him is a step too far.  Superman is supposed to represent the best that humanity can be.  To imply a sense of inferiority and subservience of that magnitude is to sell short humanity’s potential.  Superman is supposed represent the best we can be.  He’s supposed to be a figure who chose to help us achieve greatness out because of our capacity for good.  To imply that we were made for him to lead eliminates a choice pivotal to the greatness Superman represents.  Its only a small line, but it makes all the difference.

Unfortunately, Superman: Year One #1 is largely damned by one needless scene that could have been taken out.  It is a scene where a group of young teenagers attempt to rape Lana Lang.  It betrays the very core of the message of Superman, the message of the issue, and the youthful innocence displayed throughout most of the book.  It is such a needlessly intense, thoughtless, stupid, nonsensical, and harmful portrayal to put in a book like this that it sours the entire issue.  Miller’s choice to include this scene, 2 pages, ruins the other 62 because of how pointlessly destructive this kind of storytelling is.  The kids could have been trying to commit any crime, but Miller decided to make it sexually charged in a book focusing on minors.  It was likely in order to achieve the purpose of DC’s adult “black label” which only makes the decision more ridiculous.  This book could have been a wonderful lesson about bullying that kids could pick up.  Instead it is completely and utterly ruined as a story.  All of the positives that are talked about above fail because of this scene.  It causes an unspeakable anger that almost impulsively causes you to want to put the book down.  It is a completely disgusting choice which should not have been included.