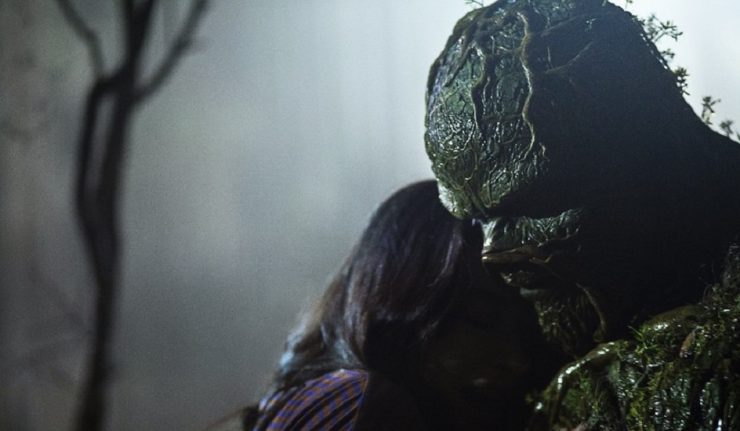 In Swamp Thing 1×04, a mysterious new disease starts spreading through Marais from person to person.  It causes people to see their greatest fears in a sort of living nightmare.  Abby’s coming around to the idea that what’s happening in Marais is more than mere science can explain, and starts to work with Alec to figure out who he is and how to stop this.  Will she be able to stop this darkness from spreading?  watch to find out!

If Swamp Thing hasn’t yet made you squirm with one of its horror scenes, episode 1×04 will finally succeed.  There are some brutal and personal sequences in this episode that may cause you to look away for a few seconds.  Swamp Thing stands out because it’s a show willing to experiment with different types of horror.  We’ve already seen plant-based and body horror, but this episode brings a mental and hallucinogenic type horror that was very unexpected.  The show is able to take these risks because it’s more serialized than most of us were expecting, and that works to the show’s advantage.  There will be a larger conflict that rears its head toward the end, but we are able to discover more about Alec and Marais through these smaller but important pathogens that are breaking out of the swamp.

The lighting and effects were fairly well done in this episode.  If you look closely, it’s easy to spot CGI that stands out and effects that look cheesy, but you have to remember the budget a show on DC Universe is likely to have and suspend your disbelief for a bit.  The effects are better than the prior two shows on the platform and the lighting issues have been almost completely eradicated.

Crystal Reed continues to be the overwhelming star of this series.  She is playing an extremely complex and empathetic character without falling into the usual tropes of a human in a comic book show like this.  Abby has already come around to the belief that this is more than what science can explain by Swamp Thing 1×04.  That’s something we almost never see.  It would be so easy to make her character afraid and skeptical for most of the show, but this show and Crystal Reed are clearly more interested in telling a deeper story, and the show should be applauded for the empathy she shows for Swamp Thing.

It is also worth mentioning that Will Patton is doing a great job as Avery Sutherland.  He is doing a fantastic job playing a truly disgusting man masquerading as the town’s wealthy benefactor.  He’s so charming as he hosts the crawfish dinner at the town hall that you almost forget he just murdered a man last episode, but only almost.  Kevin Durand as Woodrue also does a great job being disgusting throughout this episode.  The way he inhales is one of the creepiest things about this show.  Who breathes like that?

There is some vocabulary that gets used a little too much.  We can tell that there are darker forces at play from the visuals and the lighting on screen.  It does not need to be said every few minutes, nor does it need to be used to describe every large problem in Marais.  It’s something minor, but as soon as people start to notice it, then it becomes a bigger problem, so hopefully “darkness” won’t be used to describe every major threat this season.  The scenes also feel very unconnected and stitched together in this episode, with no clear line to follow or make us care.

Swamp Thing 1×04 takes a bit of a stumble while still holding as one of the best character-focused horror shows out right now.