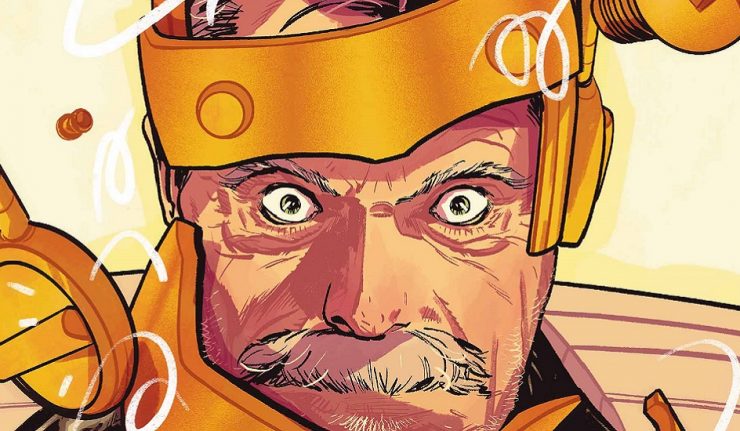 The individual members of the Doom Patrol face some inner conflict only to be finally be brought together by Danny (the ambulance) to take them on to a new challenge.  It’s only Cliff Steele (no longer Robotman) that has a more personal demon to confront when he takes leave of his comrades to visit his mother…what’s it like to be human…?

Gerard Way and Co. are back with more extradimensional weirdness in the form of the Doom Patrol!  Page 1 of Doom Patrol: Weight of the Worlds #1 is everything it should be- shocking, insightful, weird and symbolic.  It’s not until the issue begins to explore Cliff’s newfound situation that page 1 becomes more significant.  As offensive as it could be to some, it is equally insightful as it demonstrates the pleasure/pain dichotomy in the human condition.  It’s crude and definitely potty humor, but it works.  Talk about a “splash” page!

The Young Animal line has always taken a different angle on storytelling.  Nearly all of the titles in the imprint have utilized a metaphorical or symbolic approach.  There’s clearly some satire at work as well, and Doom Patrol: Weight of the Worlds #1 is no different.  As their adventure takes them to a planet of “workout” obsessed denizens, it becomes apparent that the planet’s deity has been replaced.  Turns out these creatures were naturally spherical and a usurping “deity” has taken over to promote health and fitness as a way to leave the round shape behind.  The DP save the day, but at the same time discover the usurping deity is a the mascot for a universe wide fitness supplier!

The most emotionally resonant sequence is Cliff reuniting with his mother.  After regaining his humanity, Cliff goes to see his mother…and, it doesn’t go well.  But, the pain and longing Cliff felt having lost his human form seem to still be with him as he seems just as out of place as a regular human.  James Harvey’s art is exceptional as he draws Cliff as if he still has Robotman’s form, despite being fully human.  The lines, the shapes of Cliff’s head and body communicate his former metal shell, even if it’s not there.  It is some really fine work by Harvey!

As a non-standard comic, Doom Patrol: Weight of the Worlds #1 could be difficult to get into.  But, there is a real emotional and intellectual depth and humor to it that should overpower the unique storytelling method.

For those lamenting the upcoming demise of Vertigo, Young Animal is probably for you!  Doom Patrol: Weight of the Worlds #1 blends satire with emotional resonance and intellectual depth through a thematic approach to storytelling.  It’s aimed at a reader looking for something more, but still manages to retain a sense of “fun!”