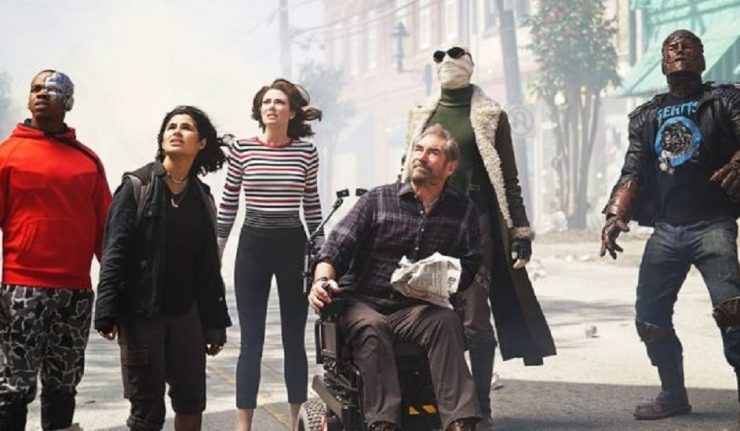 Doom Patrol set the world on fire with its ground breaking first season! Now fans of the show can own the complete first season for their very own!

The series centers around the disappearance of Dr Niles Caulder, and his rag tag group of children must ban together and find who took there beloved “Chief”. Part support group, part team, The Doom Patrol acts as an examination of inner self and issues we all deal with one way or another.

The series earned wide spread acclaim and gained a 95% on rotten tomatoes and took the internet by storm. Fans of the Grant Morrison run enjoyed the on screen portrayal of the heroes from the page and new fans discovered a whole new world of interesting characters and hard tension plot points.

With Blu-ray’s unsurpassed picture and sound, Doom Patrol: The Complete First Season will be released in 1080p Full HD Video with DTS-HD Master Audio for English 5.1. The 2-disc Blu-ray will feature a high-definition Blu-ray and a Digital Copy of all 15 episodes from season one (available in the U.S.).

The first season of Doom Patrol will be available to own on Digital on August 26th (in the U.S.). Digital allows consumers to instantly stream and download all episodes to watch anywhere and anytime on their favorite devices. Digital is available from various retailers including Apple TV, Amazon Video, Google Play, Vudu, PlayStation, Xbox and others. A Digital Copy is also included in the U.S. with the purchase of specially marked Blu-ray discs for redemption and cloud storage.