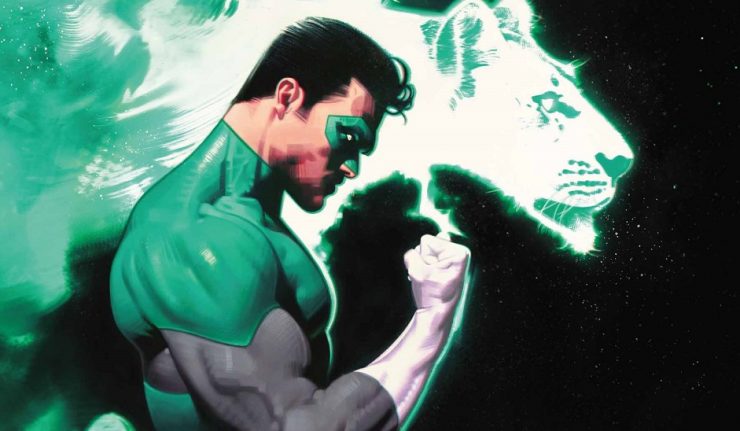 How’s your internal Multiversal Encyclopedia…?  Hal Jordan (apparently undercover) encounters Ah-Bah-Nazzur, (Abin Sur?) on the planet Atmoora.  Something is afoot, as a tragedy has laid waste to a number of super-beings…some vaguely familiar….  Hal seems to think Ah-Bah-Nazzur is the key, but he’s just as shocked when a motley trio of Green Lanterns appear to help!

If you like stories of the Multiverse, then this is a comic for you!  Hal is on Atmoora, the Sword and Sorcery planet.  Hal appears to be undercover as “Sir Hal,” whereas Ah-Bah-Nazzur, first seen in The Multiversity: Society of Super-Heroes, hails from Earth-20.  While there’s not much character work, the plot places surprise upon surprise.

The Supergirl analog that appears in the opening sequence is a Superwoman, Luma Lynai (LL), from “Superman’s Super-Courtship” which first saw print in Action Comics #289 (June, 1962.)  Her very appearance not only demonstrates Morrison’s knowledge of DC Comics history, but his willingness to incorporate whatever he can in his stories.  It seems as if Luma Lynai may get something greater than heartbreak this time around.

The greatest strength of the issue is the plot itself, and the things hidden inside it.  The Green Lantern #9 opens with a mysterious setting and a couple of Supergirl analogs trying to figure out what’s decimated those around them.  The scene switches to what appears to be a Medieval style Hal Jordan…oh, wait, that IS Hal Jordan!

Morrison has presented a mystery while also incorporating various Multiversal characters.  It’s clear this is not a simple “collar” for a space-cop, but some really unique inter-universal hijinks.

The final page with three oddly grouped Green Lanterns lets the reader know that the craziness is not over…it’s just beginning.  Who recognizes the hippie Lantern?

The entry into this story is a little sideways, despite a vaguely familiar Supergirl analog.  There’s a lot to figure out along the way.  It’s definitely not straightforward, but Morrison rarely is.  There’s very little character work, but that’s ok.  Morrison has proven that he will bring that in to play as the plot calls for it.  This issue is mostly set up, but what a set up!

The past couple of issues of The Green Lantern have felt like a research project.  This may not be a good thing.  Or, depending on one’s comic reading experience, it could be a great thing.  Morrison’s love of DC history may be endearing or confounding depending on one’s point-of-view.

After a tilting entry point, The Green Lantern #9 really picks up as it layers the plot with Multiversal references, including Morrison’s own Society of Super-Heroes.  The mystery of the dead super-beings is just the first aspect, but it goes beyond that as Morrison weaves in his penchant for DC Comics lore and the Multiverse.  It’s going to be a weird, fun and nostalgic ride!