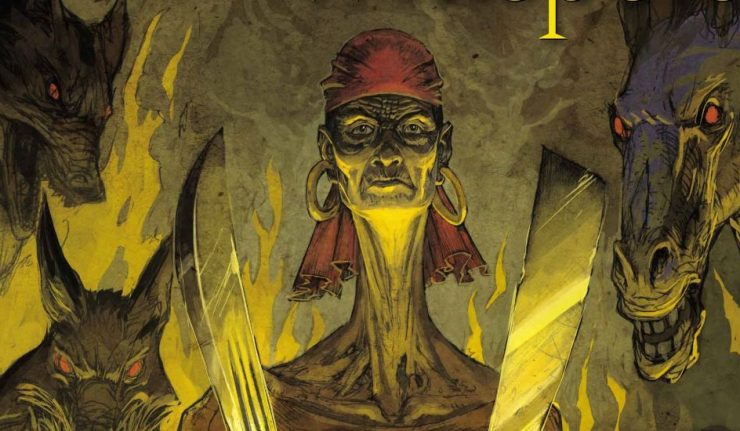 Well, the House of Whispers is full of shouting this month for sure. Lady Erzulie has been killed by Ananse. Seriously, who wants that for anyone let alone a goddess? The easy answer is: No one. However, for Erzulie’s family currently trapped in the Dreaming and for the humans she was trying to protect in New Orleans, this is bad, bad news. Also, since Uncle Monday kind of sort of blames The Corinthian for this. There will be fisticuffs in this this issues between a giant crocodilian humanoid and a pasty guy with mouth-eyes.

The Corinthian does some evil exposition about the House of Whispers and he reads an un-written book by Charles Dickens. We learn that in order for Erzulie’s soul to be returned to the Dreaming, her body needs to actually be eaten in its entirety which causes everyone on earth to forget about the House of Whispers and Erzulie except for one person who dresses up like a wolf and fights off actual wolves.There is a blood sacrifice and then… Well, you need to read it.

For almost a year now, readers have been beaten over the head by me that Domo Stanton is just doing some top notch work on House of Whispers. No matter what else is going on, high quality art is happening.  See this (it contains the aforementioned fisticuffs:

There book has focus. The story line is all about one thing, releasing Erzulie’s soul. The story, while involving quite a few characters is pretty well paced and compelling. I would argue this is the best issue so far.

It is hard to care too much about Erzulie’s soul, Monday’s reaction or anything that happens to anyone because so much of the book has been unbalanced.

As is often the case with a Vertigo title, things get bloody. Beware.

Honestly, if someone wanted to pick up House of Whispers on issue 11, that would be a great plan. If you have not read this book before, now is the time to start. Do not feel compelled to go back to the beginning. In fact, I would not recommend it. This has all the elements of an excellent starting point.