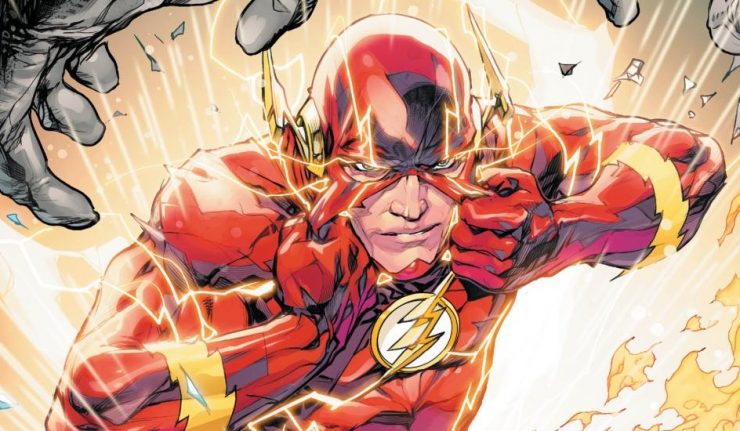 The Flash #75: “The Flash Year One” finale! This oversize anniversary issue marks the end of Barry Allen’s journey to become the Flash—but at what cost? The Turtle’s final play will challenge our hero in every way possible, and by the end of the battle, a Flash will be born—and a Flash will die! Also in this issue, witness Lex Luthor’s offer to Captain Cold, whose icy vengeance waits for the Flash just around the corner”!

This is marked on the cover as an “Extra-sized Anniversary Issue!”, as a Year of the Villain tie-in issue, and as the “Year One Finale!”, which puts a lot of pressure on Joshua Williamson to deliver something special. So does Williamson deliver?

The answer is a resounding yes! He not only fulfills these expectations, but exceed them. There are three stories, and each of them are great, but the main story is amazing.

First off, the two things I love most about the issue, is that I think we have been given our first peek at what the state of the DCU will be after the dust settles from all the reality-shaking crossovers like Doomsday Clock have concluded.

In the second story, Steadfast tells Barry “I showed you your past, Barry! Your true past.” The implication is that Barry’s memories are of the true timeline without Doctor Manhattan’s manipulations to DC continuity.

However the origin, while close to the pre-Flashpoint continuity, contains New 52 elements. This is especially evident in the epilogue, where we see Barry’s first meeting with Wally.

But which Wally? The answer is both. Iris introduces to her nephews, teenage Wally and small child Wallace. This small exchange neatly integrates both the original and New 52 Kid Flashes into Flash history.

There’s also a beautiful two page spread, courtesy of Howard Porter, featuring Barry and other speedster’s he’s met in his career. I was especially delighted to see Jay Garrick, Max Mercury, and Johnny and Jessie Quick, who have been conspicuously missing from Flash history as it’s been shown since the New 52 reboot.

The other thing I absolutely love about Barry is that he has FINALLY recovered his optimistic outlook on life. Remembering how he defeated the Turtle by facing the threat head on instead of running away from his troubles reminded him of what drives his heroic impulses. “I need to race directly into that fear,” Barry narrates, “Ignite the speed inside me to find the one thing the Turtle’s powers can’t take from me. Hope!”

Barry has gone back and forth Barry trying to overcome his pessimistic tendencies, regaining a bit of his optimism and then backsliding again. It appears he has finally recovered it once and for all.

The difference this time is that he’s taking a realistic approach to it. He knows he will has darkness in his past and will encounter more in the future, but he has a new determination to face these dark times boldly, instead of trying to avoid them.

It was also great to see that Iris wasn’t just another helpless victim of the Turtle, but was able to free the citizens of Central City from the Turtle’s control on her own, allowing Barry to focus on his battle against the villain.

The second story shows Barry in the present and deals with the aftermath of Barry’s restored memories. We are shown that Barry has absorbed some important lessons from the experience and focuses him on fixing the mistakes in his past and to ready himself for the troubles coming in the future.

Barry plans to do so by fixing his relationships with Iris and both Wallys, as well as winning over new friends like Commander Cold and the other New Force users. I look forward to seeing Barry interacting with these characters to attempt this. I especially want to see Barry’s reconciliations with Iris and Wally. Maybe this will lead us to Barry and Iris tying the knot.

The third story is where the issue ties into the Year of the Villain crossover event. Captain Cold has been missing from Central City, having been drafted into the Suicide Squad.

Lex Luthor springs Cold from Belle Reve and offers him “what your cold heart has always craved.” Cold is willing to take whatever Luthor is offering, but only on the condition that the rest of the Rogues get the same offer.

I like that Cold still sees the Rogues as a family, even though he’s been alienated from them in recent months. He puts their welfare first, even before Luthor’s offer or taking revenge on the Flash.

This development also raises some questions. With the Suicide Squad title in limbo, will Captain Boomerang return to the rogues with Cold? And what about the two Tricksters? And will the Pied Piper be caught up in this? I would kind of like to see a reunion of the entire Rogues Gallery.

I have absolutely nothing to complain about this issue. The creative team has given us a flawless anniversary issue in The Flash #75. If I really searched, I could probably find a small nitpick or two, but doing so would do a disservice to this terrific issue.

I have been a fan of Williamson’s Flash since issue #1, so I would have been happy if he had only put forth his usual effort. But with this issue, he has totally out of the park. I have a feeling that this issue will eventually be marked as a landmark issue for the character and a watershed moment in DC history.